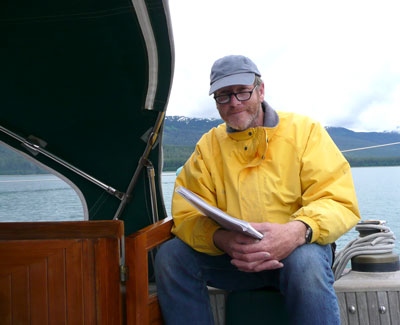 Rob McNeil, a resident of Lopez Island for the past 10 years, died in September at the age of 67, after an 11-month battle with cancer. Rob and his wife Arlene were introduced to Lopez Island by a friend and, looking to slow life down, sold their Craftsman style house on Queen Anne in Seattle, and built a Prairie Style home on Fisherman's Bay.

In his own words, Rob "had a beautiful life." His love of water and cruising began in his youth, with week-long family vacations in the San Juan Islands aboard a 21-foot fiberglass sailboat built in a Seattle cooperative his dad organized. At age thirteen Rob built a speedboat; at fourteen he bought an 18-foot sailboat; and at age sixteen he and two friends formed a partnership and purchased a 26-foot stays’l schooner. His junior and senior high school years were spent rebuilding that boat. His Uncle Wayne, a mine sweeper during WWII, taught him how to build a steam box to replace curved oak plank siding; he learned to laminate and splice fir to the bottom of a six-foot mast that had rotted; he pulled a rusty Gray Marine engine and replaced it with a hand crank marine version of a Model T engine. He dreamed of sailing around the world and bought his partners out after high school.

From the beginning, Rob defined himself rather than letting others do so. He found his meanings in direct experience. A handful of high school teachers mentored him in critical thinking and debate on topics of poetry, literature, philosophy and politics. He became a keen reader. An article in the National Geographic about 16-year-old Robin Graham's sail around the world inspired Rob to write him a letter. Graham responded and invited Rob to visit his Montana ranch: they worked side by side, cutting and peeling trees for log buildings, as Rob peppered him with questions about his experience sailing alone on the high seas. Graham cautioned that whatever Rob read about sailing alone may have little to do with reality.

A columnist for the Seattle Times, Glen Carter, began writing about Rob's dream to sail around the world. Carter had the same boat and loaned Rob a trailer. He launched his sailboat during his senior year and lived on it in Lake Washington. Two years later at age 20, Rob set sail for the South Seas with a sextant, a compass, a radio receiver, three hundred dollars, a three-month supply of water, and dried and canned food. He encountered exceptionally stormy weather one hundred miles off the Oregon coast which scared him. Exhausted, he made port in Newport, Oregon to rest, earn some money and make repairs.

Rob did odd jobs for income. He learned surveying as a chainman in a survey crew, and how to shoe horses. Rob became entranced by his girlfriend’s stories about Montana where she had spent her childhood summers. His dream of sailing off to the sunset fading, they got married, sold the boat, bought twenty acres of land on the Little Spokane River. They purchased two horses and built a one-room cabin. His wife worked to get her master’s in social work at Whitworth College. Rob started a farrier business; slaughtered cattle, pigs and sheep for farmers; and built a barn for his neighbor. They took a job in Spokane as house parents for a group home, overseeing twelve girls ages thirteen to seventeen, working three days on and four off. On days off, Rob built a 24’ x 30’ two story house. An electrician friend taught him how to wire the house; a guy at the hardware store told him how to sweat copper; and the stone work, concrete, tiling, cabinets, roofing, and installation of a well and septic system, he learned on his own.

In 1978, Rob was hired by the Kalispel Tribe to run a summer youth program, which morphed into a Drug and Alcohol Counselor position. Shortly after, he was offered a job as a Land Management Specialist and rode horseback two to three days a week, rotating cattle, harvesting 100 to 200 tons of hay each summer, and overseeing 30 head of buffalo. In order to chase down stray buffalo, he took flying lessons from a 75-year-old woman who flew in WWII. Each fall, Rob and a few tribe members rounded up buffalo, ran them through the squeeze chute for vaccinations, and slaughtered a buffalo for the Pow-Wow.

In 1986, things started to unravel. Rob left the Kalispel’s and the ranch in Spokane and returned to Seattle. He divorced, bought a house and joined a book club which he enjoyed for decades. He shared custody of his sweet daughter. He was hired as a construction manager for a successful stone finishing company and was off to New York to work on a high-end job for one of the founders of a toy company. For the next three years he traveled from Seattle to work on jobs in New York, Atlanta, Charlotte, Orlando, and lastly in Seattle on the Westlake Park and Metro Bus Tunnel. He was exhausted. They had a near impossible job in Lake Tahoe and wanted him to go. He quit.

He bought an apartment building in Seattle, which he renovated and managed. He worked as an independent contractor and became a skilled master craftsman. He dated. He kept up with friends far and wide and enjoyed annual fishing trips to Alaska. He built a home for his parents on nine acres in Seaview, Washington, and began taking over their chores as they aged, including their paperwork and taxes.

But sailing did not remain a dormant dream. In 2001, Rob purchased the Bonnie Lass, a 41-foot Hans Christian, built to sail the world. He had known Arlene since the late 80s, and as luck would have it, they were single at the same time. They commenced with a relationship and married a few years later. Together they sailed the San Juan and Canadian Gulf Islands, explored the waters north to Desolation Sound, circumnavigated Vancouver Island and toured Southeast Alaska for a summer. They purchased a house on Queen Anne and remodeled it together. They worked hard and played hard. They grew a large community of friends, many who later became customers. They traveled to Europe, Mexico, and Africa.

Rob wanted to build the home they would retire in. When Arlene retired from her long-held position at Nordstrom, they sold their Queen Anne house and purchased property on Lopez Island. Construction was completed in 2010. They met their neighbors and joined the Yacht Club. They were introduced to many who shared their same interests and formed lasting friendships.

Rob’s love of people, life and adventure were ever-present. He was the person family and friends could turn to. He cared wholeheartedly in all that he did, gave from his heart, and was loved for his perspective and advice. He was an honest and true man, a role model for balancing freedom with responsibility, for living a life to its fullest, always acting courageously and learning continually.