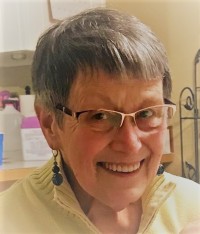 Katherine Margaret Turnbull, age 81, went home to be with the Lord while surrounded by her family on Sunday, February 16, 2020. Kathy was born May 4, 1938 to Adelbert and Elizabeth (Kramer) Frizzell, their only child, in Seattle.

She graduated from Highline High School in 1956. Following graduation, she attended Western Washington College where she met her future husband, Dean Turnbull. Dean and Kathy were married in 1957 and they began their lives in education, coaching and family.

Their first son, Peter, was born in 1962 followed by Rod, in 1965. In 1967 they moved to Friday Harbor and became owner/operators of Lonesome Cove Resort. That year they also welcomed their daughter, Janet. After selling Lonesome Cove in 1978, Kathy went to work for San Juan County in the Treasurer’s Office and became the elected Treasurer in 1995 until her retirement in 2006.

Throughout her life she was known for helping with youth activities such as Cub Scouts, Youth groups, Key Club and always a fan of any FHHS Wolverine sport but especially basketball. She also was a Kiwanis member for many years. Kathy loved the Lord and was active in many aspects of Friday Harbor Presbyterian Church where she served on the North Coast Presbytery, as well as taught Sunday School, served with Mary/Martha, and was often found working in the kitchen. She loved to cook and frequently made meals for others and provided cookies for coffee hour.

Kathy was preceded in death by her husband, Dean, in 1980.

A Celebration of Life service will be Saturday, March 7, at 12 noon with Dr. Greg Lund officiating. A reception to follow at the church.

Memorials in Kathy’s name can be made to