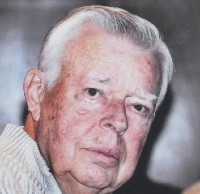 Robert V. Nieman, age 90, died in his home on Friday, April 3 after a week in hospice care. He was faithfully tended in his dying as in his living by his wife Patricia Beecham Nieman, to whom he was married for 42 years.

Bob was born in Walla Walla, where he also graduated from high school. He attended Pacific Lutheran College, Tacoma, earning a BS in chemistry in 1950. After college, he married Barbara Rommel.

He served at the USAF School of Aviation Medicine in San Antonio during the Korean Conflict. Following his military service, he and his family moved to Spokane, where he worked in the family business, Inland Motor Freight. During his professional career of more than twenty-five years, his family moved many times as he served in local, regional, and national management roles for various transportation companies.

Bob and Pat married in 1978 and moved to Friday Harbor in 1980, incorporating as Second Wind Enterprises, Ltd. Together they owned and operated Nieman’s Fine Gifts, Harbor Rental, and Island Petroleum. He was a realtor with Windermere Real Estate in both commercial and residential sales. Bob attempted retirement many times, remarking, “Golf is only fun if you don’t have to do it.”

Bob was an active member of the Lutheran congregation in every community in which he lived. His faith was central to his character. He taught Sunday School, sang in church choirs, and served on congregation councils in many roles.

Bob’s lasting legacy is his devotion to and pride in his family. He delighted in his children, Joanne Hinkle and James (JoAnn Post), his granddaughters Clara Nieman (Joseph Malack) and Madelene Nieman, and his great-grandson Theodore Nieman. He is also survived by his sister-in-law Stella (Anderson) Nieman, and many nieces and nephews.

Any memorials may be made to the San Juan Community Theatre, Lutheran Church in the San Juans, or the charity of your choice.

Funeral arrangements have been postponed until the Covid-19 stay-at-home orders have been lifted.