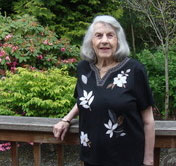 Viola Bertha Welchko went to heaven on April 13, 2020 at Sunrise Assisted Living, Danville, CA She was 104 years young. Viola was born June 19, 1915 in Colville, WA the daughter of Sylvester and Bertha (Ryker) Houck.

Viola and her twin sister, Bertha were the youngest of 8 children. In September 1924, the Houck family made an eight-day trip by horse-drawn wagon, driving cattle to the Kootenai Valley near Porthill, Idaho.

Viola met her lifelong partner, Charles Lewis Welchko in 1929 when they were both attending Bonners Ferry High School. Their first date was on Valentine's Day in 1930.

Viola attended State Normal School in Cheney, WA which at that time was a college for training teachers. In 1935 she transferred to Washington State University and joined Alpha Gamma Delta sorority.

Charles and Viola were married in Spokane in 1938 and were together in this world until his death in 2005.

Viola started her fashion career in Spokane with the Crescent Department Store, moved to Seattle’s Rhodes and was the Fashion Coordinator for a chain of West Coast women's stores.

In the mid 50’s, Viola was a part of Seattle’s morning show “Telescope” on King TV. At age 40, she was the 1st exercise lady on TV and produced the program's first fashion show. Success in her field led her to free-lance modeling and becoming the Director of Models for Elizabeth Leonard School of Fashion.

Charles and Viola bought and developed a 30-acre farm in Kent, WA where in addition to full time jobs, they raised cattle, chickens, and their only child, Marla.

Viola continued her fashion career and service to others by starting VI’s School of Charm and Modeling in the basement of their home. Viola was the Director of the Miss Kent Pageant from 1960-1973 and served on the Board of Directors of the Miss Washington Pageant.

Her community involvement included Soroptimist and President of Kent Orthopedic Guild. She was honored in 1965 as the community's “Woman of the Year”. Fitness was a lifelong passion, as she enjoyed golfing, hiking, camping, snowshoeing and got her private pilot’s license.

After selling their farm in 1978, Viola and Chuck moved to Anacortes to pursue sailing in the San Juan Islands. She was an active member of the Anacortes community for 33 years until moving to California in 2011.

Viola was preceded in death by her husband, Charles (2005), her brothers: Marvin, Edward, Raymond; sisters: Margaret, Erma, Leta and her twin Bertha (2006).

Viola is survived by her daughter, Marla Welchko of San Ramon, CA and grandchildren: Luke and Hannah.

Interment will be in Bonners Ferry, Idaho.