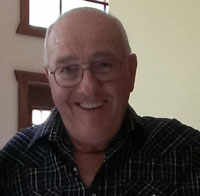 John Burton was a 3rd generation San Juan Islander who passed from this world on January 24, 2021 at his home in Wellton, AZ with his wife, Eve Burton by his side. John battled cancer for the last 10-11 years, before it finally got the best of him as it advanced through his bones at age 79.

Johnny Burton (as he was known by many) was born in Friday Harbor to John and Audrey Jakle Burton on October 14, 1941. Growing up, he and his sisters (Carol, Mary and Susie) worked on the family farm, he served in Vietnam, and made several trips to work and fish in Alaska. John was married to Mickey Bauer in 1968 and together they raised their son, William (Bill) Roy Burton and he raised two step-daughters, Lisa Burton James and Monica Blomgren.

During his lifetime in Friday Harbor, John served on the Town Council, owned a couple of businesses including J. B. Redi-Mix and John Burton Sand & Gravel. John was an avid hunter, whether it be rabbit, deer, elk or moose and could keep you mesmerized by his retelling of his adventures. He became an avid fisherman in his retirement, learned to fly RC Airplanes, taught himself to make fishing lures, and enjoyed reading. Old western music was definitely tops on his list!

John and Eve were married in 1992. Later, the two of them started Burton Building Consultants working with Timberland Custom Homes assisting new homebuyers to prepare their site for their new home. They spent many years as “snowbirds” in their RV and became “full timers” when they retired. Around 2007, they decided to move off the island and headed to Winthrop, WA before permanently moving to Wellton, AZ after he was diagnosed with cancer in 2010.