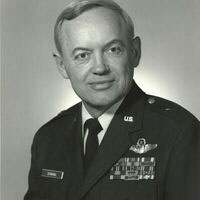 From 1956 to 1959, he was assigned to his first operational squadron--the 7th Tactical Fighter Squadron, 49th Tactical Fighter Wing, Etain Air Base, France, flying F-86 and F-100 aircraft. Upon return to the states, he served as a senior air surveillance officer with Air Defense Command, and as a space systems analyst.

During 1966, as a Major, Gerry piloted the A-1E Skyraider serving as an aerial gunnery instructor for American and Vietnamese pilots at Hurlburt Field, Eglin Air Force Base, Florida. During 1968 he flew 145 night combat missions in A-1s from Nakhon Phanom, Thailand and Bien Hoa Air Base, Republic of Vietnam, where he served as a squadron operations officer in Project Tropic Moon with the 56th Special Operations Wing.

Upon his return to the United States in 1969, he was assigned as Chief of the Programs Branch, in Air Force Systems Command, Andrews Air Force Base, Md. providing weapons programs test support. During 1971 he returned to Wright-Patterson Air Force Base in flight test engineering and flying as a test pilot.

As a senior officer, he served as Deputy Director and Chief Engineer of B-1 Bomber development, Director of Engineering for the Intercontinental Ballistic Missiles Program Office, and as Program Manager for the Advanced Medium Range Air-to-Air Missile. He was Deputy Commander for Research, Development and Acquisition, Armament Division, Air Force Systems Command, and as the principal Deputy for Tactical Systems, where he provided program direction for the F-15, F-5, A-10 aircraft, the Maverick missile, and the Advanced Tactical Fighter program.

Gerry and his wife Ginny have since resided on Lopez Island, Washington where he was very active in community service planning, the Church, and organizations supporting island residents including The Lopez Island Lions Club, the Lopez Union Cemetery Board, and the Lopez Senior Services Committee. He enjoyed gardening, carpentry, painting, and Bible studies with friends too numerous to count. Gerry and Ginny have cherished their many friends in the island community for over 30 years.