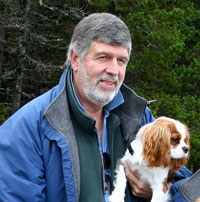 Robert Bruce Benton died on October 27, 2021. He was born January 18, 1941, to Daniel and Lucille Benton in West Seattle, and lived in California for many decades before relocating to Friday Harbor where he lived since 1995. He graduated from Arroyo High School in San Lorenzo, California in 1959. He was an outstanding athlete who earned a scholarship to Santa Clara University in California, where he received a bachelors in mechanical engineering (1964) and an MBA (1965). He married his high school sweetheart, Bonnie Jean Okey in 1961, and they had two children, Lisa and Michael. They divorced in 1987. He married Patricia Pickering in 1989.

Robert loved airplanes and wanted to fly for the military, but at 6’ 8’’, he was too tall to fit in the cockpit of a fighter jet, so he did the next best thing and sold aircraft for Northrop Aviation. He traveled the world for weeks and months at a time in Southeast Asia, North Africa, and the Middle East, marketing the F-5 light fighter aircraft to governments in Thailand, Malaysia, and Saudi Arabia among others.

He was also active in the design, development and the marketing of the F-20 Tigershark. When Northrop abandoned the F-20 program in 1986, he retired to start his own aviation consulting company, where he helped refurbish older jets as trainers.

As an avid pilot he owned several small private planes; his most cherished was the Navion. The Navion gained a great reputation among military fliers as there was a military version called the L-17 which was used as a military liaison aircraft that saw service during the conflict in Korea. Many will remember Steve Austin, the character in the TV series $6 Million Dollar Man flying one of these routinely. We joked that that Navion probably cost $6 million to keep in good flying condition.

Robert was also a superb photographer. He converted a downstairs guest bathroom into a dark room, and over the years he filled numerous storage boxes with slides and photographs that chronicled his family. He attended his daughter’s and son’s softball, baseball, basketball and football games, with a Nikon camera or two in hand, and lenses and film canisters tucked in the pockets of his photographer’s vest.

Beginning in 2002 Robert and his wife Patricia served the Friday Harbor community for more than 10 years as volunteer EMTs. They were often seen driving their black Ford Bronco on calls at all times of the day and night. Robert helped to drive ambulances and boats and also assisted with air transport. They considered the EMT community of Friday Harbor a second family. Robert’s dedication of time and service as an EMT made the community stronger, healthier and safer.

Robert was stern, and sometimes brusque, but he also enjoyed a good pun, believed dogs were pure positive energy, discovered spirits living in rocks, driftwood and sea glass, displaying these whimiscally around the house. He developed an affinity and appreciation of Native art, especially Central Coast Salish art, and philosophy. He also loved off-road riding and hillclimbs on his classic BSA 500 motorcycle. He called himself “Beezer Bob” and his son, Mike, notes he still "owes 11 hills."

The family will hold a celebration of life in April of 2022 and ask that any donations made in Robert’s honor go to the Friday Harbor Whale Museum (whalemusuem.org), or the San Juan Island EMT Association (PO Box 1243, Friday Harbor, WA 98250).