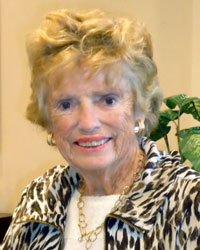 Joan Congdon slipped peacefully away from us on December 3, 2021, at the age of 94 in Lynnwood, WA with both of her children at her side. Joan was the third of four children born to Malcolm and Mary Emma (Mae) MacLeod of Lopez Island, WA. Raised on Lopez Island, Joan was born in Vancouver, B.C. when Mae went into labor while visiting a sister-in-law who lived there. This detail caused some confusion when Joan applied for her first US passport many years later as an adult!

Joan’s father had followed other family members to the Pacific Northwest from Stornoway, Scotland. He received US citizenship through his service in WWI and bought a farm on Lopez. Joan’s mother Mae had been born and raised on Lopez but had spent WWI nursing soldiers in England. They met on Lopez, were married there in 1922, began their family and worked in partnership on their dairy farm.

The depression years left an indelible mark on Joan and were reflected in her innate kindness to others, an appreciation for all the small joys of life and her commitment to community service.

Joan left Lopez for Sedro Wooley to finish high school because Lopez at that time did not have a high school. A naturally shy person, this was a difficult time as she was very homesick. She worked as a nanny and at a newspaper office to earn her room and board. After high school, she attended Washington State University and there the next chapter of her life began.

While she earned her B.S. in Home Economics, she pledged Alpha Delta Pi sorority where she made life-long friends. She met the love of her life, Robert Congdon, at a dance. A classic love story, their eyes literally met across a crowded room. Joan was a beauty and Bob was a handsome and outgoing engineer. They married in 1951 in Bellingham.

Their life together started out in Portland, San Francisco and Vancouver, WA. In the early years, Joan enjoyed working at a department store and developing her skill as a talented cook and home maker. She was active in garden club, an interest she continued throughout her life, and she became very skilled at floral design. They had two children, Lynn and Craig and the years became very busy.

Bob’s successful marketing career with Chevron took them to Baltimore, MD and finally back to San Francisco, CA. Both Bob and Joan had a genuine gift for friendship, making friends everywhere they went. As Bob’s career grew, Joan excelled as his partner. She ran a perfect home and was a consummate hostess for private, corporate or neighborhood functions.

Wherever she lived, she volunteered at church and school and became very attached to her work in hospital auxiliaries and thrift shops. Having grown up with very few clothes that were always ‘hand me downs,’ she never lost the thrill of having something new or finding treasure in the most unlikely places. She and a good friend started an Ultrasuede clothing business in the 1980s and had a ball doing it.

When Bob retired, they moved to Tucson, AZ and enjoyed a snowbird lifestyle, migrating to their home on Lopez during the summer months and golfing year- round. Joan was a very good golfer, earning many club accolades. They enjoyed traveling, especially visiting with the many friends they had made over a lifetime.

In 2005 they moved full-time to Lopez Island where they had enjoyed the wonderful community they found there. They were both active in the Lopez Senior Center and Joan loved her work at the Lopez Thrift Shop. After a lifetime of devotion and 63 years of marriage, Joan lost her beloved Bob in 2014.

The years that followed were difficult but perhaps Joan’s best memorial. Valor is not always found in expected ways and Joan displayed a quiet courage all her own in these years. She was patient and kind to all she knew and never complained, even as she lost her physical abilities. As she said, “Well, you have to make the best of things.” She never lost her wonderful sense of humor or interest in others.

Joan is survived by her son, Craig Congdon, of Medford, OR, her daughter, Lynn Randelman (Paul), her sister Gwen Lamb of Green Valley AZ, Grandsons: Jon (Jessalyn) and Matt (Stefanie) Randelman; many nieces and nephews and countless friends.

In an incredible coda to Joan and Bob’s story, Joan passed on the same day as Bob, seven years to the day. A Celebration of Life will take place this summer on Lopez Island.

The family wishes to thank the communities of Chandler’s Square and Aegis Living of Lynnwood for their caring support of Joan and to all Joan’s friends who visited, called and wrote over the last seven years. Joan loved you all so much. If you would like to donate in Joan’s memory, please consider The Lopez Thrift Shop or The Lopez Senior Center.