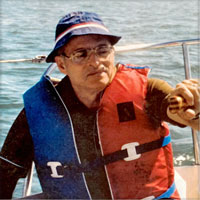 Norman C. Stewart, longtime resident of San Juan Island, dies at 92. Born in Palacios, Texas in 1929, Norman Carroll Stewart passed away peacefully on December 23, 2021, surrounded by his family, at his home on San Juan Island, Washington.

He is survived by his beloved wife Barbara; his children: David, Maggie and Glenn; his five grandchildren: Christopher, Gregory, Elizabeth, Katherine and James; his great grandson, Blaine; his sister Sara; several cousins, nieces and nephews and his beloved dog, Baxter.

He attended Houston public schools and earned his bachelor’s degree in Chemical Engineering at the University of Houston in 1951. Upon finishing college, he married Elizabeth Lilly of Houston and together they had six children. He was to see his first wife and three of his children die before his own passing.

Norman was a world-class chemical engineer who was awarded many patents for complex processes, some at the atomic level. Amongst his many passions was music, to that end he formed a 12-piece orchestra when he was 17 years old, and called it “Norman Stewart’s Night Serenaders”, and played venues all over southeast Texas. In addition to his interest in the sciences, humanities and music, he was a master craftsman with the medium of wood. He was also very passionate about racing his high-performance sloop, mostly in Louisiana.

Although Norman was modest about his accomplishments, he enjoyed talking about his orchestra, music, and sailing. Later in life, golf became a love that he also liked to share. In addition, his sharp wit and humor were exhibited in his legendary laugh.

Since he was profoundly well-read on many subjects, he was able to engage with people from every walk of life. As with many men of intellect, his quest was a striving for clarity.

When asked how he would like to be remembered, without hesitation he quoted Albert Schweitzer, whom he revered: “My life is my argument”.

As with all of his accomplishments, it is fitting that Norman Stewart will be remembered by most who knew him for his compassion, boundless kindness and generosity. He will be greatly missed by the many people whose lives he enriched.

In lieu of flowers, the family requests that honorary donations in Norman’s name be made to the Animal Protection Society-Friday Harbor | Mailing address: 938 Cattle Point Road, Friday Harbor, WA 98250 | Phone: 360-378-2158.

A Memorial Service will be held in Friday Harbor at a later date. Due to Covid 19 precautions, the service will be limited to vaccinated individuals. For those unable to attend the service, it may be observed via livestream.