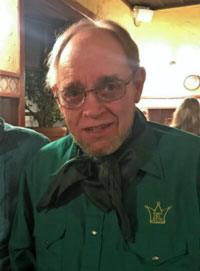 Robert A. Folk (Bob) lost his battle with cancer on December 21, 2021 at the age of 76. He was born in Bellefontaine, Ohio August 29, 1945 and was the oldest of three boys. Bob grew up in New York and he enlisted in the Navy at the age of 17. He actively served during the Vietnam War from 1963 to 1966 as a plane captain for his squadron, who flew surveillance missions. He was discharged from Whidbey Island Naval Base and ended up staying in the area for the remainder of his life.

Bob married his wife of 45 years, Vernette and they made their home on Orcas Island. He spent most of his employment years driving trucks. He was not afraid to jump into new adventures and had many interests from playing softball, umpiring baseball, refereeing basketball, downhill skiing, restoring John Deere tractors, raising pet Watusis, and supporting the American Legion. He was responsible for organizing the Legion’s Color Guard on Orcas and served as Commander of the Post from 1981 through 1985. He was a devoted Veteran and very proud of his service.

Bob was proceeded in death by his son, Kyle and his brother Richard Folk. He has had several friends, cousins, nieces and nephews and a very special relationship with his brother James Folk who resides in Oregon with his family.

A celebration of life is planned for this spring.

To share memories of Bob with the family, please visit his online obituary at www.evanschapel.com to sign the virtual guestbook.