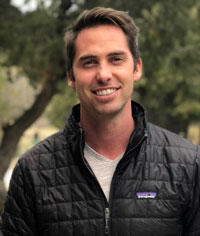 Jamin Roy Franklin passed away July 13, 2022 after a seven month battle with cancer. He was 37 years old.

Jamin was born June 8, 1985 in Mt Vernon, WA to Steve and Holly Franklin. He was a twin and he and his brother, Marc, came into this world too early, their lungs had not yet fully developed and the two boys were immediately transferred to the University of Washington’s Neonatal Ward. It was a very close thing but both boys survived and within a month they were home in Friday Harbor, WA.

At the age of one, Jamin’s family moved from the San Juan Islands to Los Alamitos, CA. Everyone thought it was going to be a short six month stay but instead it turned out to be the place where Jamin would grow to adulthood. Jamin made many of his lifelong friends while living in Los Alamitos, they would spend the long summer days taking the bus down to the beach and spend the whole day body boarding and skim boarding and he loved to finish up by getting a surfer special with orange bang at El Burrito Jr.

He played soccer and lots of baseball growing up and; in winter he was always snowboarding and adventuring with his friends. It was a wonderful place and time to be a kid growing up.

At fourteen, Jamin and Marc started working summers full time with the family business at the Long Beach Airport. He worked with an adult crew loading and unloading the aircraft. The day began very early and the work was hot and physical but by summer’s end Jamin had learned how to truly work. He always took pride in that hard work ethic and never forgot it.

In 2009 Jamin met his future wife, Anne Jeffrey, a bright, attractive, and industrious Canadian girl that loved to travel and explore the warm sandy beaches of the world. Together they traveled every chance they could and vacationed in many tropical paradises.

Jamin and Anne welcomed their daughter Nia to the family in December of 2021 and that precocious little girl instantly became the joy and focus of the life. In 2018 the family moved to Tampa Florida and purchased the perfect little home.

Anne worked as a program director for the YMCA and Jamin was now working with his brother Marc managing the family business at Aeronautical Services in the San Juan Islands. It was a heck of a commute for Jamin but he made it work. The two brothers working together was a wonderful pairing, they had different strengths but they complimented each other perfectly.

One of Jamin’s greatest strengths became apparent back in fifth grade when he was appointed to the position of playgrounds “conflict manager”. For this high honor he was playfully teased by family and friends for the rest of his life. If there was ever a dispute or argument, someone would invariably say with a chuckle “take it to Jamin, he’s supposed to be the conflict manager!” As it turned out, whoever was responsible for appointing him playground conflict manager back in fifth grade knew something. Jamin truly had a gift, wearing his beautiful smile he was always genuine and friendly, never lost his temper, always saw both sides and his empathy had no bounds. If there was a problem to be resolved, that fifth grade conflict manager was the one we all learned to count on. He was loved by all who knew him and he will be missed.

A memorial service will be held at 11am, Friday August 19th with a reception to follow at the Bayshore Community Congregational Church in Long Beach, CA.

Donations may be made in Jamin’s name to the Humane Society of Tampa Bay or the Surfrider Foundation.