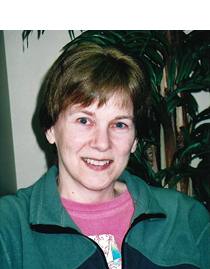 Kristen Carlberg, beloved daughter of Ed and Betty Carlberg of Friday Harbor, died on November 13, 2011, at age 60 in Portland, OR, almost four years after a diagnosis of metastatic colon cancer. Kristen was a scientist, an animal lover, and photographer.

Her love of animals was shown by her volunteer work at animal shelters and rescue centers, fostering of homeless kittens, participation in bearded collie associations and competitions, and devotion to her own cats and talented dog.

She was an expert photographer who could get any cat to smile for the camera. She photographed hundreds of cats for adoption ads, as well as all kinds of wild animals encountered during her travels.

She traveled extensively throughout the U.S., including a bicycle trip from Seattle to Baltimore, as well as in Europe and Japan. Landscape photography from her travels will be cherished by her family.

She married Mark Pennak in the Roche Harbor chapel; they later divorced.

In addition to her parents, Kristen is survived by a sister, Karen, of Spokane, and her brother, sister-in-law, and niece, Robert, Debbie, and Sören, of Edmonds.