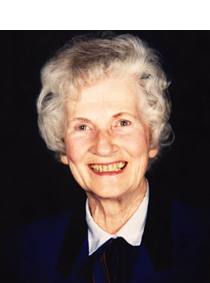 Gwen Bryce Seidl passed away on November 23rd, 2011. She resided at Horizon House in Seattle, Washington at the time of her death.

Gwen was born in Des Moines, Iowa in 1917, the daughter of a Presbyterian minister and his wife. She was a descendant of Lord James Bryce, the author of The American Commonwealth. Gwen's formative years were spent in Marquette, Michigan.

She attended the University of Michigan at Ann Arbor, studying architecture, and later received a degree and teacher's certificate from Northern State Teacher's College in Marquette.

Following graduation she taught English and drama at Menominee (Michigan) High School, where she met her husband and lifelong companion, Robert J. Seidl.  They were married in 1941.

Gwen and Bob had three children, all born in Madison, Wisconsin. They moved to the Seattle area in 1957, when Bob began a new career at the Simpson Timber and Paper Companies.

Gwen designed the longtime family home, constructed in Bellevue in 1959. She lived there until moving to the Horizon House in 2002, except for a ten year period when Bob’s career took them to San Francisco.

In the middle 1960s she designed and supervised the construction of the family summer home and shop/studio on Shaw Island in the San Juan Islands in Washington.

Throughout her life Gwen had a passion for the arts. Immensely creative and with a great command of the language and a sharp sense of humor, she painted and wrote poetry throughout her life until robbed of her abilities by Alzheimer's disease.

She was a long time member of her church choir at Bellevue Congregational Church, singing for years and creating colorful banners for significant church events.

Gwen maintained and managed the family home until late in her life.  She had a keen sense of design and order, which were reflected in the beautiful living spaces she created in her family homes.

She loved a good conversation, and both possessed and appreciated good wit. Much poetry and verse, including whimsical items, appeared on short notice and greatly enhanced family life.

Gwen was predeceased by her husband, Bob who died in 2009.  She is survived by their three children, Lynn Whitford (Bill) of Madison, WI; Bryce Seidl (Chris) of Seattle, WA; and David Seidl of Walla Walla, WA; six grandchildren, five great grandchildren and many nieces and nephews.

Gwen has been buried next to Bob on Shaw Island.

Remembrances may be sent to the Shaw Island Library and Historical Society, Shaw Island, WA 98286.