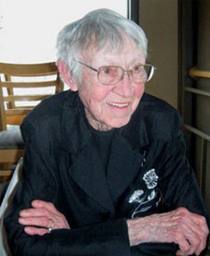 Our mother, grandmother, and great grandmother, Wilma, left her battered body in order to enter a place of peace and health. She had a mercifully brief struggle with cancer and conceded only 30 hours short of celebrating her 90th birthday.

She is survived by her son, Bill Bailey, his wife Shannon; her four grand children: Eli, Ben, Sam, and Kestrel, and great grandson, Keegan; all residents of San Juan Island.

She is also survived by her two brothers, Robert Grebel and Wayne Grebel, both in Southern California. She was preceded in death by her husband, Morris.

Wilma was born in Scotts Bluff, Nebraska, and moved to San Diego in 1942, where she married her husband of over 50 years, Morris.

In 1964 after working as a nurse in a San Diego doctors office for many years, Wilma and Morris bought a small custom printing business in Del Mar, California. Together with their son Bill they ran this business until closing it to move to San Juan Island in 1989.

Locally, Wilma was active in the Lions Club, where she was in regular attendance until her final illness was upon her. She was an active member of Friday Harbor Presbyterian church for many years, and volunteered there in many capacities.

Her passing leaves spaces in many peoples lives, and we will all miss her until we are reunited.

A Memorial Service will be held on Saturday, October 3, at 1 p.m. at Friday Harbor Presbyterian Church, 425 Spring Street, Friday Harbor.