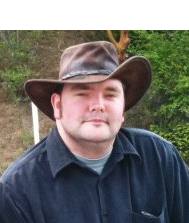 Rory Curtiss VanHyning was, in this day of technology and indifference, a Renaissance man. He believed in old-fashioned values such as friendship, loyalty, integrity and compassion. He was a serious man, concerned with the world's issues yet with a sense of humor that is well remembered by his friends and family.

He loved words and expressed himself with a vivid vocabulary that often seemed at odds with modern sensibilities, but he refused to compromise his standards and was always striving to expand his boundaries.

He was an avid fan of motion pictures, and had an almost encyclopedic knowledge about movies. His all-time favorite was the classic Lawrence of Arabia, which says much about Rory's deeply - held beliefs about honor, his love of history and his lifelong commitment to moral justice.

A 1995 graduate of Mead High School in Spokane, WA., Rory loved literature and drama and was active in school productions. He also loved history and was an ardent student of the American Civil War period, which led him from an early age to assemble an impressive collection of books and information about that period and the many facets involved in the conflict.

The photo shown here was Rory's senior high class picture, which he made arrangements for on his own.  Its uniqueness truly represents the man Rory would become – dramatic, seriously committed, and thoroughly immersed in things that interested him.

Rory joined the United States Navy in 1999 and was stationed in Guantanamo Bay, Cuba and later at the NATO base in Reykjavik, Iceland. He became a journalist and was always proud of his chosen career as a radio announcer and later news reporter. He was very proud of his service to his country and seriously considered staying in the military as a career, but his love for the Northwest and his family brought him home at the end of his five-year enlistment.

He immediately enrolled at Washington State University, where he majored in Communications with an emphasis on Broadcasting. He was accepted into the Morrow School of Broadcasting and was also involved in WSU student productions, working briefly for the Northwest Public Radio station based on campus.

After graduation in May of 2006, Rory went to work for Inland Broadcasting Services, Inc. as a news reporter based in Moscow, ID. He later became the news director and enjoyed interviewing local politicians, community leaders and state officials.

He was known on air as Rory Curtiss, and privately his family affectionately called him "The Voice of the Palouse". He loved living in Moscow and made many friends there, keeping as always his ties with friends from Spokane, his Navy experience and others he met along the way.

In September of 2011, Rory accepted a job at KXLY News Radio 920. He was the producer of the early morning radio news show, and was just beginning to expand his "beat" of the Spokane Community. He greatly enjoyed working for Bud Namek and was impressed by the professionalism of those he met at KXLY and the respect he found among them.

He was delighted by his four nieces: Kylie and Kiersten Blodgett, and Evalena and Ariella Faucher Blodgett. He also was dearly loved by his grandfather, Jim McAnally of Pasadena, TX., his aunt Susan (Larry) Tomson, and a very long list of relatives, friends and acquaintances who have so kindly left Facebook messages for him.

Rory loved animals and was always concerned for their welfare. Remembrances can be made in his honor to the Spokane Humane Society or to any animal shelter of choice.