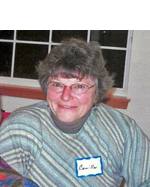 Our beloved mother and grandmother Camilla Woodbury of Friday Harbor Washington passed away on January 25 after a short but brave battle with lung cancer. She was born in Tecumseh Michigan to Lyle and Dorothy Grigg. She graduated from Tecumseh High School in 1961 and Eastern Michigan University in 1966.

Camilla was a strong and feisty woman, a true pioneer with a good heart. She was the only girl "paperboy" in Tecumseh and the only woman in her college calculus class.

She drove a truck and trailer, 86,000 lbs. for Borden Chemical Company, working twelve to sixteen hour days, for twenty-four years! She performed this grueling job as a single mother, putting her two children through college.

When Borden closed she moved to Friday Harbor to be near her daughter's family. In semi retirement, she drove a dump truck for Island Concrete and Black Family Enterprises.

Camilla couldn't sit still. Since retiring she could be found working at the San Juan Island Library and on the Friends of the Library board. She could also be found having lunch or puzzling at the senior center, playing cards or scrabble at Criminal Coffee, beading at the library or potlucking with PFLAG.

One of her greatest joys was her grandchildren and great grandchildren. Every Saturday she could be found knitting on the sidelines of her grandsons’ baseball or soccer games.

She is survived by her children; Michelle Herko of Friday Harbor and Scott Woodbury of Portland, Oregon and her adopted daughter, Leslie O'Shaughnessy of Bellingham, Washington as well as grandchildren Kai and Nick Herko, Jackson and Berkeley Woodbury, Marcus and Jeremiah Asher, and great grandchildren Wyatt and Kaleb Asher. She also leaves brothers Norm and Marvin Grigg and sister Judy McConnell in Michigan.

She will be dearly missed by her family, and many friends and admirers.

In lieu of flowers please donate to the Friends of the Library in Camilla's name.