"That which we do not bring to consciousness appears in our lives as fate."

People often used to ask me if I was writing down what I called the "German Story." They were fascinated by memories of an era that despite its unprecedented significance in modern times, was fast evaporating from world consciousness. They suggested I document/ film/ record/ interview her before the vividness of her recollections faded.

They said I should not let the lion cub and the Laconia, Kenya, Captain Salmon, Grandpa Julius and Oma Adolphina just vanish even though the characters and the props in my mother's drama had almost all exited the stage before I was born.

Despite the well-intentioned encouragement, I did not make that documentary no matter how many folklorists, anthropology majors, history enthusiasts and kindly listeners tried to make me into a chronicler. The prime reason being is that we daughters spend the better part of a lifetime unwinding from our mothers and purging their voices from our heads. It's a daunting enough task to undock from the mothership without entangling ourselves further by writing their memoirs. 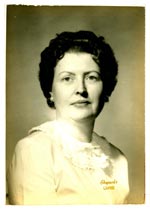 While I recognized that Elsa had developed a great monologue, I had been cringing from hearing it performed ever since I learned my first word in either German or English. My mother couldn't stop giving a dramatic reading of her life as a refugee from Nazi Germany (a period that spanned about 20 years in at least seven countries) and I couldn't stop hearing about it, day in, day out, year in, year out.

The German Story was the center around which all other events and aspects of life revolved and were measured, no matter how disconnected from present experience they might be. If someone mentioned that the cheese on the buffet was delicious, Elsa would remind the group that cheese wasn't available during the war.

If the telephone rang, she would shriek, and then remark that her tendency to startle easily at any sudden noise was a result of the bombs.

Someone even standing in a residential doorway caused her no end alarm and a lecture would follow outlining the dangers of blocking an exit. In the event of a domestic explosion, we would not be able to escape our house/shelter and be burned to a crisp. Arguing that houses don't blow apart without some kind of explosive material involved (dynamite, a leaking gas line, an air attack, some form of accelerant) was futile.

Elsa's default cause for what seemed like melodramatic idiosyncrasies was unassailable. There isn't much that can really trump a war experience in terms of human suffering. That she had also been a child in Berlin during the first World War gave her further standing. During the Great War, her family couldn't buy so much as a pickled herring and had to be satisfied with the backwash of brine left at the bottom of the barrel. This would be poured over a few moldering potatoes to give them ersatz herring flavor.

Trying to squeeze a few dollars for cheerleading camp out of a mother who spent years eating herring brine and dreaming of one day eating a whole herring was impossible.

While Elsa was determined to stand out and draw attention to her life and experience, I was struggling to blend in...unobtrusively. Without a lot of shrieking and fuss.

I resented how nothing could ever just be what it was - the cheese or the telephone - without looping back to scarcity and war and fear. The German Story seemed permanently fixed in my family life and there wasn't going to ever be an American story to supplant it - a story in which coffee was plentiful and we bought our clothes at Penney's instead of cutting apart old garments to sew new garments from the salvaged fabric.

A story where the events and people of the present were allowed to capture our attention and that a story from twenty to sixty years past would begin to mellow and fade.

But I was wrong about that. Time ended the telling after all.

Dementia began to erode Elsa's recall at 93. She stopped telling the German Story and began reliving it. At 95, she was lost in a frightening Gestapo scene where her identification papers were missing and she was being questioned by the polizei.

At 96, her room was on fire and there was a Dutch refugee couple with a little boy living under her bed.

At almost 98, she is looking for her own mother everywhere. She cries out "Meine mutter, meine mutter. Ist sie tot?" My mother, my mother. Is she dead?

She is. Since 1968. We tell Elsa that her mother is fine and visiting her family in Pomerania. It doesn't help. She is inconsolable and I know that I won't be hearing the German Story from her ever again.

But now, against all expectations, I have enough years behind me that I'm starting to look back myself and the course that brought me from beginning to here. And I'm startled to discover that my mothers' journey is not separate from my own no matter how I tried to distance or disentangle. No matter how determined I was to shake the Old World off and live in the here and now, the German Story is symbiotically part of my story as well.

I'm looking more and more like a German frau; I bake apple cakes and was recently pleased when someone offered me a red cabbage from their garden (those were hard to find during the war). The other day I said to myself that I had a "schnupfen" and wished I had a Kleenex in my pocket to catch the drip.

I'd like to have a "geschpusi", but it's hard to imagine how that will come about, exactly, and I know that my mother was far more artful in such matters than I. Coming of age in the cafe and cabaret scene of 1920s Berlin, photographs show her as a thin university student with huge eyes surrounded by beautiful men groomed to Prussian precision. She knew something about getting a geschpusi going.

Yet the biggest surprise has been that in a convoluted way, the German Story has morphed into an ongoing parable about attention and appreciation.

Even though I'm not consumed by the sense of deprivation that caused Elsa to send parcels of toilet paper and packages of coffee to relatives in East Germany (where both were hard to come by) AND to family living in Los Angeles (where, I believe, they have always been widely available), I find that I notice these things anyway.

Every time I use the roll of 3-ply Cottonelle that I buy by the bale, it seems, I marvel at all that snowy excess. I haven't made a pot of organic French Roast for years without pausing to be grateful for this luxury that is so commonplace I can choose to take it for granted, or not.

My legacy from Elsa is the knowledge that the world doesn't owe me my Cottonelle or my Seattle's Best. "It's in my very cells to recognize PLENTY and I know that's a rare gift. Gratitude is the breeding ground for happiness.

So, maybe there are other treasures to be mined from the German Story. Some are charming - Grandma Adolphina had been a stage actress before marrying and was, like Narcissus, besotted with her own beauty. Even into her 80s, she still liked to describe her breasts as being "like bowls of cream with a pink raspberry floating in the middle."

Some are horrifying - gentle and Jewish Grandpa Julius, who is remembered as pouring his tea into his saucer to cool so that the children could sip from it. Julius died in a concentration camp, but not before he was able to smuggle a note to his Christian wife, telling her how much he had always loved her.

Maybe the German Story was always a very good story and maybe I will start telling it myself. Elsa would be pleased.

Editor's note: Elsa died in December, 2012,  four months shy of her 100th birthday. Her memorial was held yesterday, May 11, 2013 at Emmanuel Episcopal Church in Eastsound. It seemed appropriate to rerun Ingrid's column, originally published in 2011,  on   Mother's Day this year.