Concussions or TBIs (traumatic brain injuries) represent an astonishing number of injuries with around 2 million people affected each year. To make matters worse, 75% of these are classified as “mild” which often go unnoticed or worse yet, ignored by the medical practitioners that care for these people.

I remember a classmate of mine who sustained multiple concussions in a single football season only to keep returning to play with no interventions. There seemed to be no support for this athlete who was most likely suffering from the consequences of multiple frequent TBIs.

It is important to note that a concussion does not lead to just short-term effects. Rather, TBIs yield a plethora of down-stream health impacts that can affect an individual for months to years after the injury.

While many are able to fully recover after a single TBI, those who experience a severe TBI or multiple TBIs may sustain chronic complications. The majority of these patients are told to accept their new fate under a false dogma of irreversibility of brain damage.

However, new brain plasticity research is bringing this concept under scrutiny. Through my research, I have come to appreciate multiple inputs that affect brain health and ultimately, the ability for a patient to recover after a TBI.

Throughout the rest of this post, I will briefly touch on the secondary injuries after a TBI in order to highlight the different possible avenues of therapy that can be considered for an individual suffering from post-TBI complications.

Secondary injuries after a TBI are associated with many mental health conditions that seem to be rampant in this day in age. TBIs have been known for some time to create dysregulation of neurotransmitters and messages in neurons within the brain. This can lead to states such as anxiety, depression, and PTSD. This is an interesting finding as some patients accept their mental health condition as status of their own doing or incapability to take care of themselves.

A concussion also has the potential to create gut disorders such as bloating, gas, diarrhea, IBS, etc. This is caused through the internetwork of what we call the “gut-brain axis” by which the brain affects the function of the gut and vice versa. Specifically, after a concussion, the vagus nerve input to the gut can be reduced through a derangement of part of the central nervous system called the corticopontine network. The outcome of this is reduced digestive enzyme production, reduced motility of the gut, as well as reduced blood flow to the gut itself. A downward spiral occurs by which gut dysfunction can lead to increased inflammation and the potential for the triggering of autoimmunity which ultimately leads to further neuroinflammation inside the brain.

Furthermore, brain dysfunction after a TBI can alter blood sugar levels in the body. A fascinating finding is that the brain produces its own insulin, which was originally thought to only be produced by the pancreas. Increased neuron excitability and firing after a TBI will lead to an increased demand for glucose (blood sugar) and has the potential to create blood sugar imbalances and inflammation.

Through sheer force stress, the part of the brain that is the master regulator of multiple hormones (the pituitary gland) can be damaged. Up to 1/3 of TBI patients have been reported to have at least one hormone deficiency as a result. Such hormones include growth hormone, thyroid, and cortisol. These hormones play a role in various body processes such as cholesterol levels, energy production, immune activity, and blood sugar balance.

The final secondary injury I will touch on is the degenerative potential of a concussion. As many of you may know, football players are now observed to be suffering from symptoms similar to dementia. A well-known movie (appropriately named “Concussion”) was made about this topic which I highly recommend you consider watching. This condition is called chronic traumatic encephalopathy or CTE. This is very similar to Alzheimer’s disease as well as other neurodegenerative conditions.

These are just a few of the many complications of TBIs and concussions. My hope is that this information serves to give you insight to possible therapeutic routes for a TBI and give an explanation for symptoms that you or someone you may know is experiencing.

As always, please feel free to connect with me to comment on this piece or ask a question. You can contact me at guardgavin@gmail.com. 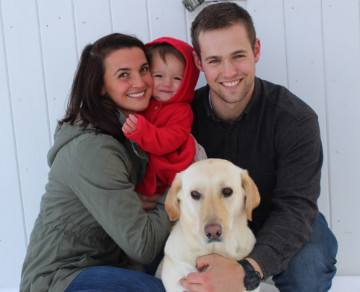 Gavin will soon be graduating from the University of Colorado as a PA. He also is a certified nutritionist and has additional professional functional medicine training. He is the medical director at Roots Health Community which focuses on managing and reversing chronic illnesses through a functional medicine approach. Roots’ mission is to dramatically transform the health of the island community and create a world-class patient experience. If you would like to become a patient at the clinic, you can reach out to Gavin at guardgavin@gmail.com. Roots Health Community will be opening in the fall of 2020.

Gavin, Lindsey and their daughter Ellie will be familiar to most islanders.