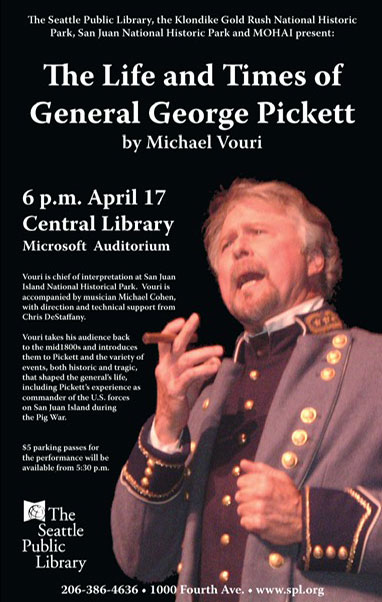 For more than 17 years it was my honor and pleasure to perform on San Juan Island and throughout the region (and once, just once, in Virginia) with Michael Cohen in our play “The Life and Times of General George Pickett.” We played every conceivable venue: library presentation rooms vast and minuscule, community theaters, museums, banquet rooms, private living rooms and even the back room of a barbecue joint. In the latter place our dressing room was alcove, where we worked around a pool table, protected by a tablecloth tacked to the ceiling. The refrigeration unit shuddered loudly every 30 seconds.

The play was a tragicomedy that recalled life in mid-19th century America through the eyes of George E. Pickett, a Virginian who nearly led the United States into war with Great Britain here on San Juan, and then resigned his army commission to side with the Confederacy. No, we did not side or celebrate this decision. Our purpose was to contrast the war that was avoided here with the devastation wrought by the disastrous charge at the Battle of Gettysburg. I rambled through incidents of Pickett’s life interspersed by period folksongs from Mike, which gave the presentation weight, and truly, made it a play rather than an interpretive program.

The songs and format were Mike’s idea, offered during a living history event in the park. Mike, who turned 90 last December, has deep folk roots going back to his group, “The Shanty Boys,” who were part of New York City’s Washington Square folk movement in the 1950s. Mike and his brother, John Cohen of the New Lost City Ramblers, were song catchers extraordinaire, each with hundreds of tunes in their repertoires. 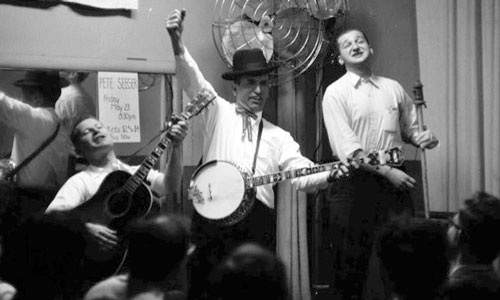 While John continued as a performer, producer, writer and photographer, Mike turned to environmental education, from leasing school bus odysseys to national parks for the Smithsonian to founding his own non-profit foundation that he has operated in the San Juan Islands for decades. He has performed at almost every farmers’ market we’ve ever had here, save for a couple when we were performing somewhere off island.

The play was a mess the first year when we offered it in the San Juan Community Theatre’s Gubulman Room, then a reception area, now a black-box theater. It was three hours long. I was rehearsing “Private Lives” for retired Hollywood director Andrew McLaglen at the time and he and my fellow cast members attended. Andrew laughed and shook his head. “It’s too long, you need to go back to work,” he said.

Susan Campbell-Webster, a wonderful actress, added, “I wanted to kill you darling.” 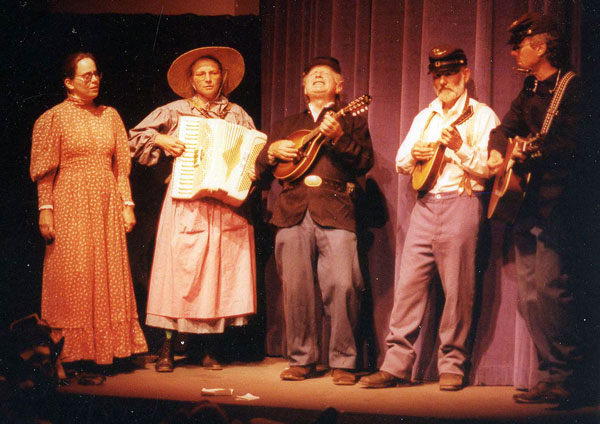 Sugar on the Floor

So Mike and I worked all winter and brought in local playwright and thespian, Chris DeStaffany, to direct and help shape the script. Chris was with us for every performance thereafter until his untimely death. The performance became quite elaborate at our home venue with the pre-show appearance of Mike’s folk group, “Sugar on the Floor,” before curtain. I have never heard a better version “The Wild Rover.”

Well...talk about rambling: Just thought I’d share the photos and this little bit while we are all still alive and kicking. We look forward to the return if the farmer’s market and Mike’s songs with his friends Kirk, Ken, Malcolm, Val, Randy, Jim and Katy when Covid19 crisis ends. Will we ever do the Pickett show again? Who knows? We haven’t been on the boards for nearly five years and it was never really the same without Chris. But I still have the costume and Mike his banjo. Never say never, right?