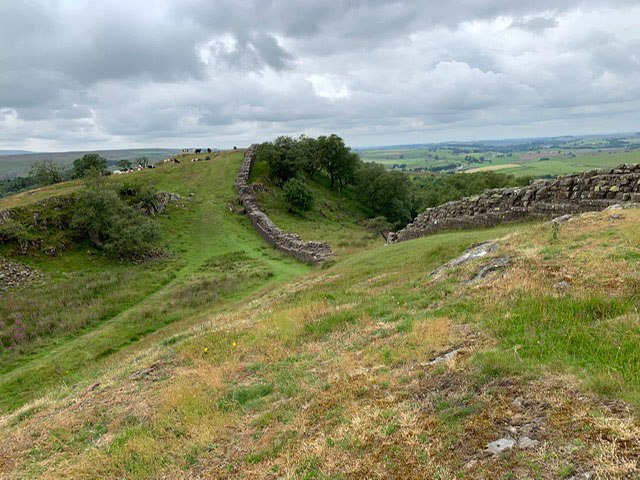 For me, the word “pandemic” was either from my grandfather’s stories or found in history books about events that have faded from living memory.

“Epidemic” was quite another matter, as I still remember standing in line for my polio vaccines in the 1950s and the fear of the HIV outbreak of the 1980s. But as scary as these viruses may have been, they did not infect millions of humans on a worldwide scale over a prolonged period of time.

That’s where the “pan” in pandemic comes into play. Miriam Webster defines it as meaning “everything,” or, even better for our times, “involving all members of a group.”

We are currently bound together in a single, life-changing event whether we choose to accept it or not. It really began to sink in when I read the news about Covid-19 in England. I wondered about the owners of the bed and breakfasts along Hadrian’s Wall, where in 2019 a friend and I spent so much concentrated time on the trail and its environs. I wanted to know how they and their communities were faring, so I wrote each of them. In the process, I shared our own Covid-19 staycation experiences on San Juan Island. 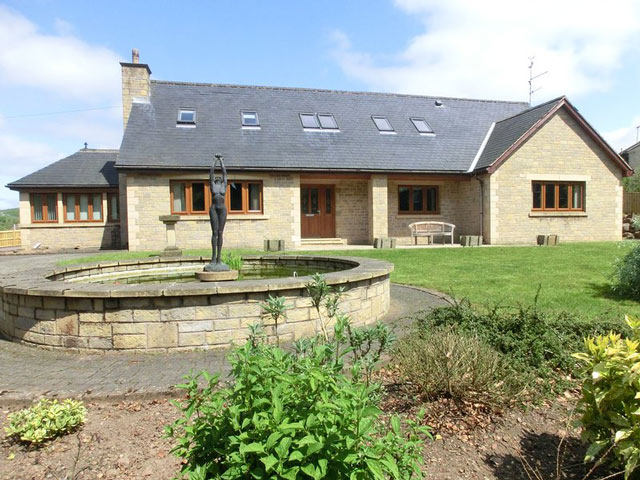 The Hollies on the Wall BNB in Gilsland. Mike Vouri photos

They had all been gracious hosts, though none more so than Jackie McLennan. She owns the Hollies on the Wall in Gilsland, a village of 400 souls straddling the counties of Cumbria and Northumbria on the wall path. Her generosity and cheerfulness was immediately apparent to a couple of weary hikers. 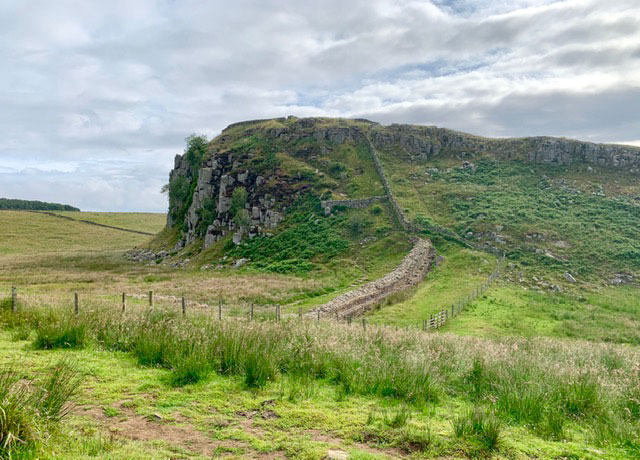 The hiking is spirited between Once Brewed and Gilsland, as the topography has been shaped by the continental icesheet.

To reach Gilsland from the east involves eight miles of arduous hiking along a corrugated ridge one writer called the “Nine Nicks of Thirlwall.” A nick is a local word for a gap, or spillway, gouged by the continental ice sheet. You ascend a flagstone path that accompanies the wall to the top of a hill, carefully pick your way down more flagstones, pass through the nick and climb the next hill. Over and over. Imagine hiking “Heart Attack Hill” (a nickname given to a similar glacial leftover in San Juan’s Jakle’s Lagoon trail network) repeatedly over six hours.

We got lost trying to find “The Hollies.” Arriving in a village after a long day’s hike is one thing. Finding your way around is another. Gilsland is on a hillside, and the streets do not offer the logic of a grid. We gave up and called Jackie, who jumped in her car and brought us home for the night. Once we were settled her husband, George, said, “You’re all right!”

He did take us aback when we invited him to join us for a pint at The Samson. “I’d love to, boys, but we are going into Corbridge for dinner tonight.” Corbridge? “Yes, Corbridge. It’s about a half an hour away on the A69.”

Half hour? I thought about our three days on the trail from Corbridge, including the bogs, hay fever, unmarked trails and plantar fasciitis. I guffawed, to his puzzlement. “It’s a long story,” I explained. “Well, you’re all right, then,” he replied.

The following morning, Jackie, wanting to ensure we did not waste anymore steps, leashed her young black lab and escorted us to the trail. Delighted with our stay, we assured her we’d be back. But Covid-19 nixed any plans.

As we now know, the government shut down the country as the virus spread. In an instant, all of Jackie’s spring and early summer bookings melted away. Trying to keep her business going became a challenge for her and for bed-and-breakfast owners around the world. It was further complicated when she and her entire family tested positive for the virus.

“My husband was first, and then I started being poorly,” Jackie wrote shortly after New Year’s. “We just thought we must have picked up a bug, but then our son became poorly on Christmas morning.” Both her sons were tested, and the results came back positive 24 hours later. Her husband followed.

As of this writing, there are 4.07 million cases and 119,000 deaths from Covid-19 in the United Kingdom. The number has escalated as variants of the virus popped up throughout Britain. Cumbria and Northumberland were especially hard hit, with an average of one in 19 and 20 respectively per capita infected. By contrast, San Juan County has registered a mere four in 100,000 per capita. Still too many, but we are lucky to live here.

Jackie’s bed and breakfast and others we visited along the trail—including the Vallum Lodge Guest House and Hall Barns, eight and 17.9 miles away respectively—reopened on July 4 at two-thirds occupancy. With Britons (like Americans) thirsting for getaways, domestic travel in England surged, and most of Hadrian’s Wall lodging was booked through October. But just as in the United States, the relaxation of social distancing rules precipitated a torrent of new cases, and the government once again enacted lockdown protocols in November. 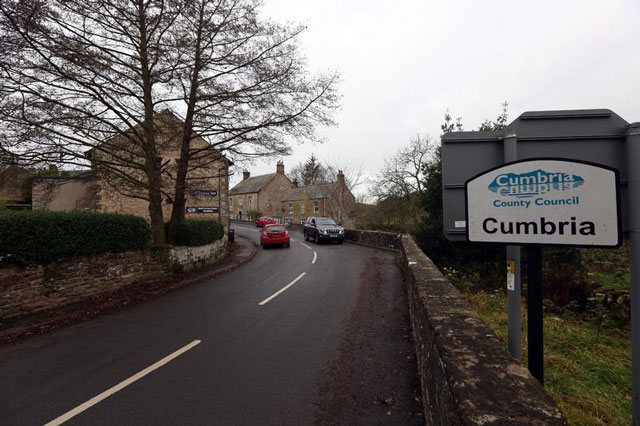 The village of Gilsland is split down the middle between Northumberland and Cumbria, which means there are different sets of social distancing rules depending on where you live in town.

Pubs and restaurants are currently closed to indoor dining. This has wrought hardship on the grand old English tradition of the daily pint with friends at pubs such as Gilsland’s “The Samson,” where we enjoyed a meal and a brew during our stay with Jackie. The pub is closed now because it is located on the Northumbrian side the village. If you want a pint you have to drive 20 miles to Carlisle in Cumbria, which allows limited indoor dining and quaffing. Northumbria does not.

While hotels and bed and breakfasts remain open for essential travelers, all three places we stayed remain closed. Jackie says that the economic sting has been eased by government grants and a few commercial guests, but none expect to reopen before April.

“Our area has been hit quite badly considering we had no cases first time round,” wrote Jackie. “I was too poorly to go out so I have done a postal test. I have never been so poorly, have lost a lot of weight and am taking it easy.”

So is Samantha, the owner of the Vallum Lodge, who had launched us on our way to Jackie in 2019 with a hearty breakfast and a sack lunch. She reports that the Northumberland National Park rangers along the wall are “…doing a sterling job of keeping tourists away and reminding them of the need to stay home until we have the pandemic under control.” Meanwhile she has been applying her energy to doing shopping for the elderly and vulnerable residents in the nearby village of Haltwhistle.

She has high hopes for a return to normalcy. Soon?

“I am keeping fingers crossed that once I am allowed to reopen, I will have a more normal season and will get to welcome lots of weary walkers here again!” she wrote. “At the moment bookings from May onwards are looking good. I hope nothing happens to force any further cancellations.” 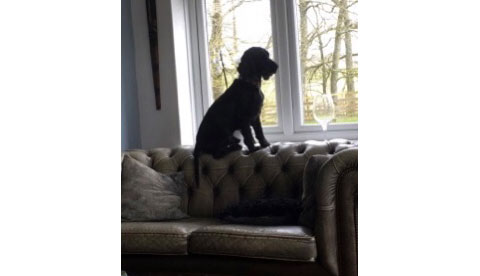 Branston wonders where all his guests have gone at the Vallum Lodge in Once Brewed, Northumberland.

If he could speak, her cocker spaniel, Branston, would agree.

“Branston does not understand where all his friends have gone, and spends hours looking out the window in the hope of seeing someone he can run out and greet!” Samantha said.

Hopefully that will come sooner than later, according to Jackie.

“Thankfully the vaccine has started to roll out to the elderly and National Health Service staff, and the Oxford vaccine will hopefully be available soon too,” she wrote. “We all have to stay safe, stay at home and look after each other as best we can!”

As we are doing here.

As we are doing all over the world.

Keep calm and carry on.

Mike Vouri is a retired national park ranger and historian. He is the author of The Pig War: Standoff at Griffin Bay and four other histories about San Juan Island and the Pacific Northwest.