Thoughts on doing the celebrity walk through the Basilica of Santa Croce (completed 1442) on a rainy morning in Florence:

You know you’ve arrived when you’re dead, but you’ll never know of course unless it has been planned ahead of time. Michelangelo expired in Rome, worn out by his exertions in the Sistine Chapel, and the badgering of the Pope no doubt, but a hundred years later his corpse was shipped to his home town, Florence, where it was tenderly laid to rest—“unputrified” according to legend—in a splendid box fashioned from porphyry marble, flanked by sorrowing nymphs and a bust of his head and shoulders. 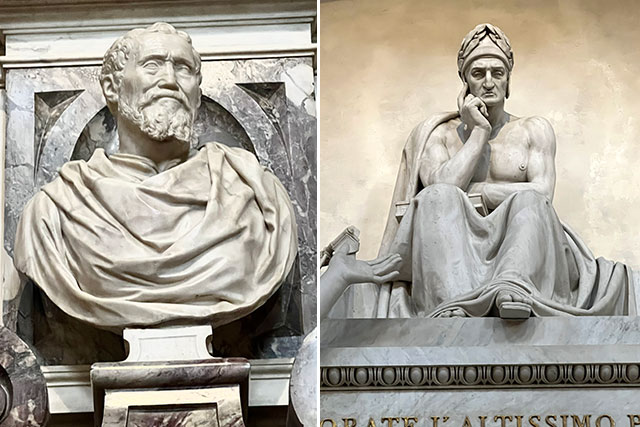 I studied the face of the bust and it suddenly dawned on me that the lips seemed to be directing a vulgar noise across the vast nave of the basilica. Who? What? I crossed the twin rows of pillars and discovered a simple bronze plaque covering a funiary niche in the wall. Enscribed on the niche: “Leonardo Da Vinci.” The great Renaissance man of Florence had been simply stuffed into the wall. No angels, no weeping nymphs. Not even an epitaph. Just a name. But what a name. 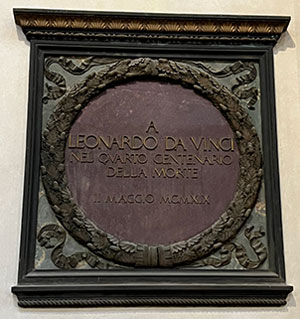 Still, unless you were one of the many knights lodged under the floors, or the clerics in perpetual prayer above their stone boxes, you had to have achieved something to find your way into eternity in a basilica or cathedral. Galileo is also in Santa Croce, despite the fact that he had been declared a heretic and was forced to decant, which lends a hypocritical taint to the whole business. Marconi is there as well, and Rossini and Machiavelli and Donatello, geniuses all. But the most affecting to my mind is Dante, who not only glares from his spot on the wall, but also from his towering statue on the basilica steps. 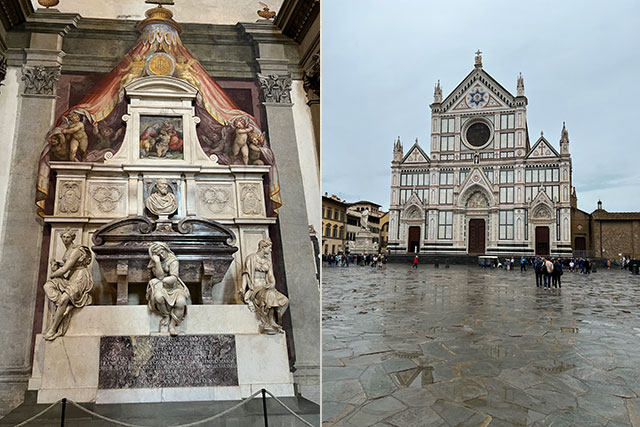 Oh…the folly of man. Which brings to mind a quotation from Sir Richard Burton (the 19th Century explorer, not the Welsh actor, twice husband to Elizabeth Taylor): “The more I study religion,” he wrote, “the more I am convinced that man never worshiped anyone but himself.”

Hmm. Of course almost all churches, big and small, entomb our hero’s. Westminster Abbey celebrates kings, queens and poets, though not Jim Morrison of The Doors. You have to go to Paris to find his stone at the Pere Lachaise cemetery.

My favorite church celebrity moment, however, can be found in the abbey at Bath, England. There they have a memorial plaque dedicated to Sir Isaac Pitman, the Bath native who invented shorthand… 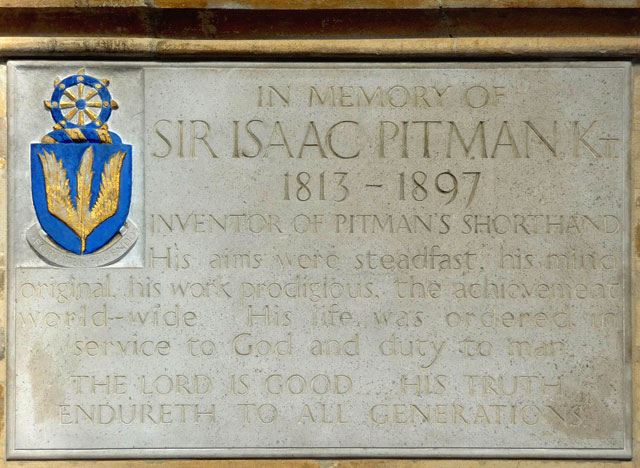 Another valuable contribution to the works of humankind and no doubt a lost art.