It started far from the ocean in Park City, Utah, site of the 2018 Future in Review Conference. It was the last day and I was on a panel moderated by Ocean Alliance founder and world-famous whale expert, Dr. Roger Payne, with world-famous anti-whaling hero, Paul Gouin, and a soon-to-be world-famous brilliant professor and scientist, David Gruber. The room was full of brainiacs from science and technology and although I had been thoroughly informed and inspired by their brilliance and vision, I was the fish-out-of-water fighting for a small population of mammals facing extinction in the Salish Sea. I am not in the least bit scientific. Occasionally, I have a streak of common sense. 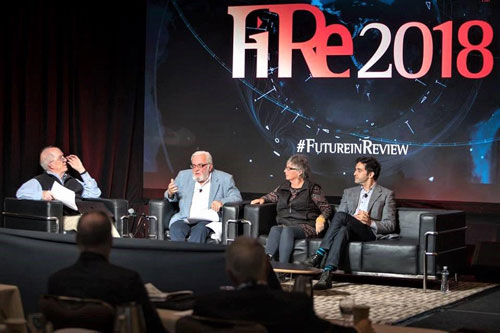 In the midst of his extraordinary update on the international state of affairs regarding whale-harvesting, Paul Gouin stopped in mid-sentence and started to weep. All of us on the stage were stunned. So was everyone in the audience. FiRe is a brilliant event of global mind and accomplishment. Tears were not on the agenda.

Days earlier, in his opening remarks, Mark Anderson spoke to the sadness-at-large regarding the world-at-large. He then went on to speak to the conference’s historical accomplishment of raising spirits and inspiring a better world through science and technology. Now, Paul Gouin was unable to speak through his weeping and everyone else in the room was holding their breath. 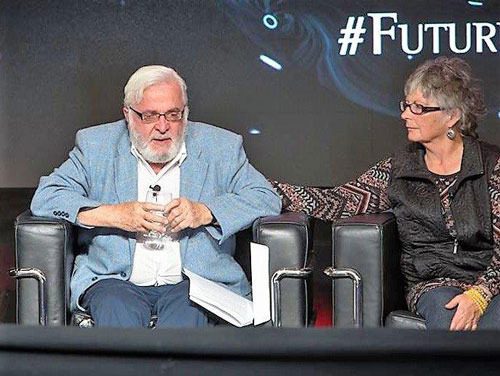 I put a hand on his back and called for water. He was quickly attended to—and still unable to continue. I was suddenly on deck to speak and everything I had memorized re: SRKW status and statistics dropped right out of my head. My heart took over. I spoke to the brilliance and perseverance of Paul Gouin’s lifelong commitment to stop global whaling. To the best of my ability I honored this man who had dedicated much of his 76 years to fighting whaling around the world. His success was extraordinary—but there were still whales being harvested. His tears were for them.

Grief—that much-maligned and embarrassing state-of-affairs in the world of male supremacy—is a “no-no.” But I am personally experienced with the “yes-yes” nature of grief—the way it heals and opens the heart; the way it nurtures stamina and action; the way it holds us so reverently when we cannot hold ourselves. Paul Gouin was expressing the very foundation of what has fueled his astounding activism and stunning success in saving whales around the world. It is the whales not yet saved that break his heart—and strengthen his stamina.

My respect and admiration and appreciation for Paul Gouin went from a mind-set to a heart-soaring experience. Because I could relate. All my preparation for my presentation had been based on facts without feeling. And here I was, wallowing out-loud in the power of grief to change the world. I couldn’t have been happier.

Within days of being up to my knees in snow and my eye-balls in grief, I attended the Governor’s SRKW Task Force meeting in Tacoma. As in their past meetings, the stakeholders around the table came first—and most of it had to do with money. The only stakeholder missing was a representative from the SRKW population. This task force, tasked with emergency action to save the Southern Residents’ from extinction, shed not a tear. Instead, they bickered about details down the line that would only matter if the SRKWs survived down the line. Which they won’t. Their diminishing numbers and their reproduction statistics spell: i-m-m-i-n-e-n-t e-x-t-i-n-c-t-i-o-n.

My own tears were close to the surface when I spoke about how echo-location speaks to the entirety of the SRKWs existence—from where the food is to where the family is. From feeling alive to being alive. From navigating to knowing. And how the noise we inflict upon them in the name of “love” is destroying them. I left Tacoma with a heavy heart. Witnessing the lack of scientifically-based decision-making and the overload of special-interest mollifying was truly a tragedy that reflected the all-too-tragic nature of these times.

At the end of October, I succumbed to Film Festival euphoria and saw films that both broke my heart and uplifted my hope. “Chasing the Thunder” was a thriller of a documentary that illuminated the far-reaching impact of Sea Shepherd around the world. The young ship pilots featured were a beacon of hope for the future. And Paul Watson, who received a “Lifetime Achievement Award” became (to me) a spiritual guru when he spoke about how the earth would make a comeback only a few million years after we destroy her. He also said that the crews on Sea Shepherd ships did not eat fish. They are fed a vegan diet. And “Sea Shepherd does not “raise money.” They do their work first—and get support for doing their work.

On Sunday evening, after the film, “Chasing the Thunder,” received the audience-favorite award, Paul Watson spoke to San Juan Islander Editor Sharon Kivisto. She asked him if he had any suggestions for dealing with whale-watching and its impacts on the Southern Resident Killer Whale population. He noted whale-watching was tricky. It’s allowed in Norway as a tradeoff to end the killing of whales. As for the San Juan Islands, he said it needs to be regulated. “If I had my way, I’d just allow kayaks and sailing boats,” he said.

Making noise can be deadly. It can also be a distraction. Blabbering on and on about taking down dams and restoring salmon stocks is essential—and a deadly distraction. It camouflages the emergency at-hand. It relegates the crisis to something negotiable. Yes! Of course, we need to restore salmon and remove some dams. In the meantime, why aren’t we doing something that will be of immediate help to the struggling Southern Residents—like an effective Whale Protection Zone? If we give them back their home in time, we might have a chance in hell of saving our own.

The other winner at the festival was, “The Hundred-Year Old Whale.” It was about Granny, the matriarch of the Southern Residents who died in 2016. More recently the world was riveted by the death of a Southern Resident orca calf and the grief of the mother, J35. My own cynical mind wondered why we were seeing a picture of an hour-old calf? It implied noise and disturbance by those sighting the Southern Residents as well as by the photographer. How do we know it wasn’t that disturbance that destroyed the critical echo-location abilities of both mother and calf? Yet it is an image that brought the world to its knees—in grief. Now, if only it could have a similar impact on the Governor’s Task Force as they make their recommendations on behalf of saving the SRKWs from extinction.

May grief be with us.