It’s Thanksgiving week. It is the week that, in 1999, forever changed my life. My son, Colin, and I went to Ballard for our traditional Thanksgiving dinner with friends. On the way to their home we stopped at a small store to pick-up a few goodies. I mentioned to Colin that I might be coming back down to go to the WTO demonstrations the following week. The elderly Asian man who was behind the counter overheard me. His face broke into beam of joy, “You go, you go!” he pronounced with a big grin. Then he said, “You wait here.” And he dashed into the back room and came back with a big green sticker for the car that read: “If it doesn’t work for working families, it doesn’t work.”

About a month earlier I’d attended a Global Economic Justice conference during which economist David Korten had urged us all to show up for World Trade Organization (WTO) demonstrations in Seattle. But it was the excitement of this elderly Asian man’s encouragement that immediately sealed my fate—a life-changing experience and the resulting book, “The Battle in Seattle.” 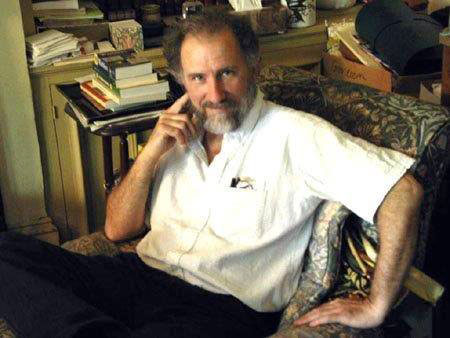 Islander Ben White was a big part of it too. Many islanders remember Ben—the heroic environmental activist and erudite arborist who knew it all, as well as how to illustrate it all. He was my neighbor and I was witness to the carloads of cardboard that he rescued from recycling and brought home to transform into turtle costumes—with the help of his designer/artist/activist friend, Bryn Barnard. 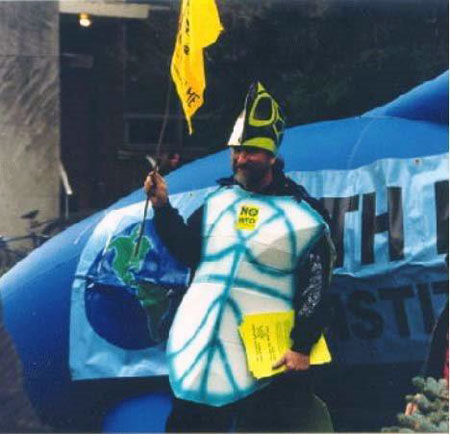 Ben’s activism was from both the inside out and the outside in. The turtles roamed the streets capturing attention around the world—there is now one in the Smithsonian. Ben’s death at the age of 54 in 2005 was a deep loss for the future as well as a personal loss for so many. https://en.wikipedia.org/wiki/Ben_White_(environmentalist)

Ben White put the turtles on the streets of WTO in 1999 but was first inspired into his animal activism through an encounter with dolphins off the Kona coast in Hawaii in 1971. He swam out to see them.

“I was surprised at how big they were,” Ben said. “One of them hit me with its sonar. It was an amazing feeling throughout my whole body. Then it turned sideways and looked at me. It regarded me. It shattered my world view. I realized what a deadly, mean business captivity is. And I made a vow. I swore that I would do everything I could to be their voice in the world of humankind.”

Being on the streets of WTO Seattle was a global experience. There were farmers, teachers, environmentalists, policy-makers, union-workers, activists of all kinds, and regular folk from all over the world walking for basic human rights in an increasingly corporatized world. I learned how everything from my morning cup of coffee to the clothes on my back were destroying the lives of everyone from cotton farmers in India to coffee farmers in South America. When the farming of land gets corporatized, food for families comes last. Thousands of farmers in India have committed suicide because they could no longer grow food for their families. This capitalist catastrophe has continued to unfold throughout the world—destroying the fabric of life—literally and figuratively for those who represent the most authentic form of life: life that knows and grows through interdependence.

“Capitalism destroyed communism and now it’s destroying democracy,” is a phrase I heard during WTO week. But it was presence, not slogans, that changed my life forever. Being on the streets with so many thousands of “regular” people from all over the world, hearing the heartfelt speeches of humanity pleading for economic justice, witnessing the suffering that resulted from globalized capitalism—it all reverberated throughout my body, mind and spirit. Even though I’d been activated by the Vietnam War by being an army wife at Fort Dix NJ where volunteering in the hospital woke me up—and kept me awake—to the crime of war, I had not yet faced the enemy that is us. Pretty much everything we take for granted in our lives is riding on the backs of others.

N30, 1999, became symbolic with Thanks giving—and Giving-Thanks to those all around the world who are waking up—and staying awake—to the global injustice perpetrated by corporate exploitation of people and planet. It is not easy to stay awake to suffering. And it is critical if we are to save ourselves from extinction.

Here, in our home waters, where we are exploiting the Southern Residents orcas into extinction even as we hold ourselves up as their saviors, the darkest shadow of all looms over our horizon. Capitalistic consciousness is unconscious of the needs of all others—be they plant, animal or people. That is the only way it can survive. Truly giving thanks, to one another and to this sustaining planet, means coming out from behind the veil, and up from under the heavy heel, of capitalism. It means dropping the veil of independent identity and coming together in celebration of life as interdependence with all there is. Life is, after all, everything.