Facebook reminded me that my last year’s resolution was to “lighten up.” I’d just finished a year with Orca Relief Citizens’ Alliance and was shaken to the core by how working for the survival of our Southern Resident neighbors could arouse such vitriol in our community. 2017 was the year that opened my eyes to orca non-profit organizations that did not ultimately profit the whales but did put profit into pocketbooks. It was not a deception I was prepared for and I had a very heavy heart by New Year’s 2018. “Lightening up” seemed the best thing to do if I was to continue.

If anything, 2018 took me further down the rabbit-hole of exploitation in the name of the SRKWs. I have appreciated the appreciation for Orca Relief Citizens’ Alliance that has been expressed to me privately. But the lack of support that has been expressed publicly has me astounded. Mark Anderson, who founded Orca Relief more than 20 years ago, saw their extinction pending on the horizon. To him it was simple: Let’s protect their core critical habitat with a Whale Protection Zone so they can access the food and safety of their home waters. Unfortunately, their core critical habitat just happened to be where everything from invasive research to invasive whale-watching took place. Not even imminent extinction could impact the exploitation-at-large.

So here it is, the beginning of 2019 and I need to “lighten up” more than ever. And I’m trying. My first post on the Orca Relief Facebook page was simple: “All of us at Orca Relief are deeply grateful to Governor Inslee and the SRKW Task Force for their strong commitment to saving our Southern Resident orca neighbors from extinction. The SRKWs need food--and they need us out of the way, so they can access their food. It's time for us to stay on shore, stop exploiting them, and give them back their rightful home. Thank you to all who are doing the right thing. Please share--so the Governor & the Task Force get as much gratitude as possible!”

The first response to this post was, “Fuck off you ignorant fools.”

Okay. And am left wondering where, precisely, should I “fuck off” to?

All of us who live in these islands share one body—of water—and there is nothing simple about it. The Salish Sea laps at our shores inside and out and we live here because we love it—even when we don’t. And when we leave, even when we love leaving, we can hardly wait to get back.

A recent weekend away plunged me into the complexities of island-life-at-large—both here at home and “abroad.” It started on a Friday with a drive through early-evening Seattle in a pelting rain and hail storm that turned stop-and-go traffic into stay-stopped-and-don’t-go-anywhere for too long at once. When I did finally get to where I was going, I was stunned to still be alive—and even more stunned that my rental car was still pristine. I was also pissed at myself for not figuring out how to use the CD player ahead of time, so I could play my I-5 survival songs. My one attempt to do so while driving on I-5 was quickly aborted by my survival instinct. The same instinct that makes sure I take the Bella Luna Social Club’s “Blues Night—Live from Friday Harbor” on every foray off-island. 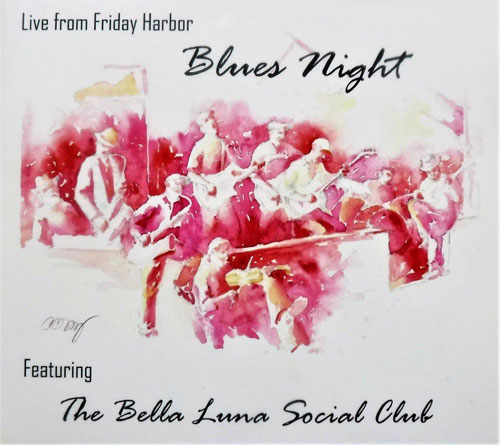 It was in 2008 when the Mayor of Friday Harbor, the late David Jones, insisted this CD be produced. He loved the Blues and he got our local blues musicians to play their favorites songs and tunes and record a CD. Although I’d seen him at Blues Night at the Rumor Mill over the years, I did not know about the CD until David’s memorial service where it was distributed to his many friends and admirers.

The service itself was a poignant look-back down the memory lane of David’s life. West Davis, retired pastor from Saint David’s Episcopal Church, conducted it with his usual passion for and devotion to those he loved in his congregation—which was everybody. Mayor David Jones, however, was special and West’s love and appreciation brought us to our knees (figuratively speaking as we were at the Yacht Club for island-style reasons that are too complicated to go into here).

I first met Mayor David Jones at St. David’s Episcopal Church. It was during a casual coffee-hour church-chat with him, when I discovered that he’d been a captain of a nuclear submarine. I was momentarily speechless. Then I blurted out that I’d been protesting with Japanese Buddhist monks and S’Klallam tribal members as the first nuclear submarine traveled through Hood Canal to the Bangor Submarine Base in Bremerton. It was 1982 and we were camped out on S’Klallam land, watching in silent prayer as the sub approached through the fog.

My stint as an army wife at Fort Dix, NJ during the Vietnam War had well-educated me about what combat does to young men—many of whom return home in pieces. That’s when I became an anti-war activist and it had a ripple effect that encompassed everything from one-on-one combat to nuclear submarines of mass destruction.

My church-basement chat with David that morning stopped us both in our tracks. Then we grinned. I thought to myself, “Thank God it is men like David Jones who become commanders of nuclear submarines.” I have no idea what he thought but there was new warmth in our smiles towards one another from then on. It felt like we shared a secret about something about which nothing could be said.

We lost David Jones in 2018 and others whom we love—including Sam Connery, whose paintings are on display at SJIMA, along with those of MaryAnn Rock, who was a very special friend of mine many years ago. Just as their art brings them back to life, the “Bella Luna Blues Club"  CD brings David Jones back to life—precisely because that music brings me back to life when I need it the most.

So, in response to “Fuck off you ignorant fools,” I put on that CD—and wept. Because musician, Steve Keys, who is a big part of that CD, lost his beloved son, Chris, shortly before Christmas. How could I feel better listening to Steve play and sing when he and his wife, Louisa, my dear friend, were deep in grief about the loss of their son?

I lost an infant son when I was at Fort Dix, NJ during the Vietnam War. It was a loss that motivated me to volunteer at Walton Army Hospital, which helped me survive my grief—and turned me into an anti-war activist brat. Those wounded young men came back with all the grief of time in their eyes, hearts and souls. I took to the streets in honor of their loss—and my own.

If our grief does not shape who we become, it is the greatest loss of all.

So, yes, once again, I need to lighten up. Because doing so keeps me going. But it is my grief that gives me all the reasons why it is so important to keep on going.

And it is “Blues Night” from Friday Harbor, with the “Bella Luna Social Club,” that has become my destination of choice when the going gets tough—even when it gets tragic.

As British writer and literary critic, Cyril Connolley, wrote: “I believe in Two-Faced Truth—the Either, the Or and the Holy Both.”

May our grief be with us. And our joy, too.

May the SRKWs survive and may we survive with them—throughout 2019 and beyond.