I had to go to India to meet Jeff Asher. I was at Deer Park Institute in northern India when another islander, Kurt Schwalbe, showed up to teach the Heart Sutra—with Jeff Asher in tow. Kurt, who is a Tibetan scholar and a Unitarian minister as well as a commercial diver, got me to Deer Park to begin with and I will be forever grateful. Ten years of visiting India has taught me a landslide of heart/mind lessons that I needed to learn. 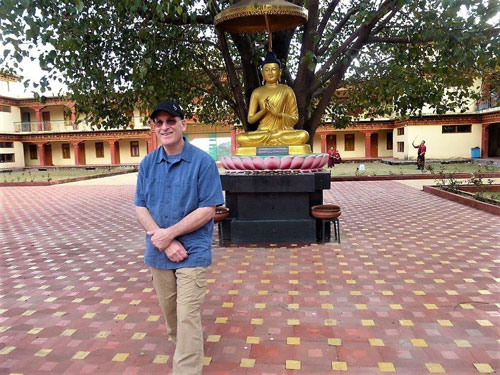 Jeff immediately fit right in at Deer Park Institute. He engaged naturally and open-heartedly with the staff, the guests, the villagers and the surroundings. I took him on a tour of the back alleys of Bir and he loved it all as much as I did. Once again, India was teaching me to get over the habit of “first impressions,” which often turn out to be lasting misconceptions.

Over the next few years, I learned more and more about Jeff—including that he is a dad to two sons, knows how to build and fix everything, and runs his family’s waterfront retreat. He headed up the Sheriff’s Dive Team for years and is also an EMS provider. At the same time, I learned very little about the inner workings of his life in the Sheriff’s Department. He was a detective for seven years—which means silence about it all.

As I grew to know his integrity, passion for justice, compassion for people, and his extensive experience in law enforcement, my respect for Jeff grew immensely. Thirty-four years serving San Juan County with vigilance, dedication and discretion. I did learn that we live in a complicated county. With so many miles of international-boundary shoreline, law-enforcement breaks all the boundaries of our limited perspectives as residents. Nothing is as it appears to be. Nor is it otherwise.

I was happy when Jeff decided to run for Sheriff.

He ran because he wanted to bring his 34 years of experience into full fruition on behalf of all county residents. Only problem was, even though he had run for Sheriff before, he didn’t like to “run” for office. “I’m just not a politician,” he would say to those of us helping his campaign. All of us knew that was precisely why he would make a good sheriff—but, unfortunately none of us could run for him. And his reticence to “run,” which in no way reflected the depth of his ability to serve the county, did not serve him well in his campaign. And he absolutely refused to run any kind of negative campaign.

There were specific issues and circumstances that spoke for themselves regarding a need for change, but Jeff firmly refused to speak about them. In an article he wrote announcing his campaign in the Journal of the San Juan Islands, he wrote respectfully and appreciatively of the four sheriffs he had worked with: “As I worked with each sheriff, I paid attention to their strengths and weaknesses. I saw what works and what doesn’t. I observed, listened and learned.”

So, after running discreetly and honestly for an office he fervently desired, and then losing, Jeff decided to retire. He had become persona-non-grata in the very place he had worked for 34 years. All because he wanted to be sheriff before his long-standing and long-experienced career was over. There is no “good-bye” party being organized to honor his many years of dedication and service. Too bad he didn’t work for a bank.

It is not easy to work for others on an island for 34 years and receive not a heartbeat of appreciation from those you work for—which is all of us. So, just to embarrass the hell out of Jeff, when you see him, give him a hug, a pat on the back, or a thumbs up. He’s been a most compassionate and effective police officer in too many ways to count. He deserves to be embarrassed.

And he’s not alone.

There are a lot of behind-the-scenes workers in our county. They work with integrity and they protect the privacy of others. They are therapists, teachers, emergency services personnel, doctors, nurses, pharmacists, social workers, food bank volunteers, attorneys, police officers—and others. Just because they are cheerful, smiling and seemingly unperturbed, it doesn’t mean they are not carrying the weight of what they know. They all deserve our unending gratitude, our respect, and our appreciation.

None of us are who we appear to be, nor are we otherwise.