I write this at Deer Park Institute (www.deerpark.in) in Bir, Himachal Pradesh in the foothills of the Himalayas. It is my tenth anniversary of coming to Deer Park where I facilitate writing workshops for participants who come from throughout India as well as the rest of the world.

We just finished three workshops: Memoir and Meaning; Nature, Nurture and the Writing Body; and Travel Writing--On the Road and Off. Throughout them all we attempt to control the writing “mind” and let the heart, soul, body and spirit write themselves onto the page.

This year, most of the participants are from India. They all speak fluent English, as well as the language of their childhood—which could be any one of more than a hundred languages. And they all speak Hindi too. This language accomplishment always amazes me. 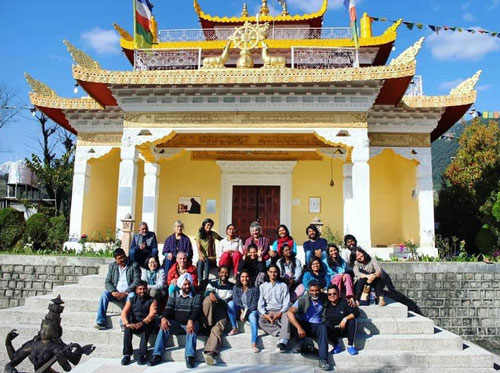 One thing I have learned is to invite participants to write in their original language because it can always be translated into English. In memoir particularly, memory is often more accessible and meaningful when recalled on the page in one’s first language. People share their work aloud in their language of choice, followed by their English translation. As a listener, although I do not understand Hindi or any other of the many languages spoken here, I can feel the rhythm of the words and hear the intonation of emotion. And when the English translation is offered, it usually confirms the emotional weight I have heard being expressed.

When we speak, what we “know” is often born out of what we think which is usually born out of what we’ve been taught. This is where the writing body gets to have a voice of its own. Writing in present-tense about our actual experiences—from childhood up to yesterday—can open the path into memory with unique and unfettered accuracy. It flies in the face of “mind” and its meanderings. It lays claim to truth that can be neither challenged nor confirmed. It simply “is.” Sharing the deeper truth of our experiences through writing encompasses our humanity in ways far beyond the color of our skin and the language and norms of our culture.

As usual in these workshops, I learn far more than I could ever teach.

The hi-tech professionals in the workshops remind me of the critical importance of experiencing real-life as well as online pretend life. The writers in the room bring back the values of introspection, intimacy through the written word, and the universal nature of human life. A Punjabi man who is a retired English Literature professor, regales us with quotes from the East/West classics that speak to both spirit and writing. The young people with their unbounded intelligence, spiritual wisdom, and lack of interest in materialism, bring bright hope into the room.

One young woman in the travel-writing workshop wrote about her heartbreak at the changes in Bir over recent years because of the para-gliding tourism industry. Over and over she wished she hadn’t known about “how it was before.” Her writing about the damage to the environment and the loss of community and culture set the stage for a collective writing journey into grief. That evening we added a spontaneous “open-mic” sharing to our time together. The grief we’d shared throughout the day paved the way for joy and love and celebration to enter the room. The full circle of it all sent me to bed happy—and sad. 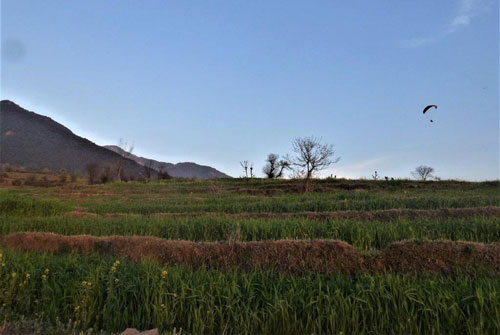 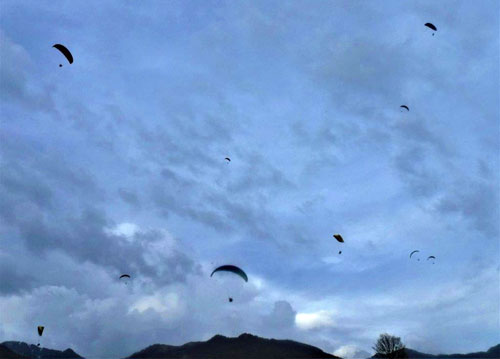 Parking at the landing field

Here in Bir, tourism via paragliding is well on its way to destroying the environment. It has overtaken both the village and the countryside. Instead of tribal farmers lining the narrow street with their fresh fruit and vegetables, there are endless taxis. The slow and peaceful stroll-about is now a highly vigilant, taxi-dodging affair that leaves no time for greeting the shop-owners along the way. 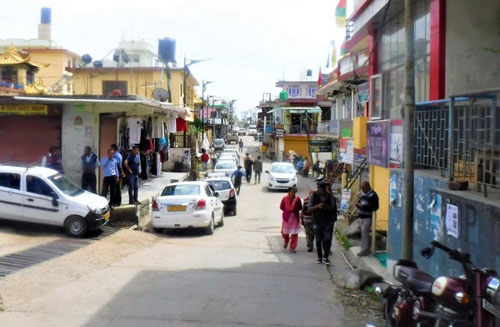 No longer are there famers and craftspeople along the edges of the village road through Bir. No longer are the SRKWs basking in their home waters for hours and days. The noise and disturbance and violation of space has chased away the farmers here and the Southern Residents there.

Here in Bir, there is talk of an electric bus that would bring in tourists from the intersection at the edge of town. But nothing is going to stop the construction that is destroying stone cottages, tea fields, surrounding land and bucolic views.

“No matter where you go, there you are,” is a mantra in the travel-writing workshop. As I am at home in the foothills of the Himalayas, I am also at home along the shores of the Salish Sea. As the grief of these times becomes manifest in the young people around the world, I am made fully aware of how we are destroying their future as well as the future of this miraculous planet we call home.

Living in the San Juan Islands is living within the island-bound beauty of it all. Until it isn’t. Being in the village of Bir in the foothills of the Himalayas is living within the mountain-bound beauty of it all. Until it isn’t. From high in these hills, I mourn it all—the pending loss of the SRKWs to extinction and the loss of the landscape and its historical tribal culture—all to the short-sighted exploitation of profit-focused tourism.

One of the workshop participants shared this: https://stethelburgas.org/climate-justice-and-the-living-earth-by-llewellyn-vaughan-lee/

Here is its final paragraph:

“The Earth will continue. We are now living through the sixth mass extinction of species in Her history. It is our shared future that is uncertain: whether we will keep to our ancient promise to witness Her wonder and beauty, honor Her sacred ways; or whether we will continue our present path, stumbling through an increasingly soulless wasteland, caught in consumerism, until the sea levels rise, the air becomes too toxic, the oceans too acidic, our souls too desolate. Again, in the words of the young activist Greta Thunberg, “We have run out of excuses and we are running out of time.” But she also said, “Change is coming.” The real question is whether we are open to be a part of real change—for hearts and hands to help the Earth, for our souls to reconnect with the magic and mystery of Her living being.”