I was in bed too much this past week—trying to shake the coughing crap that is going around. Too much time to reflect, too.

My first job on San Juan Island was as County Fair Coordinator. It was the early 90s and it was a part-time job. I met great people from all over the county—including the nuns from Shaw Island who ran the Sheep Barn, and all the county musicians, many of them professional and all of them talented, who came out of hiding to perform. The all-islands local involvement was inspiring and heartening. At some point the job morphed into including the role of San Juan County Parks Superintendent—but it remained a part-time job. One day, in the summer of 1995, I got a call from the manager of San Juan County Park on the west side of San Juan Island asking if a business could launch whale-watching Jet-ski tours from the park. It was a no-brainer to say “no.” Then I checked my job description and was gratified to see that I was to “protect the park and its users.”

The Jet-ski industry immediately sued the county and I got deposed a couple of times by a panel of fancy corporate attorneys. Luckily, I knew enough to say “yes” and “no” without going into the quicksand of either defending myself or complicating the issues. I never did get called to testify. I considered it a compliment. It would take a book to document the unfolding process. Enough to say that three years later, on July 9, 1998, the Washington State Supreme Court upheld the decision. Jet-skis were banned throughout San Juan County waters and it was a decision that went on as a precedent to protect the flora and fauna of bodies of water in National and State Parks and even in the Everglades.

It would not have happened without the support of the SJC Parks Board and the SJC Commissioners. Back then, the environment mattered. These days it appears to be a commodity. The results are devastating. Right when the planet is calling out for protection on every level, San Juan County is turning a blind eye and a cold heart to our fragile environment. We banned plastic—but didn’t. It is everywhere. Because of profiteering, the critically endangered Southern Residents have been chased out of their core critical habitat. They can no longer access their dwindling food supply. And as the news shouts out about the SRKWs not showing up as usual, all those who are benefitting from the SRKWs in one way or another are fixated on the convenient mantra, “There’s not enough salmon.”

Okay. If there was a minefield around your refrigerator, would you go there? Endangered Orcas AWOL since early May

According to Dr. Timothy Ragen, the retired director of the U.S. Marine Mammal Commission, there’s no reason to assume that marine mammals won’t return to their preferred habitat once it has been restored, and part of that restoration involves reducing all the noise and disturbance.

It might take a while, but they return when their habitat is returned to them. To hear the so-called “experts” continuing to moan about the lack of salmon when they are financially benefitting from the whale-watching industry and refusing to support any action to quiet the waters, is nothing short of shocking.

I moved here because it was a critical time in my life and I needed the peace, quiet and beauty of these surroundings if I was to survive. As the planet faces it’s Sixth Extinction, brought about because of us humans and our destructive ways, it is truly heartbreaking to watch it happening right here in this fragile county. 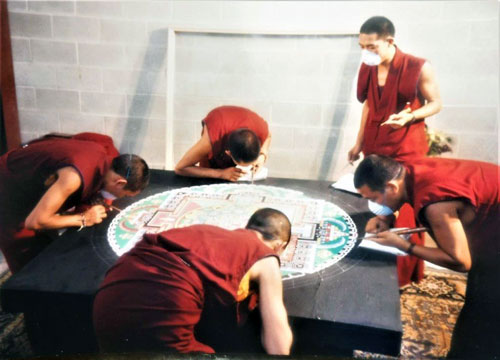 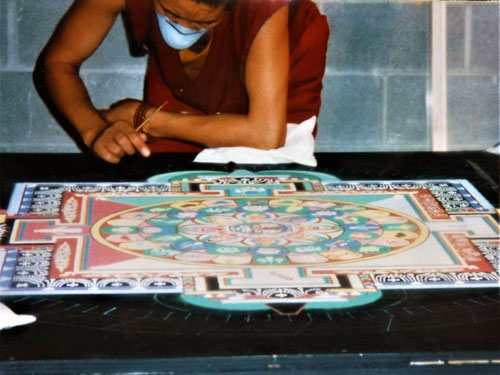 Last week, as I self-pitied my way through my coughing misery, I did some sifting and sorting through the boxes of my life. I came across a small container of colored sand and it stopped me in my tracks. During one of our county fairs, we had Tibetan monks come and create a Sand Mandala in a corner of the fair building. They blessed the space with ceremonial prayers and then spent four days creating the mandala with grain-by-grain of colored sand. It was intricate and perfectly executed with prayerful attention. Then, at the end of the fair on Sunday afternoon, the sand mandala was ceremoniously “destroyed” and brushed into a special container. We did a somewhat ceremonial walk down to Jackson’s Beach where the sand was dispersed into the sea with blessings for all sentient beings. One of the monks gave me a teaspoon of the colored sand. I had forgotten all about it. 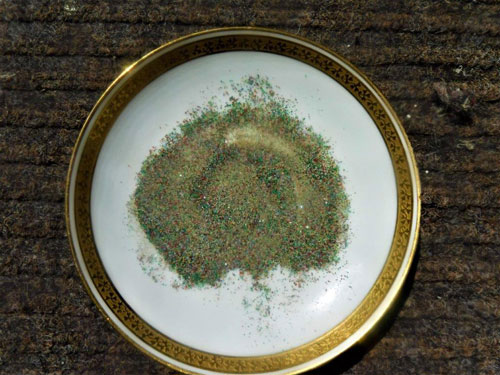 The Tibetans have lost their homeland and hundreds of thousands of their people to the Chinese takeover of their country. In 1959, His Holiness the Dalai Lama escaped from Tibet to India, leaving his homeland and his people so he could carry on the sacred traditions and keep the Tibetan cause as well as Tibetan Buddhism alive in this world. The Tibetan monks at our county fair had every reason to despair. Yet they were all about compassion and love for life in all its manifest forms.

Being sick means being couched in front of the TV. On Sunday, I watched 60 Minutes. It included an interview with 99-year-old Ben Ferencz, the last surviving Nuremberg prosecutor. He cried talking about the torture and murder of this people during the Second World War. He laughed about things too. His spirit was alive and well and he is still working for global justice. When questioned by Leslie Stahl about his perseverance, he said, “It takes courage not to be discouraged.” It is an interview worth watching.

When I go to India to teach writing workshops it is to Deer Park Institute in Bir, a Tibetan settlement in Himachal Pradesh. In their shops and on the street, the Tibetan people are warm and welcoming to strangers. They exude kindness and compassion.

In my sickbed I was reminded about all that has been lost on this planet and how easy it is to turn the other way about matters large and small. I was also reminded about the courage it takes to persevere through tragedy and hold on to compassion as we witness the violation. In our small island county, we are blessed with a bounty of beauty that includes the Southern Resident orcas, the most evolved marine mammal on earth. They, too, have families, language and intelligence. They have history too—as sacred companions to Native Americans and First Peoples of the West Coast.

If we can rise-up and do what it takes to save them from extinction, perhaps we have a chance of saving ourselves.