October 19th was Orca Recovery Day. The Conservation District organized a shoreline restoration event out at Cattle Pass Visitors Center. There was a good turnout of people. Shovels, gloves, plants and lunch were provided and there were brief presentations too. The primary talking focus was the science of it all. When it was my turn to speak, I could not help my unscientific self. My question blurted out along the lines of: “How is science saving the Southern Residents from extinction?” 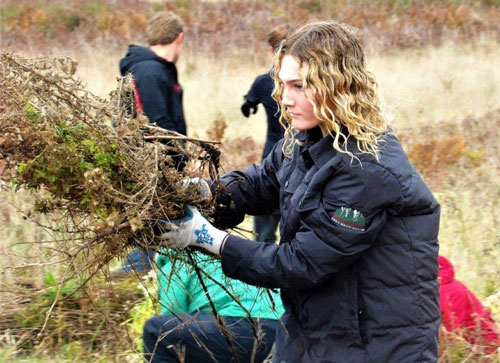 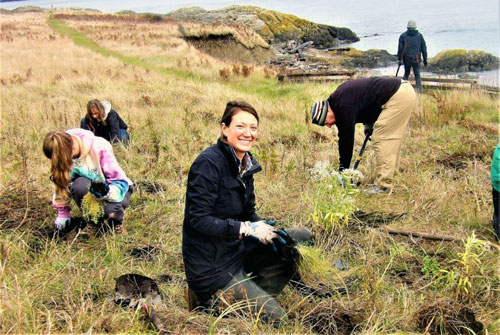 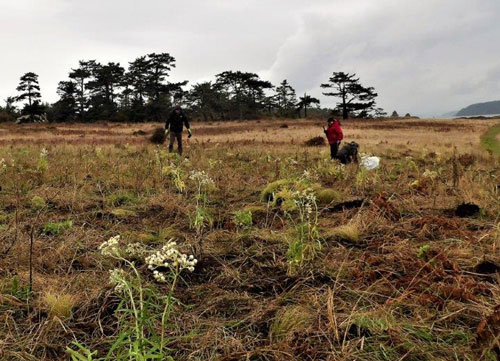 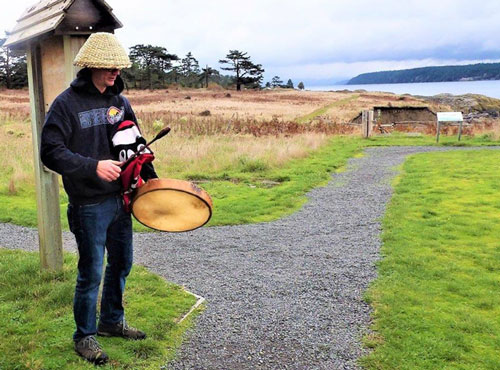 I am not a scientist. I am simply a 50-year resident of the shores of the Salish Sea. Before moving to San Juan Island, I lived on Bainbridge Island. Back then, the orca whales were not news; nor were they tourist bait. They were simply an accepted part of our marine neighborhood.

It was in 1991, shortly after I moved to San Juan Island, when I had my first personal encounter with the orcas. I’d taken my partner to the early ferry and was heading home the leisurely way along the west side just south of Lime Kiln State Park when vigorous activity in the water caught my attention. I pulled over (there were no official parking areas back then) and was completely stunned by seeing up-close the play going on within a pod of orcas. They were only a few yards of the shoreline, and, no question about it, they were having fun. They exuded a joyful exuberance that felt like a celebration of life in its most manifest glory. The encounter moved me to my core—and to tears.

I had moved to the island to hide out from my past. A past that had hidden from me until a few years earlier when it exploded into my life and took me down. San Juan Island came about by an “accident” that turned out to be a miracle. The unrelenting natural beauty of it all became a profound healing journey. One for which I will be forever grateful.

Back then, Westside Road from the State Park heading north was unpaved and the locals wanted it kept that way. Driving along it to our inexpensive waterfront rental on Andrews Bay was always a meditative jolt into slowing down. In doing so, the green wonder of fern and forest took over and had its idyllic way through the State Park for a couple of bumpy blissful miles.

After that first encounter with the orcas, I routinely drove “the long way” along the west wide into town. During that first summer, the orcas were there regularly, often for many hours at a time. They lived their lives unencumbered by adoration. The following spring, the rental went up for-sale and my normal neighborly connection to the orcas was no longer routine. It had to become “on-purpose.” And it did. I didn’t see them as often, but I did see them. Once I was witness to a greeting ceremony between two pods. Their joyful interaction with one another was stunning to behold.

These encounters were gifts of the natural world under natural circumstances—I was in my natural environment and the orca whales were in theirs. There was no invasion of territory. It was this instinctive sensibility that made me say “No” to Jet-ski whale-watching tours launching at San Juan County Park when I was Parks Superintendent. It was a no-brainer and no amount of legal rationalization was about to change my ground.

“Well, I guess we’ll have to defend you,” was the response of the SJC Prosecuting Attorney when I refused to compromise.

It took a few years, but the decision was ultimately upheld by the WA State Supreme Court. One sentence in their 1998 26-page decision underscores the acknowledgement of invasive human behavior: “Finally, it would be an odd use of the public trust doctrine to sanction an activity that actually harms and damages the waters and wildlife of this state.”

Now, more than 20 years later, science and tourism activities that harm and damage the “waters and wildlife” are part of the norm. They have driven the Southern Resident orcas to the brink of extinction through invasive activities that are non-stop, profiteering and full of self-congratulatory rationalization.

What happened? Where did all the principles go?

Capitalistic crassness has wreaked havoc globally, nationally and locally. It is sucking the planet of life—literally and spiritually. It has undermined integrity, dehumanized humanity, and set us on a course of global destruction. And it is doing so right here in San Juan County waters where the most intelligent marine mammal on the planet is being exploited into extinction.

It wasn’t always this way. Mark Anderson, who started Orca Relief Citizens’ Alliance more than 20 years ago, was also the first director of the Whale Museum. He established it as a science research institution, and he had one rule: Researchers were not allowed to say where they had observed orcas for 24 hours. It was obvious to him that science could be invasive and exploitative, and it wasn’t going to happen on his watch.

Sadly, the exploitative partnership between science and tourism has exploded throughout San Juan County. Permits for orca-interested photographers are as commonly issued as permits for research. The orca-spotting services are extended to researchers, photographers and whale-watch boat operators. The Southern Residents don’t have a chance to be at home in their home waters.

A year ago, when Tahlequah carried her dead calf for days in a display of grief, the world paid attention. I did too, but my questions were different: “Why are we seeing a photograph and being told the calf lived for less than an hour? How do we know that it wasn’t the noise and disturbance from the boat that contributed to the death?” The birth of a Southern Resident orca calf requires the ultimate access to echo-location abilities for essential connection between mother and calf. How do we know the display of grief was not an anguished cry of “Look what you have done?”

This past weekend, there was a film at the Friday Harbor Film Festival that informed and inspired me in ways I could never have imagined. Symbiotic Earth is about the scientist Lynn Margulis and her ground-breaking research into symbiosis as the fundamental driver of evolution. Our interconnectedness is why there is life on earth. “Survival of the fittest” is tragically misleading in comparison to the inherent collaboration between all life forms on this planet—including our own. The film brought me to tears as it illuminated our biological partnership with everything from the smallest of bacteria to the trees, to the air, to the sun and everything in-between.

“She lived in awe,” said another woman scientist about Margulis who fearlessly took on the scientific reductionism that so defines the male-driven research process. In doing so she marginalized herself in the good old boys’ club. But she stayed the course, gathered support from enlightened male scientists, and founded the Gaia Theory of interconnection and interdependence with James Lovelock. Awe at it all was her personal discovery and her scientific inspiration.

It was awe that the Southern Residents inspired when first I saw them. I knew nothing about them. But I experienced them. As they reveled in the waters with one another in exuberant relationship, I was an ignorant bystander experiencing the inevitable enlightenment that comes when awe carries us into the realm of majesty and mystery. At a time in my own life, when life was barely worth living, the Southern Residents manifested the sacred nature of life in all its manifest forms. It is a lesson that serves me daily—from the drop of rainbow dew to the endless sky, I am put in my place within the nature of it all.

Witnessing what we are doing to the Southern Residents is devastating. All the thousands of years in which they were free to be in their home waters are no longer. We’ve polluted their waters and diminished their food supply. Now we are admiring them into extinction for profit—monetary and professional—precisely when we could extend them a lifeline of hope by leaving them alone to forage, communicate and navigate in their home waters. Instead, we are exploiting their dilemma on behalf of profit and professional privilege. It does not have to be this way.

I will leave the last word with Lynn Margulis:

“To me, the human move to take responsibility for the living Earth is laughable - the rhetoric of the powerless. The planet takes care of us, not we of it. Our self-inflated moral imperative to guide a wayward Earth, or heal our sick planet, is evidence of our immense capacity for self-delusion. Rather, we need to protect ourselves from ourselves.”

Note of full disclosure: Yes, I am the Executive Director of Orca Relief Citizens’ Alliance. In 2016, along with the Center for Biological Diversity, ORCA filed a Petition to National Marine Fisheries Service for a Whale Protection Zone in the SRKWs core critical habitat off the west side of San Juan Island. In August 2019, a follow-up lawsuit was filed by ORCA and CBD because of Federal non-action re: the Petition. NMFS will be holding a Public Hearing regarding the plight of the SRKWs on Tuesday, November 12 at Brickworks in Friday Harbor from  5 to 8 pm.

Symbiotic Earth can be viewed on Vimeo or on Amazon Prime Video.