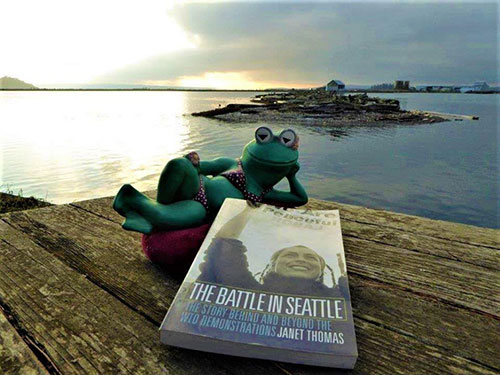 It is the 20th Anniversary of WTO Seattle, the week-long wave of protests that shut down the WTO meetings in Seattle and brought a glimmer of hope to our global future. Tragically, for the planet and her people, all the critical conditions that provoked the protests have done nothing but increase—globally, locally and everywhere in-between. Corporate exploitation that increases the wealth of the few is the new “evolution.” Unfortunately for the rest of us, it supports the financial “evolution” of a few over the life-sustaining evolution of the planet and all her people. 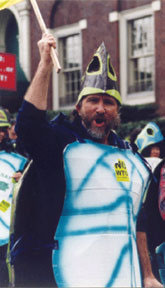 A couple of weeks before WTO week, I went to a workshop on Global Economic Justice at St. Mark’s Episcopal Cathedral in Seattle. I was as curious about the socio-economic religious connection as I was about the topic itself. What I learned was that global economic injustice and exploitation were destroying human lives around the world. The “religious” connection was all about survival of species large and small and the sacredness of all life on this planet. During the presentation, David Korten, author of “Post Corporate World” and “When Corporations Rule the World” urged us all to show up on the streets of Seattle to protest the WTO—the World Trade Organization. When I got back to San Juan Island, I discovered that my neighbor, Ben White, was creating turtle costumes for environmentalists to wear on the streets of WTO Seattle. Suddenly, all signs indicated I should be there. At the time, I was editor of a magazine and spent a couple of days in Seattle each week. So, on November 30, 1999, I slipped out of the Ballard office & grabbed a bus downtown. It was to be an extended lunchbreak and it became a rest-of-the-day adventure that was life-changing from the inside out.

I walked alone so there was no personal distraction—but the last thing I felt was “alone.” The sense of community on the streets was vibrantly alive with teachers, students, farmers, labor union members, animal rights and environmental activists, religious and spiritual leaders, attorneys, Raging Grannys, community leaders, Native American leaders from across the country, activists from around the world, and an outpouring of regular people, like me, who knew something was going wrong on our home planet but didn’t know exactly what. To help us understand, local, national and international scholars gave workshops throughout WTO week about the corporate invasion of consciousness that was separating us from ourselves, one another and this earth we call home. 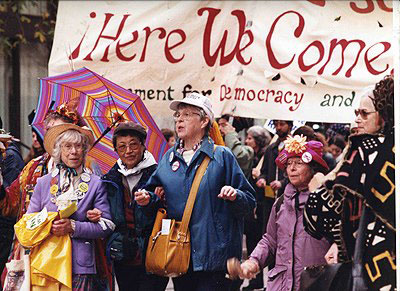 Raging Grannys on the streets of WTO Seattle

It was a stunning convergence of humanity and as I stood in the stadium at the Seattle Center and heard speakers from around the world address the damage being done by corporatized manipulation of reality, every unspoken question inside my body, mind and spirit was addressed. Afterwards, I could not stop talking about the experience and, as a result, I was asked to write a book about it all. Writing “Battle in Seattle—The Story Behind and Beyond the WTO Demonstrations” took me down into the depths of inhuman greed and exploitation and up into the heights of human heroism determined to save the integrity of life on earth. I wish I could say it was a turning point in the right direction—but no, the corrupt power of money continues to demean what it means to be human and destroy what it means to celebrate life on earth.

How did we shift from our species surviving to the wealthy thriving as a global mandate? It’s a momentum that shreds to pieces the profound truth of symbiotic interdependence as the creative force in the universe. It is a momentum that paves the path to extinction. And as it does so it robs life of meaning.

There were brilliant voices speaking out throughout WTO week in Seattle.

Here are a few abiding quotes from the “Battle in Seattle”—most from participants in WTO week. The first is from former islander, Ben White, who fought non-stop for nature—from trees to turtles. He is no longer here with us on earth. But he is everywhere.

“My own belief is that consciousness does not reside in the individual. We pick up on it like you do a radio wave. It changes because of who we are, but I think it’s in every molecule, including the rocks. And there are two basic rules of consciousness. Rule number one is that life will out, no matter what. And rule number two is the main rule governing human society: Everyone wants freedom. And they will eventually get it. No matter what.” – Ben White, Animal Rights Activist

“A deadly monoculture of global economism is now being created by the WTO. As with fundamentalist religionism, we must face this materialistic ideology at the beginning of the new millennium as a major threat to world peace and the integrity and future of the earth. At the WTO demonstration in Seattle, I felt the dawning of a global ethical society. Arising from the ashes of corporate hegemony and government complicity and corruption, it links the rights and interests of all beings, human and nonhuman, with a healthy environment, a healthy economy, and healthy communities.” --Dr. Michael Fox, Veterinarian and Bioethics Scholar

“The World Trade Organization is a symptom. It is a symptom of an illness, a very significant illness. A cancer that eats its host. It is a symptom that started 5,000 years ago with a particular kind of thought…We believe that there has to be systemic change, systemic change at all levels of education, of social existence. Systemic change in economics. Systemic change in spiritual understanding. We need to look at a new narrative if we are to survive into the next millennium. That new narrative has to be founded upon principles that the whole earth is sacred; all life is sacred. That we can only survive if we have a sustainable life system. That we change how we behave.” --Chris Peters, President and CEO of Seventh Generation Fund

“As a result of the war, corporations have now been enthroned and an era of corruption in high places will follow…until all wealth is aggregated in a few hands, and the Republic is destroyed.” – Abraham Lincoln

“Who are these legal fictions that we ourselves have created? And why have we allowed them to worm their way so intimately into our lives? How did they get to be omnipotent? Who gave them personhood, limited liability, and immortality under the law? And many of the same rights and privileges that we humans have? Does a corporation have a soul? Can it love? Show remorse? Do corporations serve us, or do we serve them? --Kalle Lasn and Tom Liacas, “Corporate Crackdown,” in Adbusters, August/September 2000

Episcopal Bishop Vincent Warner was on the streets of WTO Seattle as part of Jubilee year events. In biblical tradition, a Jubilee year is the fiftieth year, the year when slaves are set free and debts are cancelled. In his previous life as one of the fastest-rising young people in business and advertising, Bishop Warner was in Wash. D.C. on business on the day of Reverend Dr. Martin Luther King Jr.’s funeral. A few months later, Robert Kennedy was assassinated. Warner went to see the president of the company and said he was leaving. “He told me I was crazy. I told him I had to move away from the profit-and-loss sheet and deal with the issues of peace and justice that were going on. So, I went to seminary. My entry into all of this was through civil rights and justice issues.” --Bishop Vincent Warner

“The more alive we are, the more rewarded we are by the wisdom of earth and nature, the less dependent we are on the power of money and prestige, and the less damage we do to one another and to the planet. When are we going to learn this in contemporary society?” Dr.Michael Cohen, long-time San Juan Island resident, founder of Project Nature Connect, prolific author, accomplished musician, and leader of Monday evening contra dancing at the Friday Harbor Grange.