Two days ago, I awoke to smoke in my neighborhood. It signaled the tragic loss of buildings and businesses in Friday Harbor including the historic buildings that were home to beloved Herb’s Tavern and Windermere Real Estate. This heartbreaking occurrence added another deep layer of grief to these times. 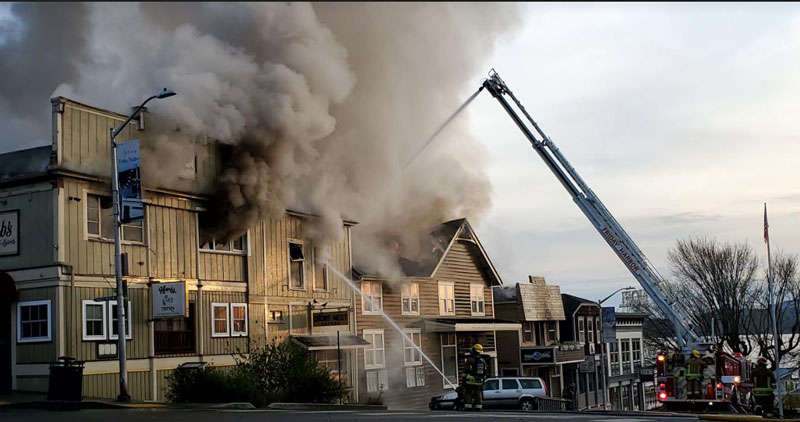 Over the past two years, the words on the street have changed from cheerful acknowledgement to heartbroken commiseration. I have learned this up-close and personally. I no longer respond “Fine. How are you?” to the “Hey, how are you?” greeting that prevailed throughout the no-Covid, no-environmental disaster, no-war, and now, no Herb’s, times. What I’ve noticed is that “Hi” stops in its tracks and the unspoken sadness of it all takes up the space between us as we greet one another on the street, at the grocery store, the post-office, the gas station and all the other public spots that once held our cheerful acknowledgement of one another. We now share the sad awareness of it all in one another’s eyes.

The tragic fire losses will deepen this grief. The gravity of it all is overcoming the cheerful grace of optimism that once ruled the casual social encounter in downtown Friday Harbor. I am fully aware that I have a choice in my response. But I no longer have the inclination to choose cheerfulness over concern about it all. In Ukraine, how one Russian man’s power- and ego-based cruelty towards human-beings can be so destructive of innocent men, women and children is utterly shocking. The restraint in response shown by other countries reflects the horrific fear of an outbreak of nuclear war. It is that simple--and that horrifying. Giving help to Ukraine in these times means asking for even greater tragedy. What the effff is the matter with us? When did being human become so inhuman?

This question has a long history in my life. It makes me ever more grateful for the humanity that abides here on the island. The care and concern of our local non-profit organizations that help others as well as the individual generosity that funds the non-profits is a great gift. And the for-profits too. On the very day of the fire there was an outpouring of support for those who are suffering a great loss. We are all blessed to live here. Even as the cost of it all increases non-stop.

As the war upon Ukraine continues to raise its ugly head of insanity and inhumanity, I am bewildered beyond words. In nature, evolution depends upon inter-relationship, inter-dependence, and inter-being. What does that mean in relationship to human-beings? Are we, or are we not, a part of the natural world? This question is raising its head more and more often as I work on a book about the Southern Resident orcas and their home within the Salish Sea and upon this planet. The research is taking me into both the light and the dark of it all.

We humans are destroying the very foundation of our existence. We are destroying the natural environment on behalf of profit--and along with it destroying the future of life itself. And the war upon Ukraine by Putin and his slaves is defying the very concept of human evolutionary intelligence. Life in all its manifestations is dependent upon inter-dependence, the connections between us all--and the nature of it all. And it all is not dependent upon us. If there is a species that is dispensable to the future of life-on-earth, it is the human species. So, what the eff is going on?

I’ve been engaged in activism of one sort or another since the late 1960s when the anti-war and anti-racism movements arose in this country. At Fort Dix, New Jersey during the Vietnam War I was witness to young Black men coming home from Vietnam in pieces. It was an awakening to the atrocities of both war and racism--which was then firmly established in the country.

These days I am immersed in completing a book about the long-held sacred and highly evolved Southern Resident orca whales. They are officially known as the Southern Resident Killer Whales--a rather twisted name for them as they are the only species of whales in the Salish Sea that do NOT kill and eat other mammals. Their primary food is the salmon that migrate along the west side of San Juan Island. Which means they are an easy accessible target for the whale-watching industry; which means the Southern Residents get chased away from their food supply by the noise and disturbance in their waters; which means they are edging closer and closer to extinction.

As I research the book about the Southern Residents, I am continually moved and inspired by the cultural foundation of the First Peoples of the Salish Sea. They lived in harmony with it all. Harmony was the foundation of their lives, and it included their relationship with all the plants and animals too. Everything remained a miracle and their gratitude for it all was a foundation for their culture. I am truly bewildered by the lack of these qualities in the vast and invasive white population that descended upon them and, through violence, took over this land. Truth is, if indigenous qualities were inherent in the white people of those times, there would not have been invasions and destruction. Quite possibly there would have been partnership, community, and preservation of the environment.

Now if only we could preserve the partnership between all forms of life upon this sacred and beleaguered planet. There would be hope in every breath.

Janet Thomas has lived on San Juan Island for 29 years. She is the San Juan Islands Coordinator for Orca Relief Citizens' Alliance and was the Superintendent of San Juan County Parks when Jet-ski-whale-watching was prevented from launching from San Juan County Park, a decision ultimately upheld by the Washington State Supreme Court. She is an author and playwright whose work has been produced in Seattle, New York, San Francisco, Portland, Honolulu and Los Angeles. Her most recent books are: "The Battle in Seattle--The Story Behind and Beyond the WTO Demonstrations" and "Day Breaks Over Dharamsala--A Memoir of Life Lost and Found."