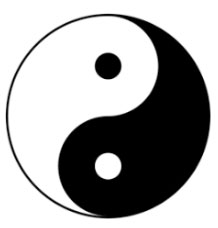 Yin yang. Many of us are at least vaguely familiar with this symbol. More than simply a stylized adornment in the South Korean flag, we recognize yin yang as representing some form of opposite-yet-complementary forces in the universe. Fewer, I suspect, understand that each part of this symbol is never completely isolated or separated from the other; in fact, each supports or protects the other to sustain balance and harmony.

It’s the holding of that mysterious duality that Buddhism does so well. American Tibetan Buddhist nun, teacher and author Pema Chodron hints at yin yang with these words:

“Whoever got the idea that we could have pleasure without pain?

It’s promoted rather widely in this world, and we buy it.

But pain and pleasure go together; they are inseparable.”

I don’t pretend to be able to wrap my head completely around yin yang. But what my brain CAN grasp is that its combination of interconnection and interdependence feels especially evident in our world today…

An example of yin yang duality and complexity unfolded at our own federal Capitol last January 6th: In the midst of a shocking insurrection filled with violence and even death, one armed officer in the Capitol police was challenged by a group of angry rioters and feared for his life. Recognizing he’d only worsen his chances of surviving by using his gun, he deliberately “appealed to their humanity,” declaring, “I have kids! I have kids!” According to his account, a group of other rioters responded by starting to form a protective circle around him, saving him from harm.

Here’s an example from across the Atlantic, reported in a recent documentary: An expansive elephant advocate group in Botswana has been working tirelessly to save an orphaned baby and ensure its thriving; concurrently, the same team is struggling to prevent poachers from continuing to slaughter elephants for their ivory.

Fixating on the shadows lands me (us) in very dark places. That’s when a balance of information and exposure is essential. Only by embracing yin yang in its entirety can we discover the complete picture, which always includes the light.

Yes, there’s horrific global hunger and unnecessary waste… AND, the town of Galdakao, Spain is the first to install a “solidarity fridge,” where citizens bring leftovers so those in need can enjoy the food and waste is minimized.

Sure, there’s much corruption in both the political and corporate world… AND, Norwegian politicians recently withheld support for oil drilling off its Lofoten Islands worth billions of dollars.

Undoubtedly, there’s a deplorable amount of elder abuse and neglect… AND, closer to home, last year a Utah lover of take-out pizza, Carlos Valdez, mobilized his virtual community to donate over 12K for his longtime, 89-year-old delivery man, Derlin Newey (so Mr. Newey wouldn’t have to work in his old age)!

Absolutely, there’s shameful, longstanding racism and that injustice is still clearly evidenced today… AND, in response to the mounting calls for reparations across the U.S., the Jesuit order within the Catholic Church just pledged $100 million to help atone for the original buying, selling and enslavement of Black people.

All the pain, loss and suffering surrounding COVID-19… the misinformation, conspiracy theories, discord and sharp divisions… the emerging variants whose higher transmissibility require sustained vigilance and protective measures… AND the courageous, tireless, sacrificial giving on so many fronts… the inspiring examples of global and national unification and cooperation… the collaborative resourcefulness of science culminating in multiple vaccines that promise to accelerate a return to new normalcy.

Yin yang. One cannot exist without the other; it’s a package deal. We might never understand why everything happens—good, bad, pleasant or painful—but we can choose to hold it all as best we can, and learn from that holding.

May I, we & all beings, hold and accept what is and what isn’t, as best we can.

Most services are available in Deb's studio or via phone or Zoom. For more information or scheduling, please go to www.journeystohealing.com (website). bethechange5@rockisland.com (email), or 360.317.4526 (texts preferred).