Over the Fourth of July weekend, I drove to the Land Bank's Westside Preserve near Lime Kiln Point State Park. Standing on a southwest-facing slope looking out upon Haro Strait rays of sunlight skipped across the calm blue-green sea in a shimmer of sparkling light. Summer had finally arrived and the white-crowned sparrows singing nearby proclaimed it so.

I had chosen that spot to look for a plant rarity in bloom, but found more appealing the many species of grasses that overran the hillside giving way to the rocky intertidal. The terrain - shoreline and upland - was an abstract of textures and patterns reflecting thousands of years of post-glacial changes. The thin soil was a mix of fine glacial till that clung to the rocky substrate providing a nourishing medium for hardy flora to thrive.

The grasses were in flower and I was disappointed at not having my loupe to examine more closely the intricately woven inflorescences. Still, it was interesting to see tiny, green-lacquered insects exploring the seed heads, and wondering what role they were playing in the cycle of life of these native and non-native grasses. 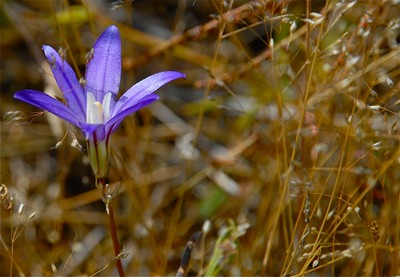 Walking along the trail, I spotted a familiar wildflower nestled deep in the grass: harvest brodiaea (Brodiaea coronaria), often called harvest lily. Its small, funnel-shaped flower, on a short bare stem, had unfolded its six lobes in a lustrous violet-blue sheen looking splendid in the grass. The plant was, to me, emblematic of summer's arrival. A little farther down the trail, I spotted another species of Brodiaea and just that quickly my attention shifted toward the wonderful world of lilies.

The Lily Family (Liliaceae) is a large group of flowering herbs and shrubs primarily from bulbs and rhizomes. They range worldwide mostly in temperate and sub-tropical zones. Lilies are monocots, meaning seedlings typically have one seed leaf, as opposed to dicots that have two. They are both sun-lovers and shade-dwellers. Some lilies are small and inconspicuous and others large and showy. This family of flowering plants is believed to have evolved nearly 58 million years ago during the Paleocene.

In the San Juan Islands we have several species of these perennial herbs that bloom from the first day of spring into the summer: most are sun-lovers. At low elevations, white fawn lilies (Erythronium oregonum), common camas (Camassia quamash), great camas (Camassai leichtlinii), death camas (Zygadenus venenosus), and chocolate lilies (Fritillaria lanceolata) have come and gone, although their growing season was late in arriving this year. But there are still some lovely lilies to be seen in open habitats about the islands. 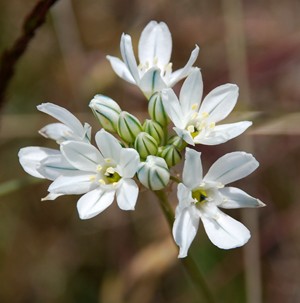 Finding the harvest brodiaea was a treat. As I continued my walk down the slope, I found dozens more of the dainty flowers mingled with the grass. Then I found a second Brodiaea - a bit taller - along the trail. This was the white brodiaea or hyacinth brodiaea (Brodiaea hyacinthina) a member of the same genus. The snowy white, bell-shaped blooms sat in a cluster at the top of the stem, greenish mid-veins accentuating the pristine appearance of the wildflower even though it was partially shrouded by other vegetation.

Two Brodiaeas along the trail: what fun! And, I had seen two more members of this lily clan in bloom just a few days before at American Camp.

My favorite was Howell's brodiaea (Brodiaea howellii) a stately plant with pale blue, trumpet-shaped blooms that sometimes shine nearly lilac in the late afternoon sun. Their stems are much taller than the harvest lily and white-cluster lily and give the howellii a regal presence on the plain. 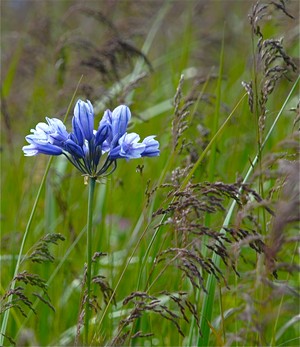 Like the other Brodiaea, Howell's stores nutrients in a bulb that is securely rooted in the soil. Renowned botanist Leslie L. Haskin wrote eloquently about this plant in Wild Flowers of the Pacific Coast over forty years ago.

As a field biologist, he had investigated the bulbs of all the native lilies of the Northwest. He knew many of them, including camas, were prized by the First People as a source of nutrition. He mused: "The edible bulb of the white brodiaea is probably the finest of all, but it is so deeply seated in the ground as to make the task of securing it an exceedingly toilsome one. Perhaps this is just as well, however, for to civilized man the beauty of the flower is worth far more than the food value of the bulbs."

The genus Brodiaea were initially named to honor the Scottish botanist James Brodie in 1811. Howell's brodiaea was named to recognize Thomas Jefferson Howell (1842-1912), one of Oregon's earliest botanists, a man of science revered to this day. Thirty species of plants have been named in his honor.

But times change and scientific classifications change with it. Birders have grown used to the "lumping and splitting" of species that inevitably outdate their field guides. The same is true of botanists who, as classification becomes more precise, continue to make adjustments to the nomenclature.

Such is the case with Brodiaea. Both the common and scientific names of harvest brodiaea remain intact, but hyacinth brodiaea has been altered to hyacinth triteleia (Triteleia hyacinthine), and the Howell's into large-flowered triteleia (Triteleia grandiflora). In Greek, Triteleia means "three complete" and in botany this conveys the fact that the flower parts of this genus come in threes, or multiples of three, as in six-segmented flowers. The current taxonomic and systematic changes have not been without controversy, though, and I found myself poring through several botanical books pondering the relatively new names.

Encountering the beautiful lilies on the trail at the Westside Preserve I regarded them still as Brodiaea. For some of us, progress comes slowly. I also like the time-honored ritual of commemorating the early pioneering botanists by continuing to use their names. I must admit, though, that the term Triteleia does have its allure, as the triplet lilies always have. 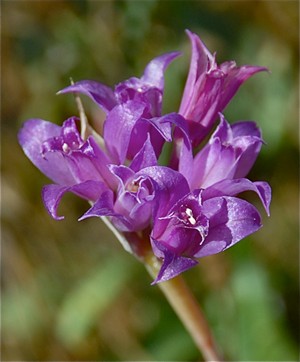 A fourth summer-blooming lily I found was Hooker's Onion (Allium acuminatum). While exploring the backshore recently, I came across this familiar plant in an unfamiliar place. I was used to seeing it below the Redoubt but there it was amidst yellow sand-verbena and beach morning-glory but still on a gritty substrate that suited its structure. This is another unassuming plant, rising only about five inches out of the sand. This lily flowers once its leaves have withered - an umbel of rose-colored blooms whose tiny urn-shaped tepals turn back at the tips.

Botanist and surgeon Archibald Menzies who shipped aboard George Vancouver's Voyage of Discovery first collected it, probably on Orcas or one of the smaller islands nearby. In his journal dated June 8, 1792 Menzies commented on having found "...a small well tasted wild onion which grew in little Tufts in the crevices of the Rocks ..." It was named for botanist William James Hooker of Glascow University and the first director of the Royal Botanic Gardens, Kew. Hooker's onion is also called Fool's Onion for that familiar smell and taste.

One last lily on our wildflower checklist is nodding onion (Allium cernuum). It is less abundant and less conspicuous than the others in this group; its white to pinkish flowers are found growing in clusters atop a gently nodding head in the shade rather than full sunlight. I encounter all of the above, except the nodding onion, with frequency each late spring and summer. It may be that my fondness for those early days of sunshine keeps me from this shade-loving little onion.

Once upon a time, before European settlement of the west, these lilies of the valleys and meadows and rocky slopes grew in profusion. On the Lewis and Clark Expedition, Meriwether Lewis wrote of seeing a field of blue camas lilies from a short distance and, at first, thinking it was a lake of fine clear water.

As decades passed and settlers arrived, the meadows were plowed, and cattle and sheep grazed the fields. Soon, introduced grasses took an additional toll on the small, native wildflowers that hold on precariously now in remnant habitats, but still enchant us with their presence.

The lilies of our fields are in bloom now. You may see them along the trails at Finlayson, the Redoubt, West Side Preserve, Mount Constitution, and likely on south or southwest-facing slopes elsewhere. As populations of these beloved little lilies dwindle, they need our encouragement - and our care - to keep blooming.

SAN JUAN NATURE NOTEBOOK / Late Blooming Lilies Text and photographs copyright 2011 by Susan Vernon. All rights reserved. No part of this column may be reproduced without the expressed written consent of the author.