It was the end of June and I still had butterflies on my mind. Even after a spring in the field doing Island Marble surveys and, in the process, encountering several other butterflies including azures, anglewings, elfins, ringlets, and admirals, I still felt I might have lost the opportunity to see a long-time favorite due to the rapid arrival of the summer solstice. Time does hurtle by.

The season of the Western Tailed Blue butterfly was on the wane. While I always make a point to find this species each spring, this year I wanted to do some closer observations of the gossamer-winged beauty and to catch up with the late- blooming wildflowers that shared its realm. 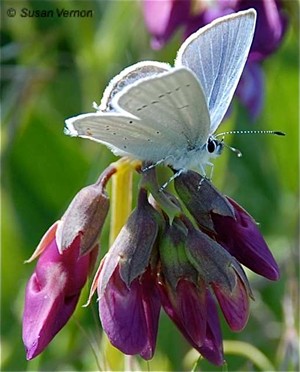 In the islands, the Western's preferred host plant (where the adult nectars, lays its eggs and the caterpillars feed) is the native beach pea (Lathyrus japonicas). I knew L. japonicas was near the end of its bloom and once the plant went to seed, the Tailed Blues' flight season would end, as well.

I got a few quick glances at Tailed Blues in May and early June, but that was not enough. I wanted to sit a spell in their midst and watch them leading their lives. This is a small butterfly, measuring only about one inch across - a member of the family Lycaenidae that includes blue, hairstreak, and copper butterflies. Most people don't even notice the sprite as they go walking or recreating along the shore. And, at best, it lives less than two weeks after spending nearly a year to metamorphose from egg to caterpillar to pupa and finally to flying adult. We have only a small window of time to enjoy its ethereal presence.

The Tailed Blues' realm, and that of the beach pea, is the upper shore zone beyond the advance of tides and waves. The south end of San Juan Island offers several beaches and coves that transition from a course sandy substrate to piles of driftwood and finally to the backshore.

I have written about this habitat before. Most of the year, it appears inhospitable to native vegetation - a desolate wasteland of weeds that are pummeled by fierce wind storms and rain in the winter and scorched by the sun in mid-summer. Nutrients appear scarce here, and plants have to be hardy to survive the ever-changing landscape of drifts and dunes. 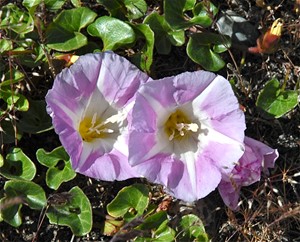 But, in the late spring and early summer this disheveled world is transformed into a lush landscape abounding with colorful plants that shine yellow, pink, scarlet and blue along the edge of the inland sea. This bloom belies the backshore's reputation for austerity. Bright yellow small-flowered fiddleneck (Amsinckia menziesii) beckons flocks of goldfinches; seashore lupine (Lupinus littoralis) attracts Spring Azure and Silvery Blue butterflies with its enticing purplish-blue-and-white blooms; and tiny pink filaree (Erodium cicutarium) is a brilliant beacon and important early nectar plant for Island Marbles. 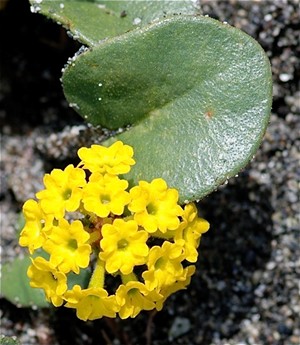 Later, beach morning-glory (Convolvulus soldanella) unfolds its showy lavender blooms on stalks so short that the funnel-shaped flowers appear to emerge right out of the sand; and yellow sand-verbena (Abronia latifolia), one of the hallmark plants of this domain, spreads across the flats. Its tiny bright tubular flowers, arranged in umbels, look like waxy bouquets in the glacially tilled soil. Scarlet sheep sorrel (Rumex acetosella) has a fiery essence that delineates the edges of this zone. Its tide of crimson inflorescence sweeps dramatically along the margins of the drift mixing with grasses and thistle that inevitably reclaim this habitat. How could a newly emerged, tiny blue butterfly resist elements of this alluring spring awakening? I hoped I was not too late to find it one more time.

The Western Tailed Blue (Everes amyntula) is a fairly common species ranging from Alaska, through most of the Canadian provinces, down through the western United States to northern Baja, California. It is found in both eastern and western Washington from the mountains to the shore. In the San Juans, it flutters on purplish-blue wings just above the low-slung beach peas that entwine among dune grasses, lupine, and vetch that perfectly camouflage the frail blue frame of the Tailed Blue along the shoreline. It was first described by renowned French lepidopterist Jean Baptiste Boisduval; the account was published in 1852.

I knew just where to look for the Western Tailed Blues. I had been visiting them at a certain rather conspicuous spot for many years. As I suspected, the beach peas were fading fast, but I spotted one of the little blue lycaenids and was heartened to know they had not entirely disappeared for this year.

The butterfly - as predicted - was fluttering among the beach peas. L. japonicas - a native plant - was firmly established along the drift line remaining close to the moisture of the sea. I settled in on the sand, out of harm's way, to watch the fleeting wing beats of the pea-loving blue. I waited until late afternoon to stop at this site hoping I might find the Westerns retiring for the night. A breeze was blowing in from the west and I knew the butterflies would soon seek refuge from the chill.

At the height of the Western Tailed Blue's flight season here, dozens of the demure butterflies can be found among the lush peas strewn over long stretches of the shoreline. When newly emerged, the males' wings are crisp and boldly blue above with dark margins, and whitish beneath often with light spotting. When it folds its wings, the butterfly takes on a silvery sheen that makes it nearly imperceptible among the dense foliage that entwines in their niche. The females have more discrete coloration, a modest brownish-blue above that likely helps camouflage them from predators. On this late afternoon I watched the lithe beauties from several feet away using binoculars, the only way to truly appreciate the subtleties of the scaling on their wings. And, I did not want to disturb either the butterflies or the last blooms of their host plants.

The little blue I finally keyed upon was old - possibly a female but it was hard to tell even with good glass. The wings had faded to a light powder blue with a brownish-gray cast. There were nicks, scars, and tears along the margins and at least one of the "tails" (hair-like protrusions at the bottom of the wings) had long-since worn off. I strained to find the orange lunule: a crescent-shaped marking that adorns the hindwings of most Tailed Blues. Having seen many old butterflies, it was clear this one had endured challenges possibly including bird strikes and certainly from rain and windy weather. It had not been a welcoming spring for butterflies. 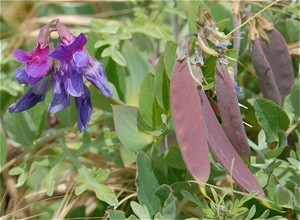 A week or so before, this Tailed Blue may have just emerged from its chrysalis. The beach pea beckoned the demure butterfly to sup its sweet nectar before undertaking its primary imperative: to breed and carry on its kind. Its fascinating life cycle - a true metamorphosis - takes a year. This butterfly - let's assume it is a female - likely bred soon after emergence, and then laid her eggs on the inflorescence of the beach peas nearby. Her work done, the next challenge was simply to survive. Judging from the multi-layered habitat of predatory insects and birds, threats from the hiker's boot and other human interventions, plus rain and windstorms, I find it miraculous the little blue butterfly survived to old age.

I sat for a long time watching Everes amyntula. A chill was beginning to descend upon the scene and she was slowing down. I thought about the newly emerged (miniscule) caterpillars - her offspring - likely munching on flowers and leaves nearby, and I knew they would eventually crawl into the beach pea pods, feed upon the seeds, and then overwinter in those capsules until next spring when they would pupate and eventually emerge as the next generation of Tailed Blue butterflies. Observing the miraculous cycle of life - played out here with tiny blue butterflies - was certainly worth this trip to the shore.

And, I knew there was much more to this biological realm than I was seeing. Nearby, a piece of driftwood appeared to have been turned into some creature's dining table – strewn with half-opened and remnant beach pea pods. Ants, spiders, black-and-white wasps, and tiny four-legged green beings were scurrying about the substrate and vegetation. Feathers blew by. A maze of tiny trails through the vegetation spoke to the presence of voles or mice in the area. They all had roles to play in this niche. 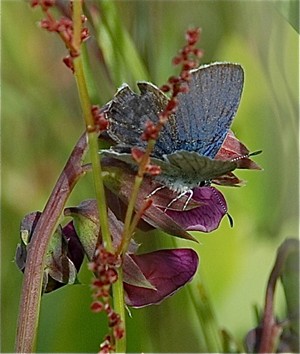 The old Tailed Blue positioned and re-positioned herself as the wind brushed through the latticework of pea vines and grasses that surrounded it. A fat bumblebee flew in and dislodged the fragile insect from high on one late-blooming flower sending it into the grass. She folded her wings and tried settling in, but it did not seem to be the right spot. The Blue fluttered just a bit out of the grass and back onto a blooming pea tucked among vines, sorrel, and grasses. She folded her wings tightly again and swayed to the rhythm of the sea breeze – the movement rather like an incantation to life. The faint chips of juvenile savannah sparrows, the bold pronouncements of white-crowned sparrows, and the buzzing of more fat bumblebees dispelled the quiet behind the drift as the sun slid toward the horizon.

It was a beautiful scene. I looked about and saw two more Tailed Blues disappear into the blue-green maze of beach peas and grass. I did not know if they were going to roost for the night or simply taking a respite from the chill, but it did not matter. My curiosity about the Western Tailed Blue butterfly had inspired my walk along the backbeach to this special spot that has for many years reaffirmed my connection to this butterfly. And, I knew that the plants and the birds and the butterflies and the bees were all connected in the cycle of life of this unique realm, too.

Sitting quietly along the drift and observing the steadfast Tailed Blue settling in for perhaps one of its last nights on the backshore was a poignant moment. Such a captivating butterfly; such a unique setting; and such a good way to be reminded how important even seemingly austere natural areas are to all living things.

SAN JUAN NATURE NOTEBOOK / The Western Tailed Blue Butterfly. Text and photographs copyright 2011 by Susan Vernon. All rights reserved. No part of this column may be reproduced without the expressed written consent of the author.