Until a week or so ago, it had not been a good spring for butterflies. Unseasonably cold temperatures and above average rainfall are not a good combination for the ethereal insects that require ample sunshine to survive and to thrive in our rainshadow world.

But undaunted and ever optimistic, local conservation biologist Dr. Thor Hanson and I recently took a group of islanders on a butterfly walk. The event was sponsored by the San Juan Preservation Trust and hosted by an island family who has made land conservation and stewardship a priority on their property. Butterflies or not, we knew we would have a grand time exploring a patchwork of habitats that exemplified the connectedness of these intriguing insects to blooming wildflowers, shrubs and trees, and birds. It was the type of walk many of us liked the best - a slow saunter through a beautiful site, botanizing, birding, and finding unexpected treasures along the way. It had rained most of the week leading up to the walk but the skies cleared on Saturday morning and hope was running high that it would be a "butterfly day" after all.

Washington State is home to over 150 species of butterflies, but the San Juan Islands boast just shy of fifty species. That number is actually greater than might be expected for an area this small, especially in western Washington. The relative paucity of the butterfly fauna west of the Cascades is due to the rainy climate and extensive forest cover. The San Juan Islands, lying in the rainshadow of the Olympics, provide open sunny habitats with abundant flowering plants that are attractive to butterflies. 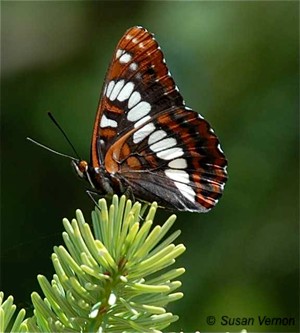 The key to finding butterflies is to understand their biology and food requirements. Locating both their host plants (the place where the adult butterflies lay their eggs, and where the caterpillars spend their lives) and finding the nectar plants that the flying adults use to sustain themselves after they emerge in the spring or summer months is crucial to the discovery.

Our plan - weather permitting - was to explore several habitats on the property, from woodland to rocky shoreline, and to catch a glimpse of some icon species that live here in the islands. We started in a mixed forest of Douglas firs, Pacific madrone, and alders where the red-flowering currant and salmonberry were waning. The ripening fruit on the salmonberries signaled that the Swainson's thrush would be arriving home soon. We also found spotted coralroot, black twinberry, and serviceberry in bloom.

Interesting, it was not a butterfly or a plant that first caught our attention. It was a Pacific tree frog hopping about in the grass, spotted by one of the group. Thor gently cradled the tiny green being and gave us a quick biology lesson. Finding the right mate can be a tricky matter for frogs. Thor told us about the female Panama golden frog that had adapted a "wave” of sorts to attract the attention of a sough-after male. The image of a golden frog - waving - stayed with us throughout the day and brought many smiles. 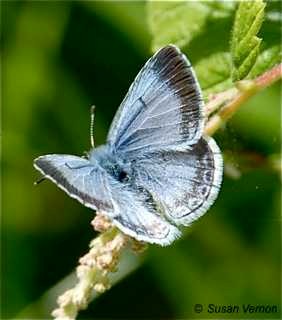 But, onward for butterflies. With only brief sun breaks, we concentrated on finding nectar plants we knew would attract the butterflies. Our first stop was a rocky outcropping covered with reindeer lichens. It also hosted a common plant – miner's lettuce (Claytonia perfoliata) that may be an uncommon nectar source of western tailed blue butterflies in the early spring – although the "tailed blues” prefer plants from the pea family. A short way down the path we found two species of geranium: dovefoot geranium (Geranium molle) and common stork's bill (Erodium cicutarium) are known favorites of spring azures and several other butterflies. 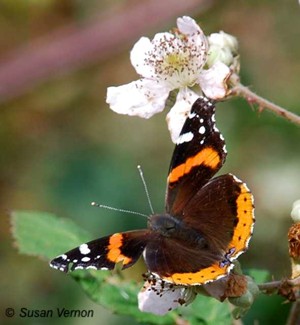 On the way to the shoreline, we stopped for a moment at a patch of stinging nettles (Urtica dioica). While often maligned for their searing sting, I pointed out that nettles are the primary host plant of the spectacular red admirable butterflies, Milbert's Tortoiseshell, satyr anglewing and west coast ladies. As flying adults, the admirables move on to thistle and blackberry to sustain them.

Nettles, thistles, and blackberries – products of disturbed ground - are important to many species of butterflies. I rarely miss an opportunity to praise these plants and to remind folks that to keep the intricate web of life intact for birds, butterflies and other insects, we need to accommodate plants that some consider unruly or weedy. As host plants, fruit-bearers, or seed producers they play remarkably important role in the life histories of many animals. When the red admirable butterflies migrated south through the islands three years ago, it was the ripened fruit of blackberries and hairy cat's ear that sustained them. 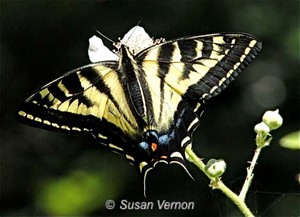 We made one last stop before heading to the shoreline and pointed out a fine willow. Western tiger swallowtails and mourning cloaks mate and lay their eggs on this genus of trees. As flying adults, the swallowtails and cloaks will be familiar visitors to island gardens where they will nectar on a variety of common plants.

We walked past lush carpets of western buttercups to the rocky coastline - a stunning west-facing site looking upon the cold waters of the inland sea; river otters often cavort in a nearby cove, and whales and porpoise likely cruise by, too. The outcroppings and balds were rife with blooming field chickweed (Cerastium arvense). This plant is a primary nectar source of the rare island marble butterfly that is found only on San Juan and Lopez islands. Discovered in 1859 on Vancouver Island, it was declared extinct in 1908. Then in 1998, it was rediscovered here in the archipelago but holds on precariously to its existence. Its survival is linked to both native and non-native mustard plants. Seeing the Cerastium, I suggested that having a mustard patch on ones property might be a good thing if it helped the beautiful, highly endangered insect (found nowhere else in the world) to survive.

But, our leisurely pace – and extended musing over plants - was taking its toll. Time hurtled by and we had a great deal more to see.

Along the edges of the balds, plantains might host another highly endangered butterfly - the Taylor's checkerspot - that was last documented in the archipelago many years ago; tall grasses would support tiny ochre ringlets and woodland skippers later in the season; gumweed will attract purplish coppers; and lance-leaved stonecrop (Sedum lanceolatum) and broad-leaved stonecrop (Sedum spathulifolium) would beckon to spring azures as would common camas (Camassia quamash). Nestled between the rocks was our native dewberry (Rubus ursinus), fruit for other fine, fluttering forms. 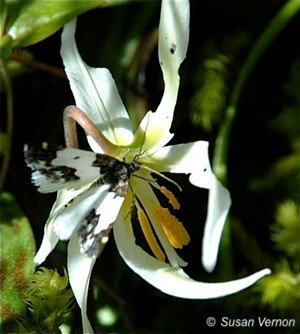 We found a small brown moth basking on the rocks but it flew to a quieter perch before we identified it. A kin to the shy shore-dweller is the half-white carpet moth – a tiny "butterfly-like” sprit found abundantly in the woods during early spring. They have a taste for white fawn lilies, also on this property.

Everyone seemed to get into the spirit of butterflies even without seeing them. One woman pointed to the structure of pink sea blush (Plectritis congesta) and commented on what a good perch the plant would make for a butterfly.

Nancy Spaulding and Louisa Nishitani were down on hands and knees looking at the finer points of forget-me-not (Myosotis discolor) and fringecup (Tellima grandiflora). Watching the artist and the botanist comparing notes was great fun.

With time almost gone, we moved to a towering rock wall holding up a hillside that retreated into a stand of second growth Douglas fir. Thor gave us another lesson, this time on temperature – pointing out that the warmth by the wall might accelerate the flowering of early plants. One fellow in the group had a field thermometer and declared that at the wall – rife with gold-back ferns, chickweed monkey-flower, and stonecrop – the temperature was easily ten degrees warmer than just a few yards away closer to the shore. We saw three species of clover growing in the grass just in front of the wall – a fine nectar plant for propertius duskywing butterflies that were likely beginning their lives in the forest behind, as were brown elfins and western pine elfins.

As we stood at the warming wall, a dragonfly whirred across our field of view. Was it Dean who suspected it was a California darner, one of the earliest dragonflies to emerge each spring?

The question on Thor's mind was: "Where was Bombus?" We did not see a single bee on the walk and it was concerning to the biologist. He took the opportunity, though, to tell us about how bees thermo-regulate -- making themselves warm on a cool day.

Soon it was time to go. Thor and I bid folks a hearty farewell; our intrepid botanist referring to the group as "raccoon naturalists.” Everybody smiled. We had a great time in the field, but fat raindrops were falling so we made a hasty retreat to the bus.

We left with some vivid impressions from the day not the least of which was marveling at the glacial striation of ribbon chert along the shoreline. A geologist might joke that the wildflowers just got in the way of our looking at the rocks and, from that point of view, it was true.

We got some great questions, as well? Where did the butterflies go in the winter? What about the wind coming from the west? Would the butterflies be more plentiful on the other side of the island where it might be calmer? Was the difference in the blue hues of the spring azure and western tailed blue butterflies a matter of pigmentation or structure?

We talked about the dragonfly migration through the islands two summer's ago; felt some angst about the abundant use of Latin names in a new butterfly book; and questioned what insects a saxifrage by the wall attracted? I took note of an abundance of swallows at the site and wondered how many adult butterflies fell prey to them each spring. I knew that the presence of our wood warblers was made possible, in part, by the abundance of caterpillars they consumed each spring. 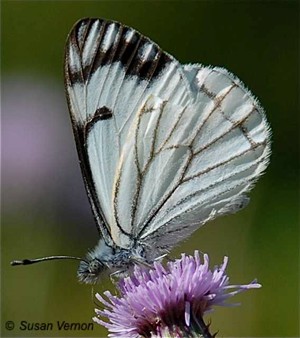 It was a great group. We came together to share in the wonder of discovery; to satisfy our curiosity; and to walk a beautiful piece of property that we knew would be forever in good hands.

Earlier in the day, we learned that the Preservation Trust had some new acquisitions pending. I wondered what butterflies might flutter about a certain round-top mountain on one of the outer islands, and I was pleased to know the place would be protected now. I suspected Thor might be thinking about a beautiful little vernal starwort he had found in a shallow pool on this property a few days prior to our walk. While not generally rare elsewhere, the plant is a rather uncommon occurrence on the island and that makes it special to us.

We had a great time on our butterfly walk making the connection between the flowering plants in the varied habitats and the plants' importance to the butterflies. We found the promise of butterflies with every blooming plant – if only the sun would shine. In Nature, it is all connected. And on this walk, I talked with some fine folks and felt a little more connected to them, too.

SAN JUAN NATURE NOTEBOOK / The Butterfly Connection Text and photographs copyright 2011 by Susan Vernon. All rights reserved. No part of this column may be reproduced without the expressed written consent of the author.