The sun finally came out and stayed a spell last week. I shut down my computer and headed for the shore. Soon I was settled on a piece of driftwood by the inland sea, binoculars in hand, scanning the sublime scene. It wasn't long before I spotted a beautiful creamy-white butterfly fluttering among a healthy gathering of tumble mustard plants on a sandy slope. It was an island marble - a rare member of the family of white butterflies called the Pieridae.

Every so often the butterfly would land on one of the plants, extend its long black proboscis into the faint yellow blooms and feed on the sugary nectar of life. The yellowish-green mottling on its hind wings made the marble nearly imperceptible on the plant- Nature's perfect camouflage on a delightful spring day. 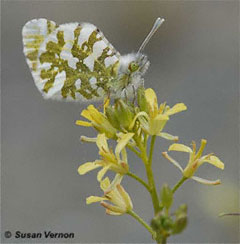 There is something special about watching a beautiful little creature going about its business and knowing there is no place on earth, except the San Juan Islands, where it exists. Add to the mystique, the saga of a subspecies of butterfly (Euchloe ausonides insulanus) that was declared extinct over a century ago on southern Vancouver Island and then rediscovered here in 1998. It is a tale worth repeating.

The marbles have been on the wing on San Juan Island since mid-April. This year, my first sighting of the butterfly was on April 16. Alas, the week that followed its emergence into our island world was fraught with rain interspersed with only short sun breaks and overcast skies. I worried about that little marble.

Life is short for most adult butterflies. In their winged phase, many species live only a few days to a few weeks. Biologists believe the island marble lives less than two weeks, not accounting for early death by predation or other threats. For the marbles that emerge early in the flight season (the period usually in mid-to-late April and early May), rainy weather may be a major deterrent to its ability to find food and to breed. Butterflies are cold-blooded animals and they need sunlight and temperatures in the mid-50 degree range to warm their bodies in order to take flight. 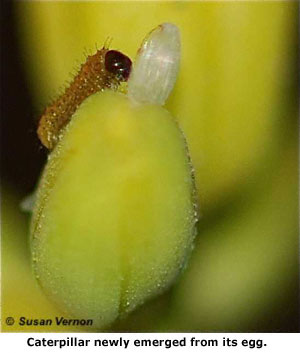 The butterfly life cycle is a miracle of metamorphosis: a four-stage process from egg to larva (caterpillar), to pupa (chrysalis), and finally to adult butterfly. For the island marble, once mating has occurred, the female lays her eggs on the flower buds of native and non-native mustard plants - its host plant. After approximately ten days, the eggs hatch into tiny caterpillars that feed on the flowers.

During the next three to four weeks, each caterpillar eats constantly during daylight hours, first devouring flower petals and then other parts of the mustard plants. As it grows, the caterpillar sheds its skin (molts) five times growing from a tiny yellow and black speck of life measuring less than 2 mm into a sleek silver and yellow striped larva up to 3 cm. long. After 35 days or so, the fifth instar caterpillar leaves the host plant and walks about the terrain seeking that perfect stick or other structure in low-growing vegetation upon which to attach, shed its skin one last time, and transform into a tiny gray chrysalis. It remains in that form throughout the fall and winter. Come spring, if all goes well, a full-sized butterfly emerges from the chrysalis to begin the final adult phase of its life. By late June, the adults are usually gone for another year.

The perils that await the island marble at all stages of its life cycle are daunting. One of my early experiences with the butterfly, in May and June of 2005, was characteristic of the vulnerability of this rare insect. During my survey work for the Washington Department of Fish and Wildlife, I monitored marble caterpillars on tumble mustard plants on a grassy south-facing slope at the south end of San Juan Island. I watched the robust little larvae make their living eating mustard blooms and pods day after day. But it wasn't long before I understood the challenges to their survival. Deer browsed the tops of the plants destroying eggs before they even hatched, spiders trussed the larvae, small birds swooped down for a quick meal, soil erosion sent plants over the edge of the trail and down the glacially scarred slope to the sea, and hikers trampled plants along the way. 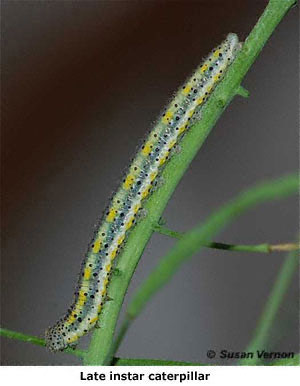 None of the marbles I monitored at the site survived that year. And the threats to the island marble and to other butterflies exist elsewhere: pesticides poison them, mowing destroys their host plants and larvae, new construction fragments and destroys their habitat, and non-native plants like pervasive Scot's broom overruns open meadows eliminating native plants vital to the survival of butterflies.

Each year as I continue doing surveys, I watch the assaults on this butterfly continue. Once the adult marbles disappear at the end of spring, the old adage "out of sight, out of mind" seems to apply. Most islanders don't realize that this rare resident continues its struggle to survive throughout the year. Those tiny gray chrysalides - the third stage of their four stage life cycle - remain precariously tucked away in the grasses of our meadows, in roadside vegetation, in vacant lots, under split rail fences, and even at new construction sites. They go unnoticed, but not necessarily unharmed, waiting for spring and a chance to emerge, reproduce, and continue their kind. Predators including voles and snails may devour them, harsh winter rains and snow assail them and, along the coastline, tidal surges may inundate their habitat. With a population thought to be only several hundred individuals, the island marbles' continuing presence in the San Juans clearly hangs in the balance.

But there is good news for the island marble, too. Biologists, naturalists, conservation organizations, and islanders are working hard to insure that we will always have this beautiful and tenacious little butterfly in our midst. Surveys continue, habitat enhancement and restoration programs have begun, research seeks to clarify the mysteries of their complex life cycles, islanders are working with biologists to support marbles on their properties, and public outreach programs are educating islanders about the unique nature of this rare animal and its inspiring history.

There is a brochure available through the Washington Department of Fish and Wildlife (funded by the U.S. Fish and Wildlife Service) that tells how to identify island marble butterflies and explains more about where they live, how they live, and what they eat. If you would like to know more about this truly unique subspecies look for the brochure at local conservation organizations or contact wildlife biologist Ann Potter at WDFW: email ann.potter@dfw.wa.gov.

Happily for islanders, the marbles are on the wing now. You might see these solar-powered beauties fluttering about our prairies and grasslands or patrolling the edge of a salt marsh rife with pickleweed, peppergrass and searocket. Look for large patches of field mustard plants. The bright yellow flowers are beacons for this butterfly. 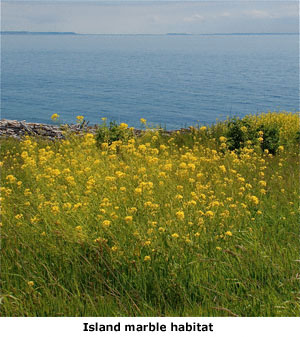 They also nectar (feed) on other wildflowers including field chickweed, stork's bill, yarrow and fiddleneck. While the marbles core population remains at the south end of San Juan Island, they have also been sighted in San Juan Valley, near False Bay, in the vicinity of Jackson Beach, and on the outskirts of Friday Harbor near the airport. Surveyors continue to look for them throughout San Juan, Lopez and other islands in the archipelago.

You may even have island marbles in your garden, although the butterflies you likely see there are common cabbage whites. If you have mustard plants in your yard, along your driveway, or on a disturbed piece of ground nearby, you might think about leaving the plants for the butterflies instead of using your weed wacker. And, if your property is open and sunny, you might like to create a "marble zone" to help support marbles and other wildlife. Biologists with the Washington Department of Wildlife would be happy to talk with you about it.

In the distant past, the island marble had an abundance of natural landscapes to explore and the threats to its survival were not, perhaps, as challenging as they are today. Over time, our wild places have changed dramatically and while this butterfly continues to exist in small numbers and plays an important role in the biological diversity of the archipelago, their ultimate survival here appears to be tied now to their making a connection with an expanded web of life that includes our island community. We can take pride in the fact that the San Juan Islands are home to a subspecies of butterfly that exists nowhere else on earth. Its life history is a saga of survival nearly unrivaled in the animal world. By helping support its continuing presence here, we may be making a powerful statement about the ability of people and wildlife to share remaining wild places and flourish in one another's company.

SAN JUAN NATURE NOTEBOOK / MARBLES IN OUR MIDST - Island Marble Butterfly, Part II Copyright 2010 by Susan Vernon. No part of this column (text or photographs) may be reproduced in any form without the expressed written consent of Susan Vernon. All rights reserved.