The rains last month dampened my spirits and I postponed some of my walks waiting for the showers to transition into a brighter spring. But the other morning I heard the song of a Swainson's thrush floating through the woods near my home and I knew procrastination was not serving me well. It was time to get back on the trail.

I chose a coniferous woodland for my walkabout – a classic island forest of Douglas firs, western red cedars, hemlocks, seaside junipers, and shore pines. Sword ferns, Oregon grape, and salal dominated the understory. I planned a long walk, but when I arrived at the trailhead the sounds that surrounded me were a persuasive call to linger instead in one small corner of this lush green world and see what forest-dwellers were about. Every crevice seemed to hold promise for discovery, or the possibility of a re-acquaintance of an old friend from springs gone by. 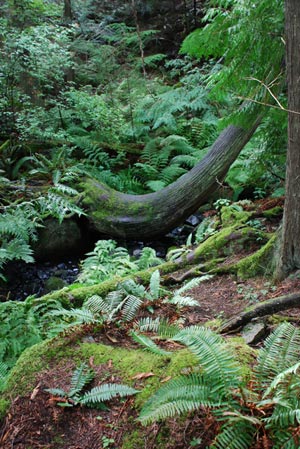 After so much rain in May, the woods were still moist and the air was dense with the aroma of blooming honeysuckle and wild roses growing among the conifers. It wasn't long before a female rufous hummingbird appeared at the honeysuckle that had twined around a huge stump. She inserted her long, slender bill into the plant's orange, trumpet-like blooms. Her body quivered slightly as she nectared on the flowers. Then, zoom! She whirred away in a blur of tiny green feathers. I wondered if there was a nest nearby with young rufies waiting for a sweet repast. Soon, the orange honeysuckle would give way to the pink (hairy) honeysuckle continuing the succession of blooms vital to sustaining the hummingbirds during their breeding season here in the islands. 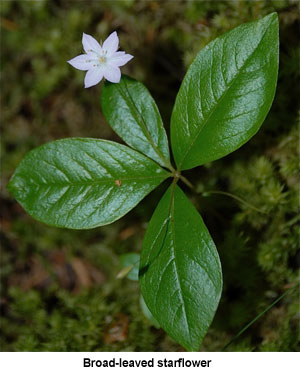 Below the honeysuckle was a carpet of small plants called broad-leaved starflowers (Trientalis latifolia). It is a gem of understated beauty. Its white-petaled flowers rest atop frail stalks that give the blooms the appearance of being suspended above a whorl of polished green leaves at the plant's base. There were hundreds of starflowers nearby. Looking closely at the colony, I found some stars were snow white while others cast a rosy-pinkish sheen. It has been suggested that the First People harvested the tubers of these plants for food during lean years.

Among the starflowers was another floral treasure: twinflower (Linnaea borealis) named for the famed father of taxonomy, Carl Linnaeus. It was his favorite plant. Like starflower, the twins' tiny pinkish blooms were conspicuous due primarily to the sheer mass of miniscule flowers growing among the moss and leaf litter on the forest floor. Looking about this realm, there were many hundreds, if not thousands, of these delightful plants sharing the understory with the stars, adding another layer of life to this bountiful woodland.

As I star-gazed, I heard a Swainson's thrush singing in this woodland, too, reminiscent of my early morning wake-up call to hit the trail. Its haunting flute-like tones wafted through the tall trees reminding me of an earlier time when the First People referred to this handsome thrush as the 'salmonberry bird.' Its arrival here each spring coincides with the ripening of salmonberry (Rubus spectabilis) fruit. Sure enough, along the forest's edge, bright red berries adorned the verdant shrubs intermingled with another common plant of this realm, thimbleberry. 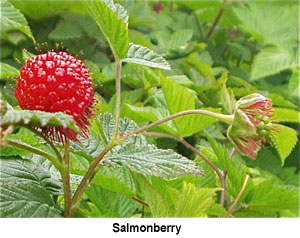 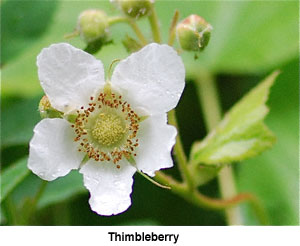 The broad maple-like leaves of thimbleberry (Rubus parviflorus) are perfect to show off splendid creamy white blooms, with a texture likened to crepe paper. Classic botanist Leslie Haskin wrote that its form reminded him of "...an extremely fragile wild rose." To me, it seems always to be beckoning the bumblebees and butterflies. Soon, the succulent berries will be a bonanza for birds and mammals. The Coast Salish who harvested the berries for winter stores and made tea from the velvety leaves used the plant extensively. Two delicate white beauties of the saxifrage family, fringecup and foamflower, were in bloom nearby, as well.

As I continued to investigate the scene, another unmistakable bird song punctuated the air. It was the sharp "quick-three beers" command of the olive-sided flycatcher, a spring and summer resident here. Its call has been variously interpreted as "come right here," "what peeves you," and, by Thoreau, as "till, till, till." No matter the phonetics, one usually knows when this flycatcher is near. Adorned in modest gray plumage, it often alights conspicuously atop snags: a fine vantage point for perch-hunting insects flying by. Its kin, the Pacific-slope flycatcher, lives here too, if more discreetly. On this day, it repeatedly emitted a strong "su-wheet" call note that eventually gave away its location in a nearby madrone.

Down the way, the simple, mournful trill of an orange-crowned warbler caught my ear. It is an active little bird whose olive-green plumage provides perfect camouflage as it darts through the evergreens usually keeping one step ahead of me – even with binoculars. The orange-crowned is one of the first warblers to arrive each spring, sometimes heard trilling in the trees in mid-March.

One other bird song here – not as audacious as the others – was easily definable by me after years of walking these woods. It was the brown creepers' thin, reedy, high-pitched "see" note call. It did not take long to spot the tiny, cryptic bird busily flitting about the forest, using its delicate down-curved bill to extract minute insects, insect eggs, and spiders from crevices in the bark of mature firs. The brownish bird, with white throat and breast, spiraled upward around a tree trunk, then swooped down to the base of another fir and repeated the process. This foraging behavior went on for several minutes until its shy nature led the creeper deep into the woods. The gnarled bark of the trees, rife with insects, has another advantage for the creeper. The dense outer layers of wood loosen with age and pull away from the trunks of the trees providing perfect niches for the creepers to fashion primitive nests well out of sight of predators. Four creepers were busily foraging this day, and I wondered if they might have been a newly fledged family making their living in the sepia shadows of the woods. 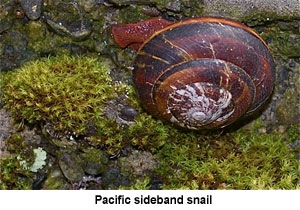 I walked a short way down the trail looking and listening for more treasures. Salal (Gaultheria shallon) was in bloom: perfect pinkish-white lanterns were poised along the hairy reddish branches of the plant in perfect symmetry to catch the modest rays of sunlight that penetrated this canopied world. Later there will be lush, deep purple fruit that befriends many forest dwellers including spotted towhees and, occasionally, California quail.

A little farther down the path, near the shore, I found broad-leaved stonecrop (Sedum spathulifolium) blooming in the crevices of island bedrock. The succulent yellow flowers are a beacon for spring azure butterflies that flutter through this realm.

Further exploration was rewarded when I found a beautiful little shell – shaped like a nautilus - along the trail. It rested on pincushions of chartreuse moss shaded by the boughs of a downed red cedar. This was the Pacific sideband snail (Monadenia fidelis) one of only a handful of native land mollusks found in the islands. The shell was nearly two inches across with black, burgundy and rich golden rings swirling about its pearly carapace. Its soft purplish-red body was barely visible tucked inside the case. These snails feed on algae and rotten plant material and live in moist forests that extend from British Columbia to California. I had seen "Mona" here before – always in the moist spring - but finding it again was a great pleasure. Looking through the duff, I also found a banana slug. The lemony yellow gastropod seemed vulnerable without the protective shell of Monadenia. The lack of a shell is one of the differences between slugs and snails. While often maligned, our native slugs and snails are actually important recyclers in the forest munching on woody debris, cones, fungi, and such. 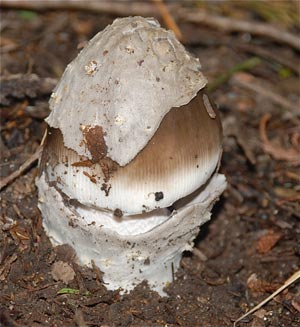 Just a few more steps down the trail I uncovered a beautiful mushroom just emerging from the duff. I did not know its name, but I was impressed with its robust appearance and I wondered if Monadenia would find its way to this treasure. Before I left, I snapped a few photographs of the striking mollusk. Every sideband snail I have encountered has displayed a distinctive coloration and slightly different configuration of the bands for which it was named. Each subtle variation in the shell demonstrates "Mona's" adaptive nature in the Northwest woods.

It may seem silly to get sidetracked by a snail, but I have been fascinated with the Pacific sideband for many years. I find its intricate whorled design one more example of the perfection of Nature in all its forms, and when I understood the snails' important role as a recycler of the woods, I cheerfully added its functionality to my equation of delight.

With this discovery, my walk in the woods ended for another day. Had I stayed with my original plan – to take a longer walk – I would likely have seen and heard nearly all that I encountered by staying a spell in one spot and watching forest life unfold in front of me. But I might not have taken the time to ponder the details of the lives of these plants and animals. From the rufous hummingbird that supped on honeysuckle and the brown creeper's attachment to mature conifers, to the thrushes affinity for ripe salmonberries and the snail's sometimes close association with fungi, the experience was a reminder that all wild things live in community with differing degrees of dependence upon one another. The adage that all creatures are connected and have their rightful place in the world certainly holds true here.

SAN JUAN NATURE NOTEBOOK / A WALK IN THE WOODS / Text and photographs copyright 2010 by Susan Vernon. No part of this column may be reproduced in any media or form without the expressed written permission of Susan Vernon. All rights reserved.