Fall is in the air. By six o'clock, the sun is in the last phase of its slow deliberate descent toward the western rim of the inland sea, and the sky chills to a cool wash of aquamarine. Along island trails, bigleaf maples have begun their process of winterization; the ground beneath their massive frames is crowded with piles of orange and yellow leaves.

Putting together with light

One of the pleasures of fall is watching the leaves change color. The maples (Acer macrophyllum) carpet the trails with huge five-lobed leaves that fall gracefully from the arms of the moss-laden trees. I know a place on the west side of San Juan Island where the maples remain relatively undisturbed and I stopped there recently to examine the jumble of green, red, and yellow leaves. Each leaf displays its own unique pattern of receding and emerging colors as its chlorophyll-laced cells, which have for months given off a rich, dark green patina, break down revealing the yellow and orange pigments that have been there all along. 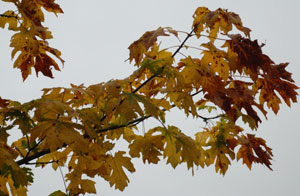 The photosynthetic process of "putting together with light" is compromised as fall approaches. The days shorten, temperatures drop; the light fades; and the chlorophyll is replaced at an increasingly slower rate until it is gone. The food producing days of the leaves come to an end.

The maples prepare for winter by shedding their leaves. A special layer of cells develop at the point where the stem of the leaf is attached to the branch; these cells sever the tissues that support the leaf, and it falls to the ground. One can see the leaf scars where the trees heal their wounds. The bigleaf maples are going into a state of dormancy, having stored enough sugar to last until spring when warmer temperatures and increased daylight will reactivate the process. Other deciduous trees in the island – among them alders, willows, poplars, oaks, cottonwoods, and aspens – have their own timetables for making this transition but, for me, it is the bigleaf maples that symbolize the change of seasons.

In the maples and other trees, along with resident dark-eyed juncos, chestnut-backed chickadees, red-breasted nuthatches, and golden-crowned kinglet, I find late flocks of yellow-rumped warblers, sometimes accompanied by Townsend's warblers, black-throated gray warblers, and ruby-crowned kinglets. Some of these birds are among the last of our summer breeders to depart the island for warmer climates, while others are late migrants from farther north also moving steadily south. The tiny birds forage voraciously in the foliage, picking insects off the leaves that are still attached to the trees. The yellow rumps perch hunt from the alders. The little clouds of brightly colored birds are easy to spot as their feeding is accompanied by loud vocalizations that are a way of keeping the flock intact as they work their way south. 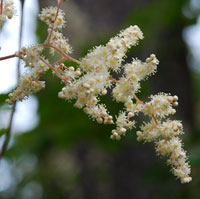 Nestled among the maples, alders and madrones is a species of shrub common to most of us but often overlooked as an important food source for birds. It is ocean spray (Holodiscus discolor) a fine plant that, perhaps more than most, feeds the small birds on their journeys north and south, and sustains our residents during cold and wet winters. Many islanders regard ocean spray as an unsightly shrub in the fall and winter as its flower clusters transform from lustrous creamy-white to a more subtle earthen brown; some folks endeavor to rid it from their gardens assuming it has no value. In reality, ocean spray is not only a prolific seed-bearer, host to multitudes of tiny insects that feed warblers and other song birds, and nesting site for bushtits, but its flowers are an important nectar source for butterflies such as Lorquin's Admiral and Pale Swallowtails.

I was reminded recently of just how valuable ocean spray can be when a yellow-rumped warbler – heading south – got caught on the island during a stretch of wet, cold, and windy weather. The little warbler - an immature - hung out in a patch of ocean spray just off my deck for two days gleaning insects from the plant, and seeking shelter from the rain in its maze of dense foliage. So I have been told, ocean spray can be pruned in such a manner as to be a fine addition to many an island garden. Spread the word. 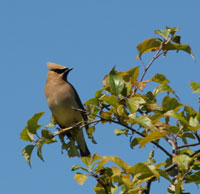 Another late migrant – the cedar waxwing - takes particular pleasure in an often times overlooked small tree: Pacific crab apple (Malus fusca). This October, I watched a flock of two dozen waxwings strip a small crab apple tree in less than two days before moving on. What fruit they left behind was quickly devoured by robins.

The Pacific madrones (Arbutus menziesii) are in fruit, as well, and magnets for birds. In the fall, their branches are literally weighed down with large clusters of grainy, orangish-red fruit that are coveted by winter residents including robins and varied thrushes that descend upon them by the hundreds. Listen carefully, and you might hear the haunting song of the varied thrush – a short, single-pitched hum that floats wistfully through the trees and is repeated often when the thrush pauses to rest after one of its bombastic bouts of foraging. 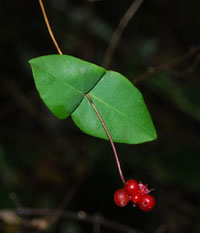 This time of year, the vines of summer fruit-bearing plants are entwined among the shedding shrubs and trees. The hairy honeysuckle (Lonicera hispidula) is my favorite; both a climber and a creeper, its slender stalks wind through the understory with tiny, bright red berries still clinging in clusters to the stems. 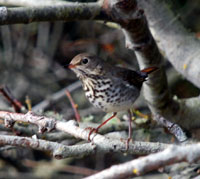 This fruit is a favorite of hermit thrushes usually secretive little birds that now cast their shyness aside to pluck the last of the sugary beads from the vines. Another favorite of the hermit thrushes is evergreen huckleberry that has become popular with gardeners here in the islands. The little hermit thrushes love the purple berries and appear to return year after year to some gardens in the hope of scoring the precious fruit.

With the days darkening, the winds kicking up, and temperatures plummeting, it may be easy to forget that there are still a few summer migrants passing through the islands. We take for granted that these stragglers have enough food to sustain them on their journeys south, but with decreasing habitat due to development, it becomes more important than ever to think twice before taking out your ocean spray, cutting down that old crab apple tree or alder, or spraying a thicket of blackberry.

The birds count on these trees and shrubs for food and for shelter, and if they arrive at a traditionally important location here in the islands to find their favored food source has disappeared, it makes it that much harder for them to continue their journeys. All the birds are, of course, not going to make it, but we can increase their odds by leaving fruit on the vines, resisting the temptation to entirely park out our properties, and even planting shrubs like evergreen huckleberry in our gardens to encourage these migrants and winter residents to stop and refuel before they move on.

SAN JUAN NATURE NOTEBOOK / FALL Text and photographs copyright 2008 by Susan Vernon. All rights reserved. No part of this column may be reproduced without the expressed written consent of the author.