October was waning, and I took advantage of one of those glorious warm afternoons to head for American Camp looking for late migrating birds and butterflies. Early fall often holds surprises and I remembered three years before encountering the movement of dozens of red admiral butterflies through the park fluttering straight and strong just above the prairie grass headed, presumably, for the warmth of southern climes. I had hoped to encounter a similar event this fall but it was not to be. I found solace near the Redoubt watching newly arrived meadowlarks and northern shrikes while a female northern harrier earnestly prowled above the plain. The loud cricket chorus of September was gone; only a few individuals lingered to carol a red fox trotting through the tall grass. 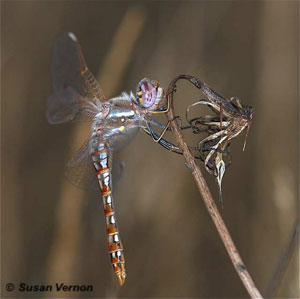 A dragonfly zoomed into view. Its elegant, red needlelike body darted methodically through the soft air pursuing tiny bugs before it whirred out of sight over the ridge. It was a male variegated meadowhawk, one of many species of dragonflies that occur in western Washington, nurtured in and living most of their lives near wetlands. Weeks before, I had witnessed a spectacular natural phenomenon along this same stretch of prairie. Now the lone red dragonfly had great significance to me.

On September 2, fall migration was in full swing. Late in the day, I drove to the south end of the island looking for pipits and horned larks. It was six o'clock. The sun was still relatively high in the pale blue sky scattered with high cirrus clouds. There was only the hint of an easterly breeze moving across Haro Strait. Sunset was two hours away.

As I drove over the rise on Pickett's Lane I noticed dragonflies pass in front of my car. Several yards down the road more of the dark slender forms sped past. The numbers surprised me. I stopped for a closer look. It took only a few moments to realize that dozens, then hundreds, of dragonflies were speeding, in loose formation, across the prairie heading south. I had come upon a migration event. The surge was impressive - the second time I had witnessed dragonflies on the move. I literally leapt into action to document the passage. The dragons - only about two inches long - were flying low and fast just above the grass. There was no way to count all the individuals going through, so I marked off several sections of split rail fence to give me reference points and began counting the dragons that crossed within that boundary.

In one minute, 100 dragons flew across the fence line: in five minutes, over 500. At the half hour mark, several thousand dragonflies had sped past me. I took a break to gain perspective and judge the magnitude of the event. I drove the length of Pickett's Lane as the steady stream continued. There were dragonflies as far as I could see from the beach to Redoubt Road. The numbers were staggering. 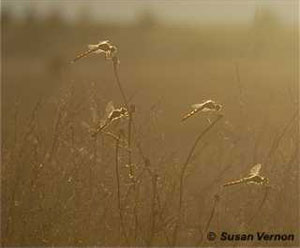 Time hurtled by as quickly as the dragonflies. I went back to my original vantage point and kept counting. I took another short break to fetch a colleague who lived nearby knowing he would want to see this spectacle, too. After nearly two hours, clouds gathered and dusk began descending over the prairie.

By 7:50, the last rays of sun were losing their sheen. As a few dragons continued passing through, I watched dozens more drop into the grass choosing hairy cat's ear, an aster considered by many an invasive weed, as their roosting site for the night. Sometimes, three or four dragonflies gathered on the same plant, grasping the stems with their minute steel-blue legs. As a golden afterglow settled across the plain, the weary migrants succumbed to the evening chill and were still. They appeared vulnerable, but darkness would protect them from predatory birds that were a threat during the day. In the last spray of light, the dragons' delicate multi-colored bodies and clear outspread wings glistened like gold in the grass. The unexpected gathering seemed like a grand illusion. 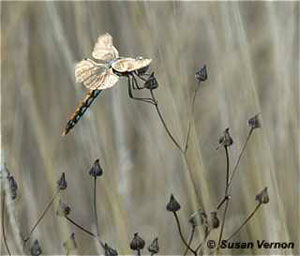 Just before darkness obliterated my view, I spied a single ochre ringlet butterfly - a resident of American Camp - also roosting in the grass, a fitting reminder that the dragons were not alone on the plain.

The sky turned midnight blue except for a blazing red wash that hung over Haro Strait just long enough to punctuate the end of the day. The cricket chorus dimmed as the dragons slept, the little ringlet held fast to its perch, and, reluctantly, I headed back to town.

At home, I downloaded photographs, transcribed field notes, and took Dennis Paulson's early work, Dragonflies of Washington from the shelf to identify the species I had seen. Dragonflies are members of the order Odonata, and are called "odonates." In Greek that means "the toothed ones" although the dragons don't have teeth, rather strong mandibles with which to grasp their prey. The medium-sized dragons I observed displayed an intricate pattern of colors and markings. Dark segmented abdomens of black, white, yellow, burnt orange, and blue perfectly adorned them for the flight of their lives. Some individuals appeared predominately red. I found a photograph of variegated meadowhawks (Sympetrum corruptum) and a species description in Paulson's book. That was it. I set the alarm for 5:00 a.m. wanting to watch the dragons awaken and continue their journey. I estimated that over 80,000 variegated meadowhawks migrated through the park that afternoon. Images of the swarm of intriguing insects swirled in my head as I fell asleep. 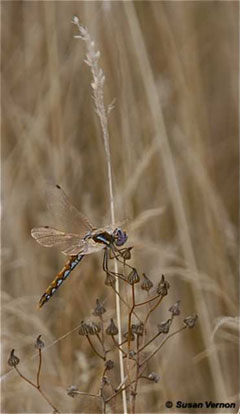 The next morning, I arrived at American Camp before 6 o'clock. It was still dark but a small flock of savannah sparrows were already foraging for insects along the roadside. Pink and blue light hovered over the Olympics. Thirty minutes later the fields began to take on a golden hue as I caught a glimpse of a fat black fox chasing a rabbit into its warren 100 yards away. I found the dragons still clinging to hairy cat's ear and other plants. While the chill quickly dissipated, it was still too cold for them to fly. I watched and waited for the awakening. At 7:12 the dragons began to stir. Their bodies trembled slightly as they warmed up.

Then, the four wings of a sleek little traveler began to whir and the first lift-off came at 7:17. By 7:30, several of the hawks were airborne just as the sun rose over Cape San Juan. The first order of the day appeared to be refueling before continuing their journey. Dozens of dragons emerged from the grass. They hunted, rested, basked in the sunlight, and then, one by one, headed out. By 9:00, most of the meadowhawks were gone.

In the days that followed, I searched the Internet for information about dragonfly migration. On September 7, the headlines in Oregon newspapers read: "Dragonflies Swarm Cannon Beach" and "Mass Flights of Dragonflies Create Awe on Oregon Coast." From the Tweeters Birding E-mail site I learned that hordes of dragonflies had descended on Tokeland, Washington the same day I saw them on San Juan. And they had been sighted in the vicinity of the Olympic Mountains as well. Some guessed million of meadowhawks had been seen; biologists set the estimate more likely at hundreds of thousands. Either way, the migration along the Washington and Oregon coastline had been a true phenomenon.

I contacted noted dragonfly expert and author Dr. Dennis Paulson, director emeritus of the University of Puget Sound's Slater Museum of Natural History. He explained that the variegated meadowhawk - one of only a few dragonflies to undertake long-distance migrations - were headed for California and northern Mexico. They were coming from their breeding grounds to the north, in British Columbia. The species is also widespread in the southern part of the Canadian Prairie Provinces, but those individuals may have migrated east of the Rockies. The regional meadowhawks' migration had previously been observed mostly along the outer coast of Washington and Oregon. Paulson reported: "The 2010 movement appeared to be more widespread. Observers saw very large flights in the Pasayten wilderness and right out of the Columbia Basin. It was really quite amazing, far more than I have ever heard of before. Or is it just that more and more people are keyed in to look for them?" Dennis explained that once the meadowhawks get to their destination they would lay eggs and die leaving their offspring to migrate north again in the spring where the cycle of life will continue.

Paulson was especially pleased to hear of the meadowhawks appearance in the San Juan Islands. It was the first documented sighting in this area. There is still much to understand about the mysterious movements of the meadowhawks. They may appear along the outer coast one day and disappear the next. No one is sure where they go. Easterly winds may have been a factor in pushing them inland to the San Juans. Dennis concluded: "The meadowhawks are beautiful dragonflies, not fully appreciated because most people only see them from a distance." 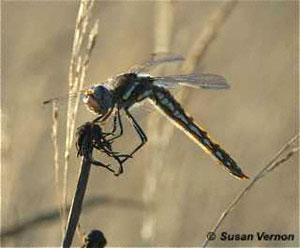 I continued to haunt the tall grass prairie at American Camp for the rest of September looking for more dragons. On the 14th, I encountered another surge in late afternoon. This time easily twenty thousand dragonflies passed through within two hours. By 7:00 p.m., it began to rain, and it poured all night. The next day they were gone, but every day thereafter, throughout September, I found at least a few of the variegated meadowhawks at the south end of the island. Usually, they were hunting; sometimes basking on rocks along the trail. On one occasion, I saw meadowhawks mating, data important to biologists who are still learning about their behavior during migration.

I was out of commission for most of October. Finally, I got back to American Camp and found three stragglers one day, two the next, and then finally the lone red meadowhawk I saw on October 28.

I was sorry to see these marvelous creatures - ancient insects that have lived on earth for nearly 300 million years - leave. Fossil remains tell us that, long ago, dragonflies had wingspans of nearly three feet. In Asia and the Americas, dragonflies are considered symbols of good luck although folklore about "eye pokers" and "the devil's darning needle" still resonates with some folks. Some Native Americans consider them messengers of wisdom and symbols of change. Long ago in Europe and Australia, they were more often demonized.

My experience was the meadowhawks was exhilarating, made richer by Dennis Paulson's generosity in sharing his considerable knowledge and photographs and encouraging my curiosity. Paulson's newest book Dragonflies and Damselflies of the West is a superb reference on the subject.

Now, with winter close at hand, it is time to turn my attention to swans, snow buntings, and short-eared owls. But there will still be time to ponder the meadowhawks. Was this the first time the dragons migrated through the San Juans or have they been passing through, unnoticed, for decades or even centuries? Where do they go when they disappear for days at a time during their journeys south? How are changing landscapes and changing climate affecting their movements and their populations? What role does our prairie play in sustaining them and the predators that prey upon them? These strikingly beautiful animals have a role to play in the web of life of the archipelago, as elsewhere. Hopefully, in the years ahead, I will see these glittering, beguiling creatures pass this way again. I suspect we have a lot to learn from them.

SAN JUAN NATURE NOTEBOOK / LONG DISTANCE DRAGONS copyright 2010 by Susan Vernon. All rights reserved. No portion of this column - text or photographs - may be reproduced without the expressed written consent of the author.