The gray days of winter

were almost gone. Or so I thought. The third week in February, I was almost sorry, in some ways, to see them end. My favorite trails had taken on an added dimension as tiny green shoots began sprouting from shrubs along the way. Green promise became the reality of blooming red-flowering currant and Indian plum. At English Camp, patches of salmonberry had been in bloom for two weeks. While the magenta petals of Rubus spectabilis were a joyful sight, still I felt a twinge of sadness at the waning of this austere season. It was almost time to bid adieu to the many birds that arrived here last fall seeking winter refuge among the evergreens, on freshwater lakes and tall grass prairies, and along the shorelines of the archipelago. Soon enough the visitors would head back to their nesting grounds to the north and east. I would be sorry to see them go. 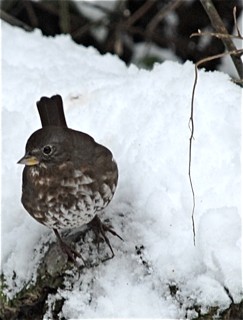 And, then it snowed and the icy cold nights that followed left me worried about the smaller birds and how they would manage in this unexpected storm. Three days past the snowfall, our resilient feathered friends – so well adapted to deal with challenges - seem to have done fine. Now, perhaps, we can move on to a reacquaintance with the sun, but not before acknowledging our winter visitors' time here. 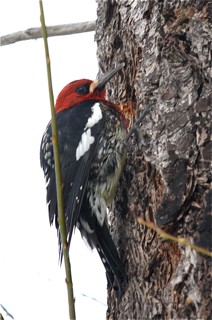 Last September, I was cheered by the red-breasted sapsuckers that appeared first as migrants passing through and later as winter visitors that settled quietly in and near our orchards foraging on the soft wood of ancient fruit trees or gleaning bugs from beneath the bark of conifers. I love the redheaded orchard birds' quiet demeanor – and their predictability. There are certain trees on San Juan Island that I count on to host the sapsuckers each winter and the birds never fail to return – generation after generation.

In late October, the trumpeter swans began arriving to take up residence in our wetlands. Islanders got good views of North America's largest species of waterfowl this year at Lakedale, Sportsman's Lake, and Egg Lake among other sites. I enjoyed watching an extended family of swans making its daily rounds in San Juan Valley from ponds and flooded fields to grazing sites on grassy knolls. Many of the sixty or so trumpeters that overwintered on this island have gathered now in the valley in preparation for their return to the far north – possibly the Tetlin National Wildlife Refuge in the Alaskan interior. Look for most of the swans to leave around the spring equinox in late March.

Another delight for me has been observing a short-eared owl. In years past, I have seen five or six owls overwinter in the same area, but this time I found only one. It took up residence at the south end of the island and, in December and early January, hunted in the tall grass each evening. I often sat for an hour before dusk watching northern harriers (marsh hawks) cruise the plains before retiring just as the robust short-eared owl appeared. The silent hunter – bedecked in a feathered cloak that appeared to shine silver against the twilight sky – flew low over the prairie, listening and watching for its prey and wheeling into the grass three or four times each minute grasping for tiny voles and mice. Once the earnest owl alighted on a fence post nearby, not having seen me sitting by the rail. The close encounter was a surprise to both of us. The owl did not stay long, but time enough for me to admire its golden eyes, just the hint of short ear-tufts, and a richly dappled back of bronze and buff to compliment its streaky breast. After a long penetrating gaze, the prairie owl lifted off the post and floated away without a sound.

Sometimes while I waited for the owl to appear, I caught glimpses of a northern shrike, another winter visitor to our open spaces. Like the owls in years past, I had grown accustomed to seeing several shrikes on the plains, but their numbers seem to have dwindled. Still, these “songbirds of prey” (as noted in Birds of America, 1917) are thrilling to behold: a small bird with a wing span just over a foot, steely bluish-gray and white plumage, black wings and tail, and a narrow black mask that appears to shade dark eyes intent on spying food in every grassy nook of the plain. Shrikes are perch hunters often using large elderberry bushes as vantage points and launching sites for their aerial forays against smaller birds.

On January 26th – a calm, unexpectedly mild day - the sun shone through the parting clouds about 3:30 revealing a mourning cloak butterfly erupting from the same tall grass so frequently haunted by the shrike. While I was startled by its appearance, it wasn't much of a surprise as old cloaks - looking like tiny pieces of burnt bark– over-winter here, too – often taking advantage of even short sun breaks to emerge and flutter momentarily about the landscape.

In the waters off South Beach, more over-winterers can be found. Surf scoters, eared grebes, red-necked grebes and red-breasted mergansers gather with the gulls just offshore. Pacific and common loons – regal even in their drab winter garb - patiently patrol the nearshore, and pigeon guillemots, in their winter whites, auklets and marbled murrelets mine the depths for those silvery schools of fish that sustain them into spring.

At False Bay, I often found shorebirds among the Mew, Thayer's and glaucous-winged gulls and hundred of waterfowl that congregate there each winter. Black oystercatchers (year 'round residents here) shared the sand, mud and cobbled beach with greater yellowlegs – grand stilted tattlers - and a beautiful little shorebird called dunlin. One day I watched over thirty dunlins wheel just off the beach, their pewter wings acting as scythes as they danced in the dense air.

On that same day, I caught my breath as a bald eagle plucked an American wigeon from a huge flock of northern pintails, green-winged teal, and gadwalls that were resting upon the rippled water not far from the dunlins. It is always a bit shocking to see these natural dramas unfold, but also reassuring to know that the web of life here is still sustaining our vast array of birds. Other wintering waterfowl including northern shovelers and ring-necked ducks preferred the relative seclusion of freshwater ponds elsewhere on the island. At Westside Lake, by Limekiln, twenty common mergansers overwintered quietly in the serene shadow of Mt. Dallas. The lake is a gem of seclusion for waterfowl, including the swans, that need its undisturbed nooks and crannies to feel safe.

While counting the mergansers from a faraway vantage point, I listened to tiny ruby-crowned kinglets calling “si, si, si” from the thickets; spied golden-crowned sparrows sighing "oh dear me" from the shelter of blackberry brambles; admired varied thrushes foraging on the last salal berries; and took note of our year-round resident chickadees, juncos, nuthatches, siskins, creepers, towhees, and wrens making their livings in this dark and drippy winter world. Only the fox sparrows were missing from the scene but I knew they were nearby, as well, having sought out the San Juans in their off season.

It has been a La Nina winter starting out with abundant rain in the fall giving way to periods of colder temperatures that had some of our feathered friends – like the resident Anna's Hummingbirds - heading straight for bird feeders to get them through the harshest times. But, it was never so cold that the low-slung sun did not beckon my touchstone of winter here – the western meadowlark. 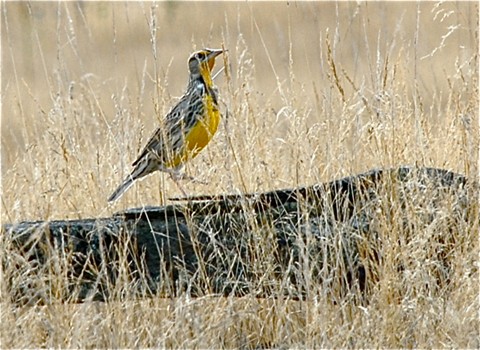 When the gray days seemed a bit overwhelming, I headed for American Camp where the larks were waiting out winter, too. They began arriving here in September and will likely depart in late March and April. During the darkest months of the year, the dapper brown birds with the shining yellow breasts can be counted upon to brighten the landscape with their intricate songs rather like a chorus of whistles and flutes emitted in a jumble of liquid chatter. The little clans of larks retreat into the tall grass but seem eager to sing at the slightest hint of clearing skies. It is always a joyful awakening – their exuberant songs exploding out of the rough and ricocheting off the glacial erratics. The big boulders make good perches during the calm moments when a winter meditation on sea and sky seems such a natural expression of the larks' high-spirited souls.

There is still time to pay your respects to the meadowlarks and to the other hardy birds that depend on the San Juan Islands as their winter refuge. While islanders have been staying dry and warm indoors, the birds found relative safety in the parks, preserves, natural areas, and even back yards that provided the resources they needed to survive this harshest time of year. I suspect, as the days grow longer and brighter, their hearts may sense the awakenings of spring – as do ours. The genetic imperative will guide the travelers back to their natal lands. And while I shall miss them, I will be wishing them a safe journey home.

SAN JUAN NATURE NOTEBOOK – BIDDING ADIEU TO WINTER. Copyright 2011 by Susan Vernon. No portion of this column – text or photographs – may be reproduced in any form without the expressed written permission of Susan Vernon.