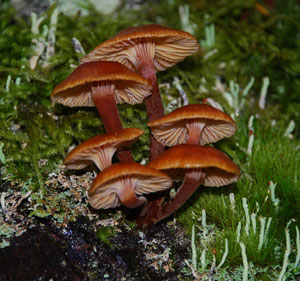 October may have come and gone on a warm breeze but now, in November, the rain and wind have commenced and, accompanied by graying skies and erratic winds, any lingering dreams of an endless summer have been washed away. The days proceed in a jumble of showers and light, and it is the rain that brings the next phase of discoveries for this island year.

While walking in the woods after one of the first hard rains, I noticed mushrooms emerging through the spiny duff of russet-colored needles let loose by firs, hemlocks, cedars, and pines. With no appetite for fungi, finding the first robust cryptogams reminded me instead of the diverse biological components that make up a forest.

Mushrooms are enigmatic organisms: neither plants nor animals. They have a niche of their own as part of the Kingdom of Fungi that includes mushrooms, molds, and lichens. They are vitally important to the cycles of life in the woods - as elsewhere.

Mushrooms are the great recyclers. Because fungi lack chlorophyll for food production, they must live on other organic material in the forest; they break down the cellulose and lignin that are the main components of wood and other plant parts. Without fungi and bacteria to do the initial groundbreaking work of decomposition, other forest dwellers, from the wood-boring insects to the wood-pecking birds, would get no chance to partake of the broad spectrum of food that is available in this multi-layered matrix of vegetation.

Here on our conifer clad islands literally hundreds, if not thousands, of species of fungi inhabit the woods living on one of two basic associations with the trees and shrubs; either as saprophytes or mycorrhizal associates.

The saprophytes are the decomposers living off the forests' dead and dying debris. Most species are specialists feeding upon a certain type of organic material including cones, needles, leaves, logs, and even dung. The mycorrhizal associates are the mutualists forming a life-long relationship with plants both giving and receiving nutrients essential to survival. 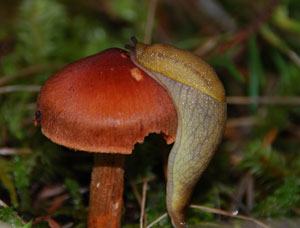 I've done my share of mushroom classes over the years, first going out with mycologist Dr. Fred Rhoades of Western Washington University who comes to the islands to teach for the San Juan Nature Institute. One fine October morning, we shuffled through piles of golden leaves and scanned mixed woodlands unearthing mushrooms at every turn. We found honey mushrooms with rich-colored caps and fine, white etchings along their margins snuggled under the leaves and logs; buff-colored anise mushrooms with their unmistakable scent; delicious milky caps; and purple-cloaked woodland russula that prompted a satisfying sign from some members of the class who were more interested in the gastronomic aspects of fungi than in their biological importance to the woods.

Along the way, we passed several species of LBMs - "little brown mushrooms" - hidden among the leaves and emerging from the mosses; they were delicate and, in some cases, deadly. When we saw an especially beautiful crimson specimen with a slug clinging to it, Fred pointed out that just because the slugs eat it, doesn't mean the mushroom is not poisonous to us.

Just as I was about to bolt from this gastronomic scavenger hunt, I made a delightful discovery. I picked up a small lichen-covered twig and, looking closely at its form, found several tiny goblet-shaped fungi no more than 1 cm across, growing on the bark. Each one was filled with half a dozen or so minuscule black "eggs," thus its name, bird's nest fungi (Nidula candida). 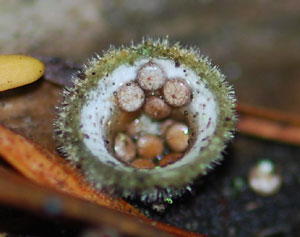 This fungus is designed for spore distribution in an intriguing manner. The nest is, at first, encapsulated - the spores grown inside the "eggs" called peridioles. When the time is right, the top of the nest falls away exposing the eggs. Then, when it rains, the water hits the cup and the peridioles are literally splashed out onto the ground.

Small animals eat the vegetation, and also the eggs, which contain multitudes of spores. These spores travel unmolested through the animal's digestive system and are "dispersed" sometimes far away from the parent plant by this host. What a marvelous invention of nature! 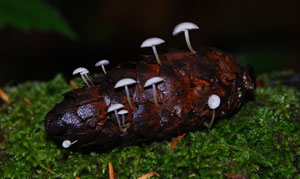 The next day, I was fortunate to go out alone with Fred, and we concentrated on forest ecology rather than gastronomy, finding examples of the two main categories of mushrooms: the decomposers and the mutualists. We had gone only a few feet along a trail that wound through a mature woodland when he bent down, brushed away the duff and found a beautiful little white fungus growing out of the folds of a Douglas-fir cone. Its tiny cap was paper thin, nearly translucent – like a little white sprit perched on the cone. "Cone lover," he said, "in the shadow of this fir. This is the only place it grows, working over time to decompose this cone."

A few steps farther down the trail, Fred stopped again. "Look at these little Mycenas," he said, pointing out a gathering of tiny, delicate fungi with cone-shaped caps. "They are decomposers, too." Fred pushed aside the litter, digging deep enough in the soil to see they were growing on fir needles. He peeled the needles away. "See the base of the mushroom here," he pointed out.

As we moved through the duff, Fred explained more about Mycenas. "It's a big genus. There are probably sixty local species and many must be identified microscopically. Some are really beautiful; here's a group where the gill edges are the same color as the cap; and a different little group – a gray one that doesn't have a colored edge. Oh, and this one has a little reddish edge," he pointed out while looking through his loupe. Under magnification, the cap of the little Mycena looked like a parasol designed, I presumed, to keep rainwater off the spores.

Fred's bright blue eyes sparkled behind his wire-rimmed glasses as he examined each new species of mushroom along the trail. He carefully made notes on his San Juan Island checklist as we settled down in the duff to look more closely at little groups of fungi going about their business of decomposition, one needle at a time.

It was a great morning of discovery. We moved on from the Mycenas to larger decomposers: a stout white mushroom with a suede cap growing at the base of a fir - Leucopaxillus; a smaller white with a slightly scaly, graying cap and a prominent ring around its stem – the western flat top - was less imposing.

Then we found a woodland russula. It is a robust mushroom with a deep purple cap five inches across, creamy white gills, a royal countenance, and beautiful. (Photo 6 –MRB russula 01)

"This is an example of the other category of mushroom – the mutualist," Fred instructed. "There are many color variations. The maroonish cap is characteristic. If it has a pink blush on the stem, ochre spores, and a crabby odor, it is a woodland russula."

Fred used a small hand rake to brush away a thin layer of soil under the duff. "Yes, here are the roots coming along – probably a fir; highly branched and not very deep. On the side of it, you get the development of these puffy short side branches, so you have the russula feeding and being sustained by the fir, and visa versa. Neither of these organisms could survive without the other."

As we walked along, Fred continued to identify species: Clitocybes with decurrent gills and white spores – little decomposers; and more cone lovers and russulas. "Here's our old friend the honey mushroom," Fred pointed out. Down by a creek, I found a lichen-covered branch with dozens of thumbnail- sized fungi growing on its bark. They were zoned in purple, pink and green with soft-scalloped edges, and slightly slimy in the center. Fred told me they were pore fungus. They decomposed aspects of wood cells. 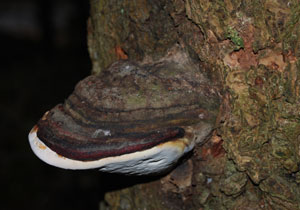 As we headed back up the trail, we came upon an old snag that had a shelf-like fungus growing on its trunk. The top of the dead tree had broken off in a windstorm and lay crumbled like a carcass by the side of the road. "That's a red belt fungus," Fred pronounced. "This snag has been dead for some years. You can see the characteristic brown cubicle rot it (the fungus) caused among the growth rings."

That old snag had fascinated me for years. On my frequent walks along this trail, I had watched pileated woodpeckers chipping away at the broken frame looking for wood beetles and such – doing their part in the decomposition process, too.

The time spent with Dr. Rhoades was an eye-opener for me, and while some time has passed since my initial education in mycology, I have not forgotten the lessons I learned from him, or the enthusiasm with which he undertook both his teaching and his studies. He introduced me to an entirely new level of "connectedness" in the natural world that I may not have found on my own. 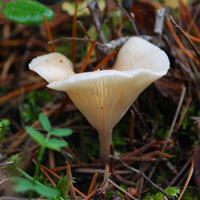 Yesterday, after a hard rain, I returned to the forest trail Fred and I had walked some time ago. Looking about the woods, my gaze quickly adjusted to this micro world of fungi, and I saw dozens of mushrooms in the duff all continuing to do their jobs decomposing the leaf litter around the big conifers. The forest was continuing to recycle before my eyes. I would like to be able to report that I heard the raucous "Kuk,kuk, kuk" admonition of a pileated woodpecker still working on that old downed snag, but alas I did not. But, true to form – and function - I knew that hardy big bird was probably nearby, continuing to do its job as a forest recycler, too.

Note: With the recent and on-going rain, it is still a great time to find many species of mushrooms. The trails at English Camp, Limekiln Point State Park, and Jakle's Lagoon, among others, offer wonderful opportunities to see these recyclers at work.

San Juan Nature Notebook / Recycling the Woods, text and photographs copyright 2008 by Susan Vernon. No part of this column may be reproduced, except for personal reference, without the expressed written consent of the author.