The San Juan Islands are a wonderful place to find spring wildflowers. The post-glacial till of south-facing slopes and variety of forest and wetland habitats promote high diversity here and wide-ranging opportunities for plant lovers seeking their favorite blooms.

With spring just around the corner and our warm winter weather a predictor, perhaps, of early blooming wild flowers and plants, I took to the trail recently in search of signs that a new season was at hand. 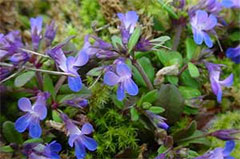 The last week of February a friend and I drove to the west side of San Juan Island where we found one of the first blooming wild plants -- a gem called satin-flower (Sisyrinchium douglasii). A single pinkish-purple flower was poised on a south-facing slope above the inland sea not far from Lime Kiln. It trembled slightly in the breeze and cast a soft sheen upon the monotone scape. The satin flower is a relatively rare find in the islands, often in bloom by mid-February. Luckily it is seldom disturbed as the little purple-eyed grass goes out of bloom before most wildflower lovers have taken to the trail. Predation by deer is another matter.

Farther up the road Indian-plum were just beginning to emerge, its delicate white flowers suspended in clusters from leaf axils in a showy display that meant spring was surely at hand. I smiled and gave a nod of thanks and remembrance to Doris Blinks who introduced some of us to this fine plant. Nearby, the first small magenta blossoms of salmonberry were beginning to appear.

At the Labs, a red-flowering currant exploded into bursts of rich, pink flowers; more plants would bloom before February waned. Could the rufous hummingbirds be far behind? The minute greenish-yellow stars of soopollalie were close by, too, twinkling along the side of the road.

Last week, I revisited the Labs and found the first white fawn lilies. There were two flowers in bloom and a third in bud on a rocky knoll. I returned on Sunday and found three more buds and dozens of the mottled green and brown leaves emerging from the moss, a promise of more flowers on the way. How wonderful, I thought, to be greeting these earliest flowers one at a time when in a few weeks there would be large gatherings of fawn lilies in bloom throughout the island, their white tepals perfectly unfurled to catch the early morning light.

A great way to celebrate spring is to climb Mt. Young and check south-facing slopes, especially under the madrones, for shooting stars. It is a delightful plant. The five petals of its nodding pink flower are swept back from the cluster of pistils and stamens resembling flames trailing from its base, and thus its common name. Watch for fawn lilies, too, along the trail to the summit, and for the tiny yellow sprit chickweed monkey-flower in rock crevices

So, the wild flower season is underway. There are flocks of blue-eyed Mary in bloom among the mossy crevices of island bedrock (pictured above), Oregon grape unfolding its creamy yellow buds along the roadside, shiny western buttercups and saxifrage appearing in the meadows, and possibly even a few Calypso orchids peaking out of the duff. You might want to take a copy of Pojar & MacKinnon's Plants of the Pacific Northwest Coast or Atkinson & Sharpe's Wild Plants of the San Juan Islands with you on the trail. Both are great references for our area. Happy Spring!

Susan Vernon is a writer and naturalist who lives on San Juan Island.