I watched a Rufous Hummingbird lift off its nest for the first time not long ago. It didn't fly far on its brand new wings - just far enough to experience the possibilities of flight. Its mother soon appeared to feed the little Rufous some nectar - a boost of energy, perhaps, after the momentous undertaking. It was an auspicious occasion for me, too, watching the finely feathered fledgling levitate from a nest that was a wonder of green lichens and bits of bark fastened to the bough of a cedar tree with spider silk and a prayer.

I have been watching hummingbirds for years and looking for their nests, too. Now I know why they are so hard to find. The cup, meticulously crafted by the female, was constructed in plain sight, yet perfectly camouflaged in a play of shadows and green light among the conifers. 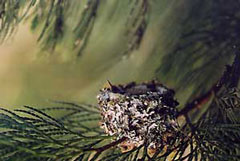 The nest tree was on private land, a respite of firs, cedars, madrones, Sitka spruce and pines. I met the property owner one day while watching birds nearby. She asked if I would like to see a hummingbird's nest by her house. I happily accepted the invitation and was surprised to find the treasure set in a tree just a few feet outside her studio window.

In the ensuing weeks, I visited Beverly's house several times monitoring the female Rufous as she sat patiently on two, smooth white eggs about the size of peas. We watched the Rufous and the calendar. After 17 days we surmised her brood had hatched. Then we began counting down the approximate 20 days from hatching to flight. 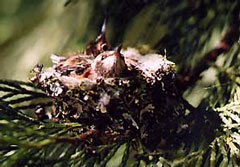 By the tenth day, two wide-eyed, downy, dark brown chicks filled the little cup. The adult came only long enough to feed them. Then she zoomed off with other Rufous females who had nests nearby, too. They nectared from a feeder, from cone flowers in the garden and blooming salal along the forest edge before disappearing into the conifers behind the house. I wondered if they were headed for the orange honeysuckle down by the creek: a good place to take a splash.

During my visits, I listened to the fluting sounds of Swainson's Thrush floating through the woods, to Orange-crowned Warblers trilling from the brush, and to Wilson's Warblers energetically chanting "cha-cha-cha" from the understory. Juvenile Spotted Towhees scratched out their living at the platform feeder in the yard, chickadees and nuthatches foraged noisily high in the canopy, and wrens seemed to be ranting everywhere. Lorquin's Admirals commandeered the ocean spray mindful of one another's territories. My time with the hummingbirds evolved into taking inventory of the flora and fauna of Rufie's realm. 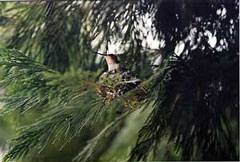 Before long, the hatchlings began to look more like hummingbirds. They grew flight feathers, and took on the soft green, bronze and white coloration of the adult female. It was a tight fit in a nest smaller than a tea cup. The chicks sat and watched and waited, their soft brown eyes scanning the boughs above and their long, dark bills often crisscrossed to make the best use of minimal space. They never made a sound that might attract predators.

Finally one morning, Beverly called to report one of the chicks had fledged. I rushed over to find the remaining nestling perched high in the lichen cup preening and adjusting its feathers. The adult female was close by and brought nectar for her little offspring. I watched closely through my binoculars trying to memorize every detail of its coloration especially the flecks of iridescent green feathers that sparkled on its back.

Suddenly, a high spirited Western Tiger Swallowtail fluttered over the nest and just that quickly the fledgling levitated out of its natal bed and onto a nearby bough where it perched for some time, occasionally stretching its wings. Later, after another visit from mom, it boldly explored the margins of the property taking an immediate shine to some sword ferns in the shade. Then it flew back by the big cedar to join its family. At that point, I bid adieu to the little hummer not wanting to disturb Rufie's critical first hours on its own. Beverly called later to report hummingbirds zooming about her yard and using the feeder all afternoon. 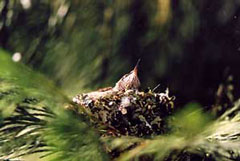 Now, nearly a month later, the female Rufous and her offspring are still close-by, but it won't be long before their southern migration gets underway. The male Rufous Hummingbirds - first to arrive in the spring working their way up the Pacific coast supping on currant, Indian plum and manzanita - are already leaving. Their reproductive chores were completed once the females were inseminated. While the males do not participate in nest building and rearing the offspring, they may continue to defend an important food source which is vital to the female and to the nestlings. The males return to the southern U.S. or Mexico via the coastal mountain range where late blooming wildflowers fuel their journey. The adult females will depart the islands before their offspring who will be on their own for the journey south. It amazes me to think the juveniles - such a short time ago only the promise of life in a pea-sized egg - are about to make the longest migration (per body length) of any avian species.

When the two nestlings fledged on June 24, Beverly and I celebrated. We had become vested in the well-being of those birds. Since then, the Rufous have learned how efficiently to fuel their high strung systems as they prepare to head south into a world filled with challenges. Their departure will be more momentous than that first flight. And come next spring, I will be waiting for their return and, later, checking that natal bough hoping to see another generation of hummingbirds reared in the shade of the old cedar tree.

Susan Vernon is a writer and naturalist who lives on San Juan Island.

Photographs, copyright 2003 by Ron Keeshan. No part of this column may be duplicated in any form without the written permission of the author or photographer.