Not long ago, islander Ron Keeshan was photographing swallowtail butterflies in his yard along the shore of North Bay when a fine thing happened. A monarch butterfly appeared. It was perched on a plant called Buddleia - often referred to as butterfly bush. Ron was in his zone, concentrating more on keeping in focus than on the swallowtails he was shooting. He aimed at the butterfly, adjusted the lens and pressed the shutter release. As he heard the click, there was a brief moment of recognition. But, Ron did not expect to see the monarch here so he dismissed it in favor of a deadline and moved on. It was not until the film came back from the developer that he realized what had taken place. The appearance of a monarch is a very rare occurrence in the San Juan Islands.

Monarch butterflies (Danaus plexippus) are long distance migrators. West of the Rocky Mountains, the flamboyant black and orange icons of the insect world are known to winter largely along the central California coast although some western individuals go to Mexico. Come spring, they disperse north and east looking for milkweed plants upon which to lay their eggs - the first phase of the famed metamorphosis from egg to caterpillar to chrysalis and finally to adult butterfly. To date, the San Juan Archipelago has not been a regular stopover in the wanderings of this species. 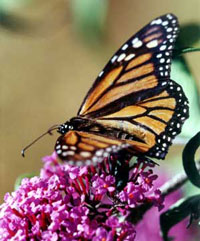 The monarch's visitation was a special event. I saw the smile on Ron's face when he got the photograph back. He and Liz were leaving for Churchill, Manitoba on a birding trip so I was entrusted with the image and began the process of verification that must accompany the submission of any rare sighting to the state butterfly registry.

As luck would have it, noted lepidopterist and writer Robert Michael Pyle, author of "The Butterflies of Cascadia," was in Friday Harbor working on a butterfly survey of the island. I caught up with Dr. Pyle at the ferry dock just before he headed home. He grinned upon seeing Ron's photo and confirmed it was a female monarch. It was not tagged, and therefore it was impossible to know the butterfly's life history but Pyle thought there was a slight possibility it was a long-surviving monarch that overwintered in California. More likely, it was the offspring of a monarch that had migrated north perhaps to southern Oregon. Monarchs may take three or four generations to complete the journey north and down south again.

This monarch may have been overshooting its range in search of milkweed. The plant is not native in the San Juan Islands. The closest wild milkweed west of the Cascades is near Salem, Oregon. Monarchs are breeders in eastern Washington where the plant thrives. Dr. Pyle commented, "Sometimes the monarchs just go and go and go in search of the plant. That could account for its arrival here." On their Autumn migration, monarchs can travel 50 to 100 miles a day and may fly at altitudes of several thousand feet. The spring migration is more gradual and random.

Dr. Pyle noted from Ron's photograph that the individual looked like an older butterfly. It was slightly faded and one wing was scarred. He characterized the documented sighting as important data in ongoing studies of the monarch's natural history and distribution.

It is possible that other monarch butterflies have visited the San Juans and simply have not been seen, or have been seen but not photographed for verification. There are several large black and orange butterflies here, including fritillaries and admirals, as well as bright yellow swallowtails. Some people call them all monarchs. Thus, confirming sightings in unaccustomed areas is difficult without photo documentation. In 1999, a monarch was photographed on San Juan Island - the only other confirmed sighting here for this species. Dr. Pyle sent congratulations to Ron and praised his efforts in developing a butterfly habitat in his yard. "This is a great photo," he said with enthusiasm. "There is no doubt it is a monarch."

There is an alternative reason why a monarch butterfly came to be sighted in the San Juan Islands. In recent times, a popular event at weddings has been the release of monarchs. This practice makes it difficult for monarch scientists and conservationists to record and understand the species' natural movements, as Pyle explains in his book "Chasing Monarchs" - a captivating account of his journey south from the Pacific Northwest following the monarchs' migration. While attempts have been made to rule out this possibility, anyone with knowledge of a butterfly release in or near the San Juan Islands in recent weeks or with other documented monarch sightings can contact me through the San Juan Islander and I will make sure the information is recorded.

Meantime, butterfly experts and enthusiasts are excited by this news, for most likely it was a wild monarch that touched down on San Juan Island. The nomad joins 40 species of butterflies documented in San Juan County. Approximately 150 species are found in Washington state. As summer winds down, I encourage islanders to keep watch for more monarchs. As butterfly habitat diminishes and we see slight shifts in climatic conditions, every piece of data on the movement of these animals is important to insure their long-term survival. So, keep an eye out. You never know what might flutter by.