The other morning I stood at South Beach and watched a Rhinoceros Auklet fly by. The small, sooty brown seabird sped low over the water just ahead of a pesky fog that had settled over Haro Strait. White plumes behind its golden eyes gave the bird a swept back look of determination as it hastened up the coast with rapid wing beats. Its stout orange beak - adorned with a small horn - was crammed with tiny fish.

The auklet is emblematic of the seabirds that gather here in August and September with one thing in mind - getting their fill of the huge silvery schools of Pacific herring, sand lance and surf smelt that race through inland waters feeding upon plankton and invertebrates and, in turn, being fed upon by wild congregations of birds.

Ancient intuition may bring some of the seabirds to the San Juans where the saltwater surges through the Northwest Straits helping to create a massive dispersal of nutrients that supports a web of marine life considered among the most diverse and abundant in the world.

The alcids are represented in the islands by Common Murres, Pigeon Guillemots, Marbled Murrelets, Ancient Murrelets, Rhinoceros Auklets and Tufted Puffins. Some, like the guillemots, are full time residents and nest nearby while others are seasonal visitors. I have watched the chunky birds from shore and from the decks of Washington State Ferries. Cloaked in shades of black, white, brown and gray, they are often close enough to identify yet far enough away to retain their elusive air. 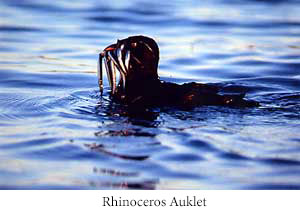 The alcids keep their own counsel amidst the feeding frenzy of Glaucous-winged Gulls and Heermann’s Gulls that dominate the sea scape, sleek black cormorants that maneuver swiftly from bait ball to bait ball, gregarious diving ducks and grebes, and the occasional tern that nose-dives into the swirl of fish to spear its catch of the day.

The seafaring auks are well adapted for this near shore fishing extravaganza. Short, strong wings propel them beneath huge schools of forage fish where they grasp a share of the finny hoards while herding the rest toward the surface feeding gulls.

Watching the summer gathering from shore has always been frustrating even with good binoculars and a spotting scope. Last August, a high-spirited friend who shared my curiosity about the inscrutable seabirds suggested we take a closer look. We launched her 23 foot Bayliner out of North Bay upon a calm sea only slightly disheveled by a warm summer breeze. Within ten minutes we spotted a fleet of birds. Among the skittish gulls and grebes were Common Murres. Some adults were still in breeding plumage, their sleek chocolate brown heads, backs and wings offset by white breasts and flanks. Many of the dapper birds were males newly arrived with their offspring from the nesting colonies at Neah Bay. They were milling about, mumbling to themselves, and keeping the youngsters corralled in little flotillas as they drifted upon the rumpled sea.

These curious birds strike a fine balance between living on land and upon open water. Nesting along the steep cliffs of the outer coast, each pair of murres broods a single pyriforme egg, a capsule of ingenious design that rolls in a circle when disturbed rather than plummeting off the cliff into the sea. After a month of incubation, often on a barren rock ledge, a precocial chick hatches, yet remains at the precipitous site for about 21 days.

Both parents tend the downy offspring and fend off predatory gulls. By August the female relinquishes her responsibility to the family and heads for the open ocean. The males vocally coax the chicks from their lofts. Still flightless, the youngsters perform the ultimate leap of faith - fluttering down to the rocky shoreline where they gather in large nursery groups. Then, the adults lead them through the Strait of Juan de Fuca to inland waters to fish and learn the ways of the world. 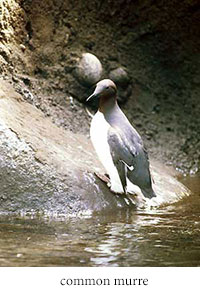 Our boat approached the birds spread out across the sea of blue into San Juan Channel. They were in a resting mode. We cut the engine and drifted in the stream. The black-capped youngsters - not yet fully grown - peered at us through inquisitive dark eyes then closed ranks but did not dive.

One of the distinctive characteristics of murres is their peculiar vocalization. It sounds a bit like angry humming, as though the birds clench their jaws and sputter out of both sides of their long, ebony beaks. MURRRRRE, MURRRRRE they whined as we slowly proceeded past the flotilla of dozens, finally many hundreds of murres. They calmly paddled aside and rode the wake of the boat like strings of little feathered buoys. While tempted to linger, we moved on instead not wanting to disturb them or to anger the fates that had provided such an extravagant gift.

Seeing that assembly of young murres was a memorable experience - and a privilege. Later we saw dappled brown Marbled Murrelets newly arrived from the old growth forests of the North Cascades, and juvenile Pigeon Guillemots kicking up their little red heels as they learned to forage along the rocky shoreline. Ancient Murrelets arrived later from the Queen Charlotte Islands, another alcid that begins its life among ancient conifers but thereafter thrives on the sea.

Hundreds of thousands of birds use the Salish Sea all or part of each year. The alcids are my touchstone to the vast array of life that flourishes just offshore yet seems far removed from our consciousness. All these birds have fascinating life histories and irreplaceable importance to the web of marine life in the archipelago.