Not long ago, I saw Matt Pranger's photograph of cattails at Percich Pond. It was a beautiful image of an idyllic island scene. Why, I wondered, was I sitting indoors catching up on my reading when there were so many fascinating places nearby to explore- even if it was only 25 degrees Fahrenheit outside. I waited for it to warm up a bit before I headed out, but soon I found my own stand of cattails to contemplate. 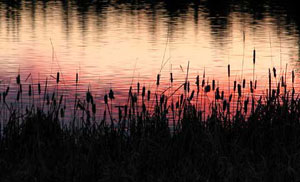 Freshwater wetlands are intriguing places. Not only are they vital to the health of natural systems, but they are essential to preserving the biological diversity here. For instance, even a small cattail marsh is an ideal winter retreat for ducks, geese, and swans that forage and seek shelter in its maze of channels and crawls. These semiaquatic plants, sometimes rising six feet out of shallow water, are remarkably adaptive to seasonal use by wildlife.

My favored marsh spans about twenty acres along the margin of a mixed forest of conifers and deciduous trees. The shrub zone between the two habitats is a tangle of hardhack, snowberry, ocean spray, Nootka rose and dozens of other plants. This diversity of vegetation is an excellent resource for birds, mammals, and aquatic life.

In the spring, this parcel of cattails is a riot of activity. Male Red-winged Blackbirds flash their vermillion epaulets from atop the cylindrical brown spires proclaiming konk-la-ree in an audacious display of territoriality. Other birds stake their claims to this rich habitat, too. Nesting Marsh Wrens rant incessantly from the cats, grasses, and sedges. Rufous Hummingbirds, sparrows and other song birds pluck cottony fibers from last year's spikes to line their nests; Violet-green Swallows and Tree Swallows swoop just above the candlewicks snatching insects from the swarm; and Wood Ducks, which nest in the hollows of nearby conifers, bring their chicks to feed in the security of the dense cattail thickets. 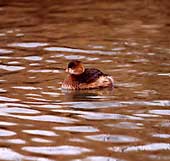 Yellow pond lilies form a movable substrate upon the open water between the cattail colonies. Coots dodge indigo dragonflies to scramble aboard the heart-shaped leaves - resembling floating dinner plates - where they snatch beetles, gnats, and other insects; and Pied-billed Grebes nibble the curly fringe of the plants before diving, like little submarines, on cryptic missions in the shallows.

Along the shore, Virginia Rails tiptoe in the muck chanting yuk-yuk-yuk to define their space; Common Yellowthroats call wichity- wichity - wichity from the rushes; and bull frogs lend bass notes to the chorus that reverberates through the warm vernal air.

Now, in winter, the ebullient chatter has been replaced by the cackles and guffaws of wintering waterfowl. While many of the summer birds have migrated south, dabbling and diving ducks have arrived from their breeding grounds farther north. Their noisy comings and goings dispel the notion that this habitat slumbers until spring.

The low arc of the sun flattened out the early morning light as I started my walkabout the marsh. A thin layer of ice had accumulated upon the water overnight. A Mallard gave her familiar quacking call, then took on the task of icebreaker, leaving little bits of slush in her wake as she paddled about creating a pool of open water on the pond.

Sixteen species of waterfowl use this maze of wicks, rushes, and muddy water. The more common ducks are Buffleheads, Lesser Scaups, Hooded Mergansers, Gadwalls, Ring-necked Ducks, and Northern Pintails. American Wigeons dominate the marsh this season; their creamy-white crowns are suggestive of their nickname: baldpates. Highly gregarious by nature, they squabbled to one another in squeaky voices and nervously leapt into the air at the slightest provocation. At twilight, the wigeons would likely join hundreds more of their kind roosting near False Bay.

In contrast to the wary wigeons, sleek Common Mergansers quietly drifted in the gently ruffled water; their white breasts and sides, deep green heads, and red bills made them conspicuous on a sober scape that lacked spring's viridescent glow. The mergansers are fishers among the vegetarians and filter-feeding waterfowl that thrive in the shallows.

On the other side of the marsh, I heard an unfamiliar call: a nasal breep-breep-breep, and then the sound of ducks splashing down. I went to investigate and found two pair of Green-winged Teals resting in the water which was still slightly disheveled by their descent. A small flock of dapper pintails quickly moved out of their way to reclaim their solitude elsewhere.

I moved on, as well, to a quiet niche in the shadow of the conifers at the southwest corner of the marsh. Peering through my binoculars past the bare stems of black twinberry, I counted ten, twenty, thirty, then close to forty Northern Shovelers, colorful little dabbling ducks, milling in the center of this nook. They split into two groups and began spinning in circles, their bodies touching one another and their spatulate bills - edged with tiny bristles - poised just at the surface of the water. The tightly knit group moved in a clockwise direction creating a little whirlpool; the movement allowed them to siphon tiny invertebrates from the icy water. Individual ducks spun, and the whole group circled silently, although I imagined I could hear a faint slurping sound as they meticulously filtered through the brine.

Reluctantly, I left the gathering and continued around the marsh. Abandoned bird nests caught my eye: the Common Yellowthroat's woven cup of reeds and grasses was still snugly nestled among the hardhack; a sturdy bowl of reeds in a willow reminded me of the Yellow Warbler's stay; and just out of reach across a patch of black muck, the reedy womb of a Marsh Wren was securely attached to a cattail stalk. Then I found the Red-winged Blackbird's bower. The nest consisted of cordons of tough, strappy leaves strung around a bundle of cattail stalks; woven inside was a bed of soggy reeds, grasses, and leaves. By winter's end, the rain and wind would dismantle these brilliant pieces of animal architecture.

Around a bend in the trail, I noted the cattail stands had proliferated. This primitive vegetation spreads through still, shallow water via rhizomes; dense stems send out shoots in the mud which rapidly develop into new plants. These nutrient-rich rhizomes are a favored food of long-necked geese and swans, and muskrats that savor the succulent shoots. This marsh is a muskrat-free zone, but just down the way a little tribe of the feisty fur-bearers are thriving on this same species: Typha latifolia.

The cattails were an important resource for the First People here, as well. They used nearly every part of the plant: leaves were woven into baskets, mats, and thatched roofs; fluffy seedlings became stuffing for pillows and toys; and the juice from young leaves and stems healed wounds. Most parts of the plant are edible; tender shoots are a delicacy. 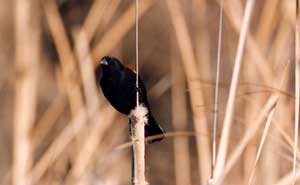 As I headed back to the trail head, a flock of male Red-winged Blackbirds, winter holdovers, flew in from a stand of willows and took up their stations in the marsh. Stifling their boisterous territorial calls of spring, they still postured on the cattail stalks. The swamp birds tilted their sharp, black bills upward and glared at one another with dark eyes as if to say, "Keep your distance!"

A Northern Harrier made low, slow circles over the mass of straw-colored cats, paying no mind to the sentinels as its focus was on finding mice, snakes, frogs, and other marsh delicacies. With just a hint of sun burning through the clouds, the marsh hawk's shadow left no trace upon this watery realm.

My only disappointment was not finding swans, but the cats had encroached upon the open water that the big birds need to take off and land. I could hear their bugling calls nearby, however, and knew that the many ponds, lakes, and flooded fields about the island were providing safe havens for our winter troop of trumpeters.

My last sighting of the day was a Marsh Wren. It was more curious than cautious now. The demur bird flitted from one pool of sunlight to the next, flicking its tail, and occasionally uttering a softer, abbreviated version of its buzzy springtime rant. The little reed-dweller's subdued song in the relative solitude of cattail country was the perfect finale to my fine winter walk.