Mid-September. Migration time. While some islanders were watching the southern movement of birds I was standing knee deep in beach grass along the dunes at Cattle Point looking for butterflies.

This late in the season the possibilities were limited. Most flowering plants had gone to seed and nectar sources for the few remaining species on the wing were getting scarce. Warm sunny days were on the wane and soon adult butterflies would be gone until next spring. Still, this end time was intriguing. 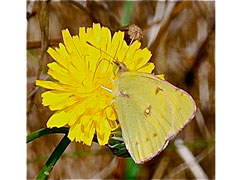 I was searching for sulphurs. The medium-sized, bright yellow, nimble flyers abundantly range the globe and, while common on the mainland, do not appear to be full-time residents of the San Juans.

Sulphurs are pierids (the family of whites, marbles, and sulphurs) that appear here in late summer along dunes, scruffy backbeaches, and grassland habitats. The bright yellow blooms of the common aster Hairy Cat’s Ear (Hypochaeris radicata) - a favored nectar plant - act as beacons for these Cascadia butterflies that count on open spaces remaining intact to sustain them on their end of season peregrinations.

I had seen the Orange Sulphur (Colias eurytheme) at Cattle Point, but not often, hence my quest to find it again. I monitored the dunes for several days in perfect butterfly weather: calm, clear, and mid-70 degrees. No luck.

I was heartened, though, by the cheerful presence of Painted Ladies (Vanessa cardui), large, colorful brushfoot butterflies (Nymphalidae) that are recognized and beloved around the world. Boldly patterned in black, white and orange, the blotches, eyespots, and cat’s eye patterning on their scaly wings insure a dramatic presence on the fly. They flutter flamboyantly among the forests of Canada thistle that have vegetated the dunes, in some cases, choking out the highly prized Northwest native plants that thrived here. Yet, when the ladies perch and fold their wings, this same coloration offers perfect camouflage in the tangled understory where they seek refuge. 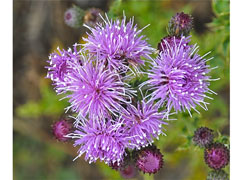 Painted Ladies are called “thistle butterflies.” Thistle is, by far, its most important host plant, where the female lays her eggs and the caterpillars feed before transforming into chrysalids and finally into flying adult butterflies. While other plants including mallows and lupines may be used as hosts, it is the weedy aster that primarily sustains this species.  Granted, thistle can be an overpowering presence that supplants native landscapes, but it has an undeniable place in the complex and ever-changing web of life.

Painted Ladies are the most abundant and cosmopolitan of butterflies occupying all continents except Antarctica. Its worldwide distribution can be attributed in part to the unrelenting spread of thistle. And so as an admirer of the butterfly, I temper my frustration with the highly invasive spiny-leafed plant and appreciate its role to some butterflies and birds.

Painted Ladies may be found at Cattle Point in spring and summer. Their numbers fluctuate greatly depending on climatic conditions and food supply elsewhere that appear to impact their migration into our region. Some years the ladies are a conspicuous presence on the green-dappled dunes; other years rarely a single individual can be found. You may notice this same phenomenon in your island garden where Painted Ladies may be common visitors one year or absent the next.

Vanessa cardui has been extensively studied but it wasn’t until 2009 that researchers in Europe discovered this species ability to migrate long distances. Millions of Painted Ladies in the UK, once thought to die at this northern end of their range, were tracked by specialized radar in a sophisticated, citizen-assisted study on a 9,000 mile round trip from the UK to North Africa and back again. It was a multi-generational feat. Scientists were flabbergasted by the revelation ending decades, if not centuries, of speculation as to what happened to Painted Ladies in the winter. On some phases of Vanessa’s journey, it ascended to over 3,000 ft. in altitude to catch the wind streaming south. This behavior may be why the migration went undetected until radar was implemented in data collection. 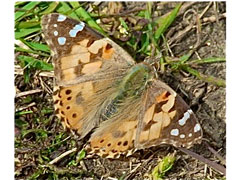 North American Painted Ladies do not appear to migrate the extreme long distances of their European counterparts. Here in the Pacific Northwest, those that do not succumb to the first frost may follow the sun to the southwest. James and Nunnallee report in the Life History of Cascadia Butterflies: “The S. return migration (of Vanessa cardui) in autumn … can be observed along the SW ocean coast of WA. when E. winds concentrate migrants near the ocean.”

Come the following spring, another generation of Painted Ladies may take leave of their residency in California to re-populate Oregon, Washington, and southern British Columbia. Mass migrations of millions of Painted Ladies have been documented. In May, I stood at the Redoubt at American Camp and watched Painted Ladies touch down by the dozens presumably from their flight north. They arrived in faded garb, some with torn and tattered wings from the challenges of the immigration. They made the journey at lower elevations flying at speeds up to 25 miles an hour and sometimes averaging 100 miles a day. Upon arrival, their biological role was complete once the minute green eggs of the next generation were deposited on host plants. At Cattle Point, if thistle was not yet in bloom, I suspect seashore lupine (Lupinus littoralis) - rife on the dunes – may have sufficed. In either case, their life-affirming connection to our islands continues.

When I browsed some files on Vanessa cardui, I found an interesting report from North Dakota State University. That state occasionally has major influxes of Painted Lady butterflies. Some years, their numbers are so great that the caterpillars damage crops – much as some sulphur butterflies do. But, the ladies may also act as an effective bio control agent for Canada thistle that also threatens agricultural production. In the years when the butterfly population is exceptionally high, Painted Lady larvae can significantly reduce thistle.

While waiting for the sulphur butterflies to arrive on San Juan, watching the splendid burnt orange and black Painted Ladies in the beguiling blossoms of thistle was great fun – and thought provoking. Along the trail, I occasionally dusted up Ochre Ringlet butterflies, as well.

Upon following them into the grass (with my binoculars), I found they were nectaring on thistle as were the ubiquitous, elfin Woodland Skippers. One day a Pine White butterfly floated down out of an old Douglas fir. It headed for the lavender blooms of thistle, as well. Clearly thistle was nourishing these late-summer species. 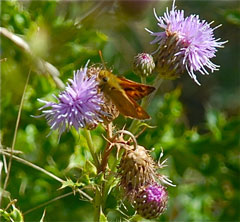 I monitored the butterflies at Cattle Point for several days and continued to wait for Colias. Beth St. George on Lopez emailed to report at least two sulphurs had appeared at Iceberg Point. They were nectaring on thistle. I persevered.

Almost imperceptivity, the season was shifting. Showers were in the forecast. The autumnal equinox was only a few days away. I got to the south end ahead of the rain and herded four Savannah Sparrows, soon to leave on their journey south, along the trail as I walked toward a thistle patch to continue my vigil. Earlier in the season, these sparrows likely fed on butterfly larvae on thistle host plants here. The American Goldfinches - another thistle dependent species – had departed but left in their wake piles of silky thistle down some spiraling through the air as a breeze kicked up.

Standing by the willow grove, a Painted Lady bolted out of the tired old trees and brushed over my shoulder on its way toward the shoreline. This was no casual fluttering, rather a fast, straight, determined flight toward the channel. It disappeared over the dunes before I could catch up. Was it time for Vanessa to head south, too?

But where was Colias? I couldn’t resist one last perch on the fence before heading home. As I scanned the dunes, there was the hairy cat’s ear – waiting; there was the thistle – beckoning. And finally, there was a single sulphur butterfly. 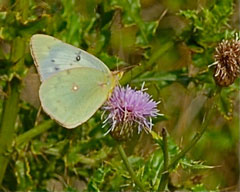 It looked duskier than I remembered and a bit smaller, but I immediately recognized the fine, fresh pierid that fluttered out of a swale and nectared on -what else - thistle. Colias was skittish and moved quickly from one plant to another. She stayed only long enough for me to appreciate her faint yellowish-lime green coloration, to see the light eurytheme spots on its ventral hind wings and to note the large silver discal spot encircled with rich pink that was diagnostic of her kind. Then a ringlet flew out of the grass nearby and startled her. That quickly, this daughter of Zeus (for the white butterflies were named for the Pierids of mythology) sped off etching her way along the edge of the thistles to the far side of the grove. I did not follow. Colias needed a quiet place to feed and rest and the secluded thistle patch would give her that opportunity.

In the days that followed, I found several more sulphurs along the coastline. When I got home after that first sighting, I hit the books to identify the sulphur I had seen. Three species are possible visitors here: Orange Sulphur (Colias eurytheme); Clouded Sulphur (Colias philodice); and Western Sulphur (Colias occidentalis). Not sure of my identification, I contacted Ann Potter, insect specialist for the Washington Department of Wildlife for an assist. It was the Orange Sulphur. Why had I so stubbornly waited for Colias to arrive? And what did it matter which species I had seen? One reason was the sheer joy of discovery. Imagining the tiny creature flying over open water to reach the islands seemed an admirable feat and it made me smile. But there is more.

During my reading in Robert Pyle’s classic work The Butterflies of Cascadia he remarked on matters of species identification and nomenclature: “ Nature doesn’t really care what we call it,” he wrote. “However … In order to recognize our own impact on other species, and to conserve their habitats, we must first know how to identify and characterize the elements of natural diversity.” That is the point. The San Juan Islands are known for biological diversity. If we are to protect this diversity we must know and understand its totality. A species of butterfly does not have to be critically endangered to garner our attention and our respect. All the forty plus species that live or visit the archipelago are a part of this unique web of life here.

While waiting for Colias, I was reminded of the important role thistle plays in the lives of island butterflies. Other species in San Juan County that nectar on thistle include Satyr Anglewings, Mylitta Crescents, Anise Swallowtails, Western Tiger Swallowtails, Lorquin’s Admiral, Purplish Coppers, Zerene Fritillaries, and Western Meadow Fritillaries. As the third most important pollinators in our state, these butterflies have value to us beyond the esthetic.

Work to eradicate thistle here, as elsewhere, continues and with good reason. Whether along roadsides, farmer’s fields, or parks and preserves the unmanaged proliferation of non-native thistle degrades native habitats that support biological diversity.

What to do? In a changing world where species survival hangs in the balance, small, supportive, thoughtful steps to mitigate habitat degradation can make a difference to wildlife. We see this happen in the islands as land preservation groups do remarkable restorative work with sensitivity to what the changes mean to wildlife.

I am hoping we will opt to retain some of the unrestored land, too – the unbridled thistle patches, for instance, that support the Painted Ladies and the bright yellow Colias on their late-summer wanderings about Cascadia. They have a place here too – a place we can all enjoy.

SAN JUAN NATURE NOTEBOOK / SEARCHING FOR SULPHURS. Text and photographs © 2014 by Susan Vernon. She can be reached at: susanvernon@sanjuanislander.com Susan Vernon is the author of Rainshadow World – A Naturalist’s Year in the San Juan Islands.