Filter-feeding fishes range in size from anchovies the size of your finger to whale sharks longer than a school bus. 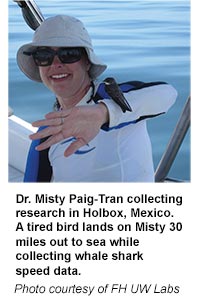 Most of what we know about this feeding technique is based on how small fishes and invertebrates filter planktonic food from the water. Dr. Misty Paig-Tran has been interested in the four independent evolutionary lineages of very large filter feeders — all of them cartilaginous fishes.

These giant sharks and rays feed on prey the same size as other filter-feeders, yet they are orders of magnitude larger. They include some very charismatic species: the whale sharks, basking sharks, megamouth sharks, and the manta and devil rays.

Studying these large fishes in their natural environment is difficult as they are fast- swimming and are often only accessible seasonally. So, Paig-Tran, in collaboration with Dr. Adam Summers, combined field studies with lab work in a flume and morphological investigations using the tabletop scanning electron microscope at Friday Harbor Labs.

An important point to consider when thinking about the problem of filtering huge numbers of small prey items out of the water is that the filter pore size for all the large filter-feeders is larger than the prey. This has very interesting implications for biomimicry and explains why the filters do not clog, but it makes the filtering itself somewhat mysterious.

In the first of their studies, published as a cover article in the Journal of Experimental Biology, they showed that the speed of swimming alone could affect the size selectivity of the filter. A filter-feeding whale shark or manta ray could tune its filter to the locally available prey by shifting its swimming speed. This is quite remarkable, but it does not really shed any light on exactly how the particles are being captured, and once they are captured, how they are being transported. For that they turned to the microscope and surveyed the shape of the filter elements. 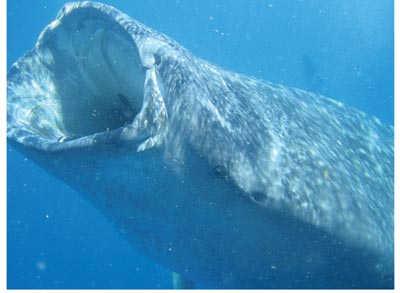 Fishes make use of a keratinous structure (the material your fingernail is made of) called the gill raker to filter their prey from the water. In many fishes these rakers resemble the teeth of a comb and strain food from water via a sieving mechanism, just as you would separate pasta from water with a colander. 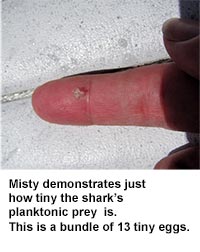 A cover article just published in the Journal of Morphology, the second of a three part series on filtering, finds Paig-Tran and Summers looking at the manta and devil rays gill rakers. These fish have an unusually shaped raker — a flattened filter pad that resembles the bi-lobed leaves of a fern. The surface of the filter pad is highly variable between species and these differences have huge effects on the way the animals separate food from water.

Some of the devil rays have a layer of tiny hairs (cilia) that transport particles toward the animal’s esophagus for swallowing. In addition to providing the ammunition to fuel further studies on the fine scale flow patterns the work also has important conservation implications.

We were surprised to find that each species of ray is easily distinguished simply by the shape of their filters. This is exciting news for manta and devil ray conservation.

Fishing pressure for mantas has increased recently as traditional Asian medicine claims that the filters of these fishes help to aid the liver with removing toxins from the body. It is not uncommon to see thousands of dried, isolated gill structures in markets.

The illustrations of the rakers in the recent paper have already been used to identify the species being targeted to supply a market in China.

Presumably a thorough survey of markets could serve as an assay of the diversity of devil rays being caught for this new trade. 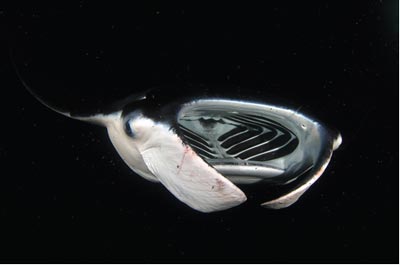