When you say that you study banana slugs and the European brown terrestrial slugs, even people at Friday Harbor Labs often respond either, “Disgusting!” or “You can come to my garden and kill all you want.”

Eugene Kozloff (much-beloved former FHL resident) said with respect to the brown slug: “If you have to hate anything, let it be this slug, a cruelly destructive pest if there ever was one.”1 Why would anyone study such nefarious creatures, and do they deserve the poor reputation they have?

First, while they can reach comparable sizes, there are large differences among the slugs you might see on an early morning walk along FHL’s "fire trail". The banana slug (Ariolimax columbianus) is a native species, which ranges in color from all yellow to yellow with brown splotches to (more rarely) almost all brown. Whatever its color pattern, you can tell banana slugs from other local slugs by their single central dorsal ridge running the length of the foot (Figure 2A and 2B).

This species is the second-largest terrestrial slug in the world, easily as long as your hand. It has had no comparably-sized slug competitors in its evolutionary history. That is, not until within the last century when the other slug we study, Arion rufus, was introduced from Europe. This invader likely entered western North America via the Puget Sound region around 1930 and soon spread to other parts of Washington, Oregon, British Columbia, and Alaska. 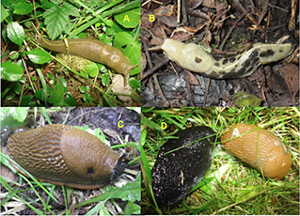 Fig. 2: Slugs of many colors: color variants of the native banana slug (A & B) and the invasive Arion rufus (C & D).

The native banana slug inhabits forests but largely avoids the grasslands and disturbed habitats of towns. The invasive species, on the other hand, can inhabit all of those areas. However, in the grasslands it is predominantly darker brown (Figure 3C), while in the forest there is also a black morph and more of the brighter orange-brown slugs (Figure 2D). This distribution caused the students I'm working with and me to wonder whether this one species might be splitting into discrete subpopulations, each of which prefers to live in different areas and does not interbreed with slugs in the other microhabitat. Over time, this separation could cause one species to diverge into multiple species. Additionally, we wondered whether the invasive species might compete with the native slug in the forest, eating the same types of foods and using the same types of shelters. 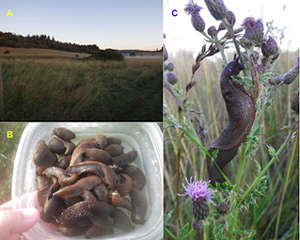 Fig. 3: Grasslands inhabited by the invasive slug Arion rufus. (A) Our study site, thanks to Dr. Rachel Merz. (B) Yield of early morning collecting for 15 minutes. (C) The invader is an adept climber.

So far, my studies with FHL REU students 2 Elizabeth Thompson and Kerry McGowan (Figure 4) have shown that both species have diverse diets, but eat herbaceous plants more than ferns, lichens, or tree seedlings. Stinging nettles appear to be a surprising favorite of the slugs, which are apparently unperturbed by the morphological defenses of the plant's hairs. Our data showed similar preferences among the invasive slugs from different microhabitats, and preferences remained consistent across different sizes of slugs of both species. Because the native and invasive slugs have the same general preference ranking across the tested foods, large populations of the invader may compete with native slugs. However, both species have such wide diets on relatively common foods that this competition is not likely to be important so far.

On the other hand, in contrast to studies3 that showed the native slug barely ate mushrooms, my studies with FHL REU student Melissa Mayol have shown that both native and invasive slugs preferred fresh mushrooms to lichen, sword fern, and pathfinder (an herbaceous plant), and the two slugs consumed mushrooms at about the same rate. When mushrooms were oven-dried and lichen super-hydrated, both species of slugs switched their preference to the lichen. This finding suggests that moisture and texture are more important here than nutrients. Because mushrooms are typically scarce and patchily distributed, they may represent an important limited resource, triggering competition between the slugs. 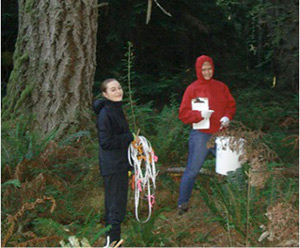 We also examined the effects of temperature on feeding rates in both species of slugs, using 5°C to represent a current average spring night, 10°C for a summer night, and 20°C for a summer daytime temperature. Despite the fact that slugs are ectothermic (cold-blooded), feeding rate did not increase with temperature for either species. Moisture levels, which differed slightly across our temperature chambers, may be more important than temperature. This could be a critical consideration when predicting how these terrestrial slugs will respond to impending climate change.

This invasive species represents an impressively prolific new player in native grasslands and disturbed habitats. We easily collected over 80 slugs in 30 minutes from the same field every other day for a month this summer, during a terrible drought. Such an abundance of slugs suggests that their feces might be an important consideration, accelerating nutrient cycling and fertilizing the grasslands. So, FHL REU student Rebecca Cotton (Figure 5) and I exposed seedlings of annual ryegrass to one of three treatments (live slugs, slug feces only, or no slugs) to separate the impacts of feces and herbivory.

After a month, we were surprised to find no significant difference across any of the treatments in seedling germination, seedling survival rate, grass blade length, or above- or below-ground biomass production. If the slugs are speeding up nutrient cycling, it is not noticeably increasing the growth rate of grasses, which is important for hay fodder. Whether other plants will be more sensitive to the slugs' impact remains unknown. 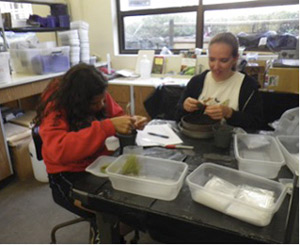 In sum, these two large slug species feed on many of the same plant species. While competition for food in general is likely weak, they may be driven by moisture needs to seek the same limited resource of mushrooms. Climate change alterations of rain events and overall moisture may have more important impacts on slug populations than temperatures. The rate of growth of the local grasses has likely been unaffected by the introduction of the invasive slug in the grasslands. Thus, while local gardeners will tell you stories of decimated basil, lettuce, and even horseradish due to this new invader, we can’t point to a benefit from this species in the natural ecosystem other than mirroring the habits of the banana slug to consume dead material. Perhaps Dr. Kozloff was right when he advocated hating this invasive slug.

Some local FHL members' morning walk routine includes collecting the invaders to freeze them, or cutting them in two, or stepping on any they encounter. Just be sure not to harm the native banana slugs, who are rarely garden pests and are an important local icon and rightful member of the ecosystem. Instead, take the time to squat down and literally look them in the eyes (which are prominent at the tips of their eyestalks). You might be surprised at how fascinating you find them up close (Figure 6). 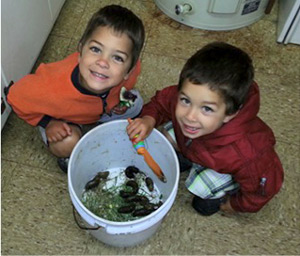 Fig. 6: For some, happiness is a bucket of slugs! (The author’s twin boys, Jackson and Tyler.) 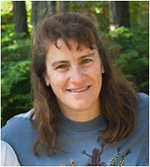 My students and I would like to thank the UW Friday Harbor Laboratories, Muhlenberg College, and the National Science Foundation for funding which allowed us this research opportunity. Further, we would like to thank FHL, Rachel Merz, Jeannie Meredith, Claudia Mills, and San Juan County Land Bank for access to study areas and helpful conversations.

2REU = Research Experience for Undergraduates, which is short-hand for the Blinks-NSF REU-BEACON internship summer research program for undergraduates, a research opportunity funded through grants from the National Science Foundation (NSF) and the Blinks research fellowship to link undergraduate students with scientist-mentors as collaborators on original research projects.