As Linnaeus, the father of taxonomy, said: “If you do not know the names of things, the knowledge of them is lost, too.” (Linnaeus, 1751).

Billie J. Swalla, Friday Harbor Labs Director, and Gretchen Lambert, a long-time FHL researcher and Whiteley Scholar, joined six other ascidian (sea squirt, Figure 1) taxonomists from around the world in February at the Flanders Marine Institute in Oostende, Belgium (Figure 2), a modern outgrowth of the very first marine research station in the world (1843).

We met to learn from the WoRMS (World Register of Marine Species) data management team about the website (http://www.marinespecies.org/ascidiacea) and discuss issues unique to ascidian taxonomy. Our goal with the Ascidiacea Database at WoRMS is to provide the most authoritative list ever published of all ascidian species globally, with bibliographic references, distribution and other data, including the names of all species synonymized under each current valid name. This is a mammoth task, with nearly three thousand species of described ascidians and more being discovered every day during ocean exploration and biodiversity surveys. 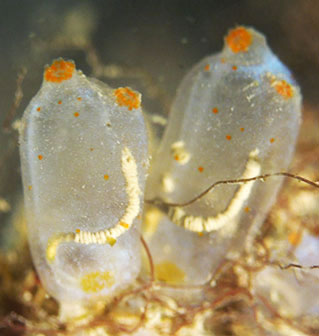 Fig. 1: These ascidians (Ecteinascidia thurstoni) are from Singapore, but these two show nicely the incurrent siphon (orange pigment) to the left and the excurrent siphon to the right. They are filter feeders that capture plankton to eat. The heart is located near the base of the animal. Photo credit: G. Lambert.

The three day workshop covered multiple aspects of the WoRMS web site. We all found parts of it that we had not known about and learned how to better enter the data and correct errors. The importance of keeping the WoRMS website up to date and accurate was on everyone’s mind, as it has become the “go to” site for marine biologists worldwide and also is increasingly linked to other marine animal databases, such as invasive species. We were thrilled to be joined by Françoise Monniot from Paris, who is the reigning world expert on ascidian taxonomy, with hundreds of publications and still publishing major taxonomic monographs at the Paris Museum of Natural History. The others included (alphabetically) Adriaan (Arjan) Gittenberger, GiMaRIS Marine Research Inventory & Strategy and Museum of Natural History “Naturalis”, Leiden, Netherlands; Marc Rius, who recently started his own lab at the Univ. of Southampton England (Marc organized this meeting and obtained the funding for it from the Belgian LifeWatch); Rosana Rocha, Universidade Federal do Paraná Brazil; Noa Shenkar, another young ascidiologist with her own lab at Tel Aviv University Israel; and Xavier Turon, Dept. of Marine Ecology, Center for Advanced Studies of Blanes Spain (Figure 3). 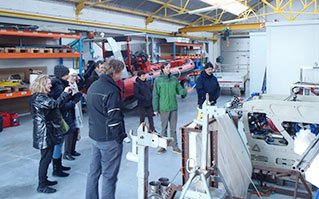 Fig. 2: The WoRMS team explores the oceanographic machinery at the Marine Station at Oostende on a guided tour of the facility. Photo credit: M. Rius.

We first tackled the many question marks next to various fields on a number of entries in the Ascidiacea Database. These question marks flag entries that have not yet been checked for accuracy by one of the Ascidiacea editors. There seemed to be an impossible number of them, so we each volunteered to take on one or more ascidian families to check all species entries for accuracy and add additional information such as taxonomic and distribution bibliographic sources. Once we looked into these in earnest, we realized that some things can be checked rather quickly but others will take some time and reading.

Accomplishments for the three day workshop:

1. New WoRMS email list — for all of the Ascidiacea Editors and the data management team (DMT), so that no one gets left off the list when there are important issues to discuss in the future. 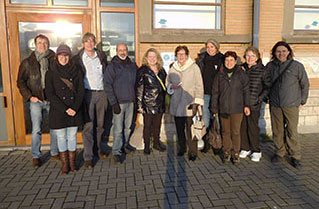 3. Families and Genera of Ascidiacea — Claude and Françoise Monniot many years ago composed a tabular key to the ascidian families and genera of the world, which Françoise and Gretchen have been revising. Rosana will transfer it to an Excel table and this valuable tool will be uploaded to the WoRMS website. Taxonomists tend to be "lumpers" or "splitters," and the splits can result in many genera with only one species each, or a family with only one genus. It was agreed that future molecular phylogenies will be used to create monophyletic groups and to use new data to decide whether to collapse some of these closely related families.

4. Taxagloss — Rosana has created a glossary containing all the taxonomic terms for the Ascidiacea, which WoRMS will upload to the database so that everyone has access to it. These terms will be available in different languages, starting with English and Spanish and then adding French, Dutch and Hebrew, utilizing the expertise of the eight editors. It will be a lot of work for everyone, but a wonderful resource for all tunicate taxonomists especially when used in conjunction with the Families and Genera tabular keys. There was a rousing discussion of larval anatomy: what the larval sensory vesicle is and whether it includes both the ocellus and the otolith, and an illuminating talk about papillae and where secondary and intermediary papillae are located. With this much discussion on just a few terms, it may be a while before the glossary is finished! 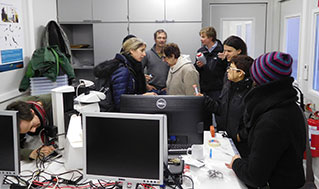 Fig. 4: The only heated room at the marine station, for a few computers and microscopes. The office work is done in a nearby modern building. Photo credit: G. Lambert.

5. International Code of Zoological Nomenclature — We discussed the conundrum of Family authorship before 1900, a period when not all genera were placed into families. For example, Ascidia, a genus described by Linnaeus: the authorship for the family Ascidiidae, erected later by a different taxonomist, is still Linnaeus. We have this problem in 9 ascidian families!! Arjan and Billie will prepare a manuscript requesting from the Zoological Commission a revision to the code rules for family names in the International Code of Zoological Nomenclature. 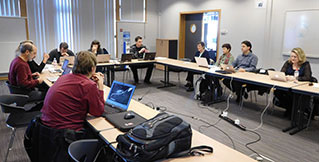 Fig. 5: The WoRMS Data Management team and the Ascidiacea Editors hard at work during the workshop. Photo credit: G. Lambert.

It is amazing what can be accomplished by cooperation of like minds (Figures 4 & 5) over just a few days! We made a lot of progress, and left with our “to do” lists which we'll look over in a year to see how far we’ve come. Best of all, we made new friends and a closer relationship with the WoRMS Data Management Team, we now understand the database better, and we all enjoyed the hospitable atmosphere in historic Oostende. We hope you enjoy using the Ascidiacea Database in WoRMS and find it useful to your research.