Snails are the quintessential slow animals. They manage to move from place to place, but at a pace that is infamous. These animals don’t seem like ideal candidates for studying thermoregulation behavior. Thermoregulation studies traditionally involve speed demons like lizards and insects. Yet mobile critters in the dynamic intertidal zone confront large swings in temperature as the tides ebb and flow. I wondered if slow-moving snails were regulating their temperatures on a really different timescale from what we observe in speedy animals. 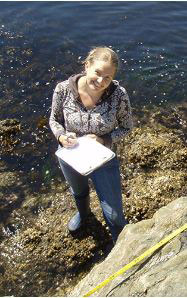 We commonly think about temperature cycling over the course of a day: Earth’s surface heats up as the sun rises overhead, and cools off at night. In the intertidal, tides play a key role in determining temperature of the rock and of bottom-dwelling organisms. For example, it wouldn’t matter that the air is hot if intertidal organisms are covered by water at midday (Figure 2). If you’ve spent a lot of time at the coast, you may have noticed that low tide doesn’t occur at the same time every day. The timing of low tide progresses gradually, varying with location and season. The tidal cycle is predictable, repeating approximately every two weeks. When low tides occur in the night, at dawn, or at dusk, air temperatures are likely to stay cooler and exposed animals are at lower risk of overheating or drying out. But when low tides occur during the middle of the day, as they do in the spring and summer in Washington, rock temperatures can get oven hot. Due to the predictability of the tidal cycle, organisms living in the intertidal zone have a clear cue about temperature risk if they are able to detect and respond to it. 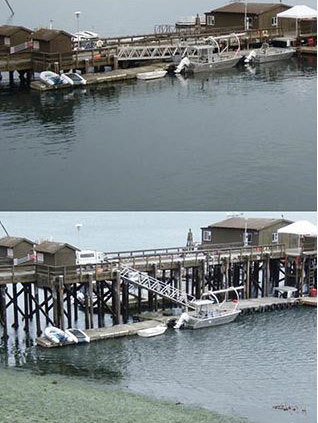 Fig. 2: Extreme high tide at the Friday Harbor Labs dock in June 2012 and the extreme low tide the next morning. This represents a vertical change of almost 12 ft/3 m of water. Photo credit: H. Hayford.

Nucella ostrina is a common intertidal snail that feeds on barnacles and mussels (Figure 3). In the San Juan Islands, its favorite food is the high intertidal barnacle Balanus glandula — subjected regularly to high temperatures and dry air. Barnacles lower on shore are quickly consumed by Nucella ostrina and other predatory species, but those high on shore are prey only to those predators that can withstand the harsh conditions. Nucella takes a risk to feed on Balanus. The process of rasping into the barnacle's shell "test" and ingesting the soft body takes several hours, sometimes days, and almost certainly longer than the duration of a high tide. Because of its limited speed, the snail cannot crawl up to the barnacle buffet with the incoming tide, feed, and retreat to less thermally risky areas with the outgoing tide. However, if the snail were to carefully choose the barnacle buffet on the days of the tidal cycle when the low tides were at night or in the cool early morning, it could take advantage of the food resources without much thermal risk. 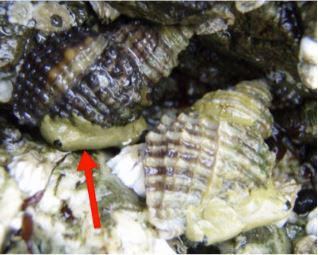 Fig. 3: A pair of the intertidal snail Nucella ostrina in a cool, moist crack. On the backs of their shells radio tags are epoxied (red arrow points to the olive green epoxy on one) so that identity and movement can be tracked. Photo credit: H. Hayford.

I used radio tags to track intertidal snails in their natural habitat. By following them throughout day and night, I learned when they moved into hot, dry high shore areas that offered tasty barnacles not available elsewhere. The really cool thing about radio tags is that they track snails when no researcher is around to observe, for example during high tides and in the middle of stormy nights. These tags are about the size of long-grain rice and stick to the snail shell with a little bit of underwater epoxy. I collected Nucella in their natural habitat and released them wearing little radio tag backpacks (Figure 3). Radio antenna surrounding high shore barnacle areas detected when a snail moved into the area (Figure 4). Next to each radio antenna I placed a temperature logger to estimate the body temperature of a snail present in that location.

I found that snails move into hot, dry feeding areas high on shore only during the days of the tidal cycle that are reliably cool, typically 2-4 days per two-week cycle. This behavior reduces the range of temperatures that a moving snail experiences relative to its surrounding habitat. These findings match experimental studies that my research group in the Carrington Lab and I had previously conducted, and demonstrate a strong pattern detectable in messy nature where dozens of factors are potentially influencing behavior. I don’t know if temperature regulation is the reason that Nucella has this behavior, but this behavior does confer a thermal benefit to the snail. 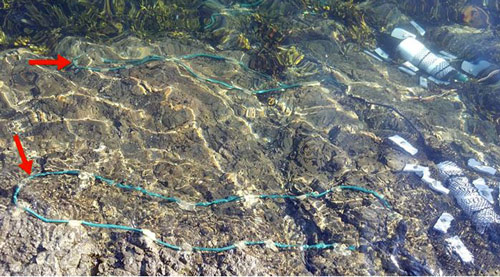 Slow animals move through changing thermal habitats slowly; this is a reminder of the importance of considering temporal and spatial scales. Predictable cycling of environmental factors may be utilized as reliable cues by animals of wildly different movement speeds. When we think about climate change and increasing global temperatures, snails simply aren’t present in the times and places where temperatures get high. If temperatures increase overall, snails are unlikely to be directly harmed. They are, however, in danger of losing their food source. Climate change could lead to higher barnacle death that in turn causes some snail populations to starve.

Hilary did her graduate work on thermoregulatory behavior and tidal cycling in the Emily Carrington Lab (FHL), where she is now a postdoctoral researcher. She spends far more time than the average person with the rocky intertidal, zip ties, and roller skates.